American Farmers Were Already Hurting. Now the Coronavirus Slowdown Might Do Them In

The entrance to Frank and Stacy Konyn's farm in Escondido, Calif. The Konyn's income has dropped 40 percent since the Coronavirus pandemic.
Ariana Drehsler/AFP—Getty Images
By Justin Worland

For many Americans in the agricultural sector, like Monte Peterson, a corn and soybean farmer in North Dakota, the last few years have been tough. A trade war with China isolated farmers from one of their biggest markets, a growing debt crunch strained many of their budgets, and extreme weather that often seemed to alternate between flooding and drought destroyed harvests, one after the other.

A few months ago, Peterson’s prospects seemed finally to be looking up. With planting season approaching and a trade deal between the U.S. and China newly signed, he and other farmers were preparing for significant new demand. “It looked like somehow the corner had turned,” says Peterson.

But the coronavirus pandemic decimated those hopes almost overnight. With stay-at-home orders in place, demand for nearly every agricultural product has collapsed. Restaurants have stopped buying food, purchases of cotton for consumer goods has slowed, and low oil prices have reduced demand for ethanol, hurting corn planters. Some farmers have dumped their product, and others have held off on harvesting it in the first place. Farmer advocacy groups, meanwhile, are warning that American family farms maybe teetering on the brink of collapse.

“You’re dealing with, you know, three, four or five years of terrible prices, then we get a huge pandemic like this,” says Patty Edelburg, vice president of the National Farmers Union. “We’re going to see a lot more family-size farms go out of business.”

Farmers, who are often held up as the iconic American figure, have been on the frontlines of a host of broader policy trends in recent years. While many city-dwelling Americans have been largely unaffected by Trump’s trade war, removed from a volatile energy market, and isolated from the extreme weather driven by climate change, farmers have born the brunt of all three, watching as their finances were repeatedly battered. The coronavirus pandemic is just the latest problem to disproportionately affect this population. Depending on the length and depth of the crisis, this pandemic—and the concurrent recession—may fundamentally reshape the landscape for independent agricultural producers.

State and federal leaders’ decision to shut down much of the U.S. economy in mid-March to prevent the spread of coronavirus has represented a key challenge for American farmers. USDA predicted earlier this month that demand for red meat, poultry, soybeans, corn, wheat and cotton would all sink, while some fruit and vegetable farmers have already halted crop harvests because the product has nowhere to go. Dairy farmers have begun dumping milk. Restaurants are buying only a fraction of the food products they purchased just a few months ago, and discretionary consumer spending has dried up, reducing demand for cotton clothes. Oil usage has also plummeted, killing the market corn-based ethanol. Peterson’s hopes for selling all those soybeans to China — the first country to be hit hard by the virus — all the sudden faced a major roadblock as the country’s economy slowed.

Prices for crops this year are expected to drop by as much as 10% and prices of livestock by as much as 12% as a result of the coronavirus pandemic, according to a report from the Food and Agricultural Policy Research Institute at the University of Missouri. The net income for farmers is expected to decline $20 billion. “In the past month, it’s become probably one of the worst years in history for agriculture,” says Edelburg.

The Trump administration has stepped in to help with $19 billion in funding, relying on a combination of Congressional stimulus and other pre-existing programs and funds. The move includes payments to affected farmers as well as the direct purchase of food products to distribute to food banks to help the millions of unemployed Americans. U.S. Department of Agriculture (USDA) Secretary Sonny Perdue told reporters at the White House Friday that the program would help farmers make it through a period of “unprecedented losses,” but also acknowledged that the funding would not be enough to offset the scale of the damage. “Farmers are seeing prices in their market supply chain affected by the virus like they never could have expected,” Perdue said on a call for journalists after his White House appearance.

Farmers have faced financial hardship before. For decades, they have dealt with volatile prices, fluctuating weather and swings in government policy that left them vulnerable. As a result, many face a debt crunch that experts say threatens the viability of American family farms. President Trump’s tenure has offered little reprieve from the challenges. Most significantly, his trade war with China eroded business with the U.S.’s largest goods trading partner. China agreed to ramp up its purchase of billions of dollars of U.S. agricultural products in January as part of a trade deal with the Trump administration, but the fallout from the coronavirus pandemic has raised questions about whether it will follow through on the commitment.

Unlike previous financial crunches for farmers, this time those economic concerns are coupled with health worries. The coronavirus pandemic struck American coastal cities first, but the virus is increasingly spreading in the heartland, including in big agricultural states like Nebraska, Iowa and South Dakota. Farmers have an advantage in avoiding the virus given that rural population density is low, making for easy social distancing, but some fear the virus will hit agricultural communities hard when it comes.

The average farmer is older than the average American — 57.5 compared to 38 — and rural communities have less access than their urban counterparts to health care facilities and personnel. Nearly 20% of Americans live in rural communities, but less than 10% of American doctors work there, according to a report from the American Hospital Association. Research from the University of Minnesota’s Rural Health Research Center has also shown that while rural residents are more likely than their urban counterparts to suffer from certain respiratory problems, they are less likely to have quick access to a hospital with potentially life-saving ventilators.

“The economic times are what they are, and we can’t deny those,” says Matt Carstens, CEO of Landus, a farmer cooperative in Iowa. But “we have to protect our farmer-owners.”

Illness for farmers is an issue not just for the individuals and families impacted. There are more than 2 million family farms in the U.S. that depend on family members to keep the business running, and illness in the family can wipe out a planting season. “It’s important for us to stay healthy, to remain healthy,” says Stephanie Ballantine, a row-crop farmer in Odebolt, Iowa. “We rely on such a small number of people.”

Peterson says he and his wife have largely locked down on the farm in recent weeks, with his wife only leaving to buy groceries and the pair leaving for church on Easter Sunday. Instead of packing the pews, they stayed in their car in the church parking lot and watched the pastor deliver his sermon on a podium in the distance. The audio streamed from his car radio.

“What’s top of mind for me is the same with everyone,” Peterson says. “You can’t help but think about your personal safety and the safety of your family.” 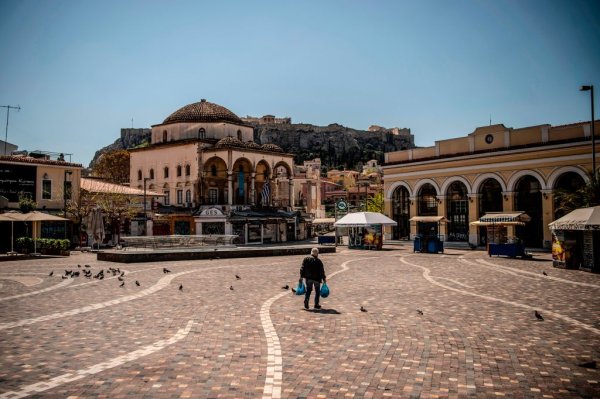 How Greece Avoided the Worst of the Coronavirus Pandemic
Next Up: Editor's Pick