Russian President Vladimir Putin criticized the growing influence of U.S. social media companies and said their impact on society now puts them in competition with elected governments on Wednesday, at the “Davos Agenda” summit organized by the World Economic Forum (WEF).

Putin’s virtual address, his first to the WEF since 2009, comes amid international condemnation over the arrest of opposition activist Alexei Navalny on Jan. 17 and crackdown on mass protests that surged in at least 100 Russian cities and towns last Saturday and saw police detain more than 3,700 people.

The Russian President did not address the protests in his speech. Among the broad range of topics he did discuss — his recent phone call with President Joe Biden, global economic inequality and the coronavirus pandemic — Putin spoke about how the social and economic problems facing the world have the potential to lead to division and public discontent. Big Tech companies posed a particular challenge to “legitimate democratic institutions” over the next decade, he said.

“Digital giants have been playing an increasingly significant role in wider society,” Putin said via videoconference. “In certain areas they are competing with states … Here is the question, how well does this monopolism correlate with the public interest? Where is the distinction between successful global businesses, sought-after services and big data consolidation on the one hand, and the efforts to rule society[…] by substituting legitimate democratic institutions, by restricting the natural right for people to decide how to live and what view to express freely on the other hand?”

His comments about the U.S. apparently referred to American social media companies such as Facebook, Instagram and Twitter imposing a ban on former President Donald Trump after his supporters violently stormed the Capitol on Jan. 6.

His remarks struck an ironic tone given Putin has been making significant attempts to restrict content on social media at home. At the end of December, the Kremlin passed laws that enable the country’s media watchdog Rozkomnadzor to fully or partially block online resources that restrict publicly significant information in Russia, including foreign social media. The laws also impose harsher fines on providers and site owners who refuse to remove information banned in Russia. Penalties for repeatedly refusing to remove banned content will amount to 10 to 20 percent of company revenue, meaning tech giants like YouTube and Facebook could in theory be fined millions or even billions of dollars.

Ahead of Saturday’s protests, Rozkomnadzor demanded that social media platforms remove posts publicising the rallies, warning that they were encouraging minors to break the law. Failure to remove “banned information”—posts encouraging people to join the protests — could result in fines of up to 4 million rubles ($53,000), it said. The warning came as social media was flooded with videos promoting the protests. TikTok videos using the hashtag “Free Navalny” (#свободунавальному) had brought in more than 120 million views. According to a report on Friday from Roskomnadzor, TikTok had deleted 38% of its content with videos about Saturday’s protest, while YouTube and Russian social media site VKontakte has removed half of their content calling on minors to join the rallies and Facebook-owned Instagram 17%.

A Facebook spokesperson, however, said the content remains on the platform “since it doesn’t violate [their] Community Standards.”

Russia has also taken advantage of the power of social media for its own ends. The U.S. government accused Russia of “pervasive” election meddling in the 2016 American presidential election by spreading disinformation through social media. Last summer, the U.K. government said it was “almost certain” Russia tried to interfere in the country’s 2019 general election by illicitly acquiring and leaking government documents on social media platform Reddit. The Kremlin has consistently denied these claims. 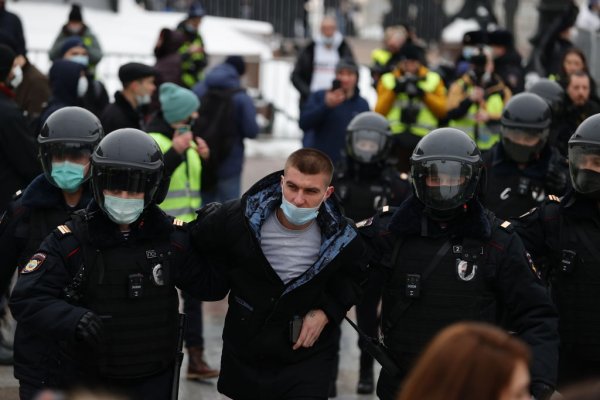