Baseball Legend Hank Aaron Has Passed Away, But His Home Run Record Remains a Lesson in Courage and Commitment

With a single swing of a baseball bat through a misty Atlanta evening in 1974, a fast, gracious stroke that sent a ball soaring over the fence in left center field and knocked Babe Ruth right out of the record books, Hank Aaron—who died in his sleep on Jan. 22 at the age of 86—offered America nothing less than a remedy for its ills. He offered dignity and commitment over putrid cynicism, courage in the face of hatred.

The venom that Aaron faced in the early 1970s was strong as a he closed in on Babe Ruth’s then all-time career record of 714 home runs. Aaron received so much mail—much of it hate mail, filled with death threats—that the U.S. Postal Service gave him a plaque for the flood of correspondence, according to CNN.

“I hope you don’t break the Babe’s record,” read one note. “How do I tell me kids that a [slur] did it.” This note was signed: “KKK (Forever).” “You are not going to break his record established by the great Babe Ruth if I can help it,” read another. “Whites are far more superior than [slur] . . . My gun is watching your every black move.”

In the wake of the civil rights movement of the 1960s, Aaron’s chase for the record laid bare the raw racism prevalent in the early 1970s, and which stubbornly persists today. “Hank Aaron’s home run record exposed America,” says Harry Edwards, the famed sociologist and activist who helped organize the Black power salute at the 1968 Olympics, “and the steepness of the hill to be climbed.”

But despite the deep personal toll the chase laid on Aaron, whose family was also threatened during the ordeal, there he stood on the night of April 8, 1974, bearing down on a fastball from Los Angeles Dodgers pitcher Al Downing, putting 715 into the books. Nearly one in four American television sets were tuned into watch Aaron make history. As he approached second base on his home run trot, stoic — Aaron might have smiled slightly — he slapped hands with Dodgers second baseman Davey Lopes, who offered congratulations. As he rounded the base, two white young men, who seemed to appear out of nowhere, ran alongside Aaron. His bodyguard, up in the stands, considered reaching for the pistol in his binocular case. If Aaron, with tensions so high in Atlanta after receiving so many vitriolic threats, had slugged the teens, reasonable people would have understood why. But the pair just patted him on the chest and shoulder. Aaron kept his calm, continuing his march, undeterred, towards home plate.

“It is over,” said legendary Dodgers broadcaster/poet Vin Scully. “And for the first time in a long time that poker face of Aaron shows tremendous relief … What a marvelous moment for Atlanta and the state of Georgia. What a marvelous moment for the country and the world. A Black man is getting a standing ovation in the Deep South for breaking a record of an all-time baseball idol.”

“I’d just like to thank God it’s over with,” Aaron, who received the Presidential Medal of Freedom in 2002 from George W. Bush, said afterwards.

The racism he faced in the run up to the record might have darkened Aaron’s joy, but, for him, bitterness never lingered. He faced indignities all his life, growing up in segregated Mobile, Ala. “As a young boy, Henry would watch as his father was forced to surrender his place in line at the general store to any whites who entered,” wrote author Howard Bryant in his 2010 biography The Last Hero: A Life Of Henry Aaron.

“When I was growing up in Mobile, Ala., on a little dirt street, I remember my mother about 6 or 7 o’clock in the afternoon. You could hardly see and I’d be trying to throw a baseball and she’d say ‘Come here, come here!’ And I’d say, ‘For what?’ She said, ‘Get under the bed,'” Aaron said in a 2014 interview with CNN. “Then the KKK would march by, burn a cross and go on about their business and then she (my mother) would say, ‘You can come out now.’ Can you imagine what this would do to the average person? Here I am, a little boy, not doing anything, just catching a baseball with a friend of mine and my mother telling me, ‘Go under the bed.'”

As he emerged as a prospect while playing shortstop for the Indianapolis Clowns of the Negro Leagues, at the age of 18, even scouting reports were laden with racism. “Negro ball players as a whole are front runners in my estimation,” read one report. “When ahead they look very good and very bad when behind. However this boy looks very good and if he can make the plays to his left and his right he could be the answer. I feel that he has the ability.”

In 1954, Aaron made his major league debut with the Milwaukee Braves and won Rookie of the Year honors. At six-feet-tall and with a slender frame, Aaron did not fit the prototype of the burly Ruthian slugger; much of his power derived from the speed of his wrists. Throughout his 23-year career, he displayed remarkable consistency, smacking between 24 and 47 home runs in 19 straight seasons. He hit 40 or more home runs in eight different seasons. He hit 44 in 1957 at the age of 23, when the Braves won the World Series, and he hit 40 in 1973 when he was 39. While Barry Bonds broke his home run record in 2007, under suspicion of steroid use, Aaron remains the all-time leader in career RBIs and total bases.

Elected to the Baseball Hall of Fame in 1982, his first year on the ballot, Aaron spent much of his post-baseball life working in the Atlanta Braves front office and building a philanthropic legacy that includes his Chasing The Dream Foundation, which awards scholarships mostly to students attending small historically Black college and universities.

Even amidst the darkest days of the home run chase, Aaron sent letters to fans, thanking them profusely for supporting him. And while his ordeal brought out the worst in some people, his courage also taught millions about the value of acceptance, and respect for the challenges facing many Black Americans. Aaron paved the way for the embrace of a new generation of African-American athletes.

“He was told, ‘don’t take the field or be shot,'” says Edwards. “But he played, in stadiums filled with 50,000 people, out in the open by himself. With that kind of pressure on him, he still got it done. His courage and commitment speaks to the American saga. Over a period of time, this country came to see the broader contribution that Hank Aaron had made. Michael Jordan, Magic Johnson, Kareem Abdul-Jabbar, all of these athletes came through the door that Hank Aaron opened.” 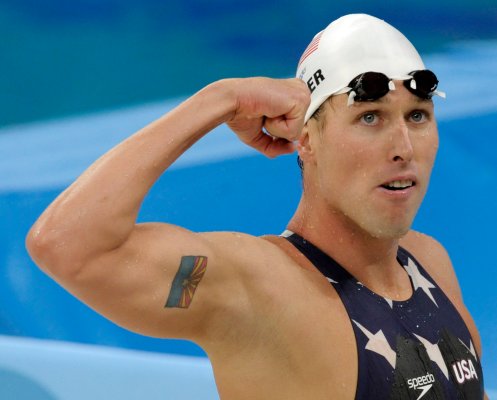