'Museveni Is Scared.' Uganda's Aging Strongman Faces a Challenge from Singer Bobi Wine in an Election Plagued by Unrest

Bobi Wine parades through crowds of people in Kayunga District on Dec. 01, 2020 in Jinja, Uganda
Getty Images
By Aryn Baker

Accompanied by a slickly produced music video featuring some of the nation’s most popular musicians, Uganda’s pop-star turned presidential candidate promises an end to dictatorship, to discrimination, to corruption, to dysfunctional hospitals and to maternal mortality. But the likelihood of the 38-year-old getting to make his promises a reality appears slim, as voters go to the polls on Jan. 14 in an election plagued by repression, voter intimidation and violence.

Wine, whose real name is Robert Kyagulanyi, is one of 10 candidates challenging 76-year-old President Yoweri Museveni, a former general who has been in power since 1986 and who has no intention of stepping down any time soon. He lobbied to lift the constitutionally-mandated age limit for the presidency just as he was about to surpass it, ensuring a continued grip on power. Now that he has the right to run again, Museveni and his ruling party, the National Resistance Movement, are determined that he will win at any cost.

READ MORE:Why Uganda’s Bobi Wine Is Putting His Future on the Line for a Shot at the Presidency.

That determination has played out in increasingly bloody ways. Police crackdowns on opposition rallies over the past several months have left scores dead. Opposition candidates and their supporters have faced ongoing intimidation campaigns, including threats to their families. In mid-November Wine and fellow candidate Patrick Oboi Amuriat were arrested on charges of flouting Covid-19 regulations, sparking country-wide protests that saw at least 54 people killed. Since then, both foreign media and election monitoring organizations have been kicked out of the country, while civil society organizations have seen their bank accounts frozen under opaque allegations of anti-government activities.

The pressure on Wine, by far the best known of Museveni’s rivals, has intensified as the election drew closer. On Jan. 7, police swarmed his vehicle as he was giving an online press conference, firing tear gas and shooting in the air as they dragged him from the car. Wine had been discussing his petition to the International Criminal Court to investigate alleged abuses by security forces in the run up to Uganda’s election. He was eventually released. Wine tweeted on Tuesday that soldiers had raided his Kampala home, arresting his security guards and killing a driver. The police deny the allegations. Later that day the streets of Kampala filled with military vehicles and personnel, some of whom were captured on video assaulting Wine’s supporters.

Wine has been a thorn in Museveni’s side ever since he transitioned from a hip-hop star to a social activist calling for better leadership and more opportunities for Uganda’s youth. In 2017 he won a seat in parliament, where he started agitating for a change in leadership. The greater Wine’s popular appeal grew, the more Museveni disparaged him. In a recent interview, he insinuated that Wine was supported by the West to promote homosexuality, a potent dog whistle in a country where homophobia is still deeply entrenched, and where homosexuality is widely seen as a foreign import. “He gets quite a lot of encouragement from foreigners and homosexuals,” Museveni said in the interview. “Homosexuals are very happy with Bobi Wine. I think they even send him support.”

READ MORE: How Uganda’s LGBT Community Is Fighting for the Right to Exist

Disinformation has also spread online. On Jan. 11, Facebook shut down the accounts of several Ugandan government officials linked to the ministry of information and communications technology, accusing them of manipulative messaging. “They used fake and duplicate accounts to manage pages, comment on other people’s content, impersonate users, re-share posts in groups to make them appear more popular that they were,” Facebook’s head of communication for sub-Saharan Africa, Kezia Anim-Addo, told AFP. “Given the impending election in Uganda, we moved quickly to investigate and take down this network.”

A day later, the government blocked access to social media platforms country wide. Museveni defended the shutdown in a televised address, saying it was in response to the Facebook ban, and insisting that he would not tolerate the “arrogance” of social media companies deciding “who is good and who is bad” in Uganda. While he didn’t mention the election directly, a countrywide social media ban is also an effective way to block opposition campaigning, or even election oversight by citizens.

“This time, Museveni is scared,” says a resident expert on Ugandan politics who is currently working with the European Union on Uganda’s election, and who asked not to be named given the sensitivity of speaking out at the moment. Past elections, while marred by accusations of intimidation, bias and corruption, were never so bad that journalists were kicked out or civil society organizations prevented from operating. “This year, we are seeing a considerable ratcheting up of oppression and intimidation.” One of the reasons, he notes, could be the groundswell of support going to Bobi Wine.

While a recent Afrobarometer poll shows Museveni in a clear lead ahead of Wine, with 50% of voters compared to Wine’s 19%, it’s not enough to ensure that the election won’t go to runoff — an eventuality that experts say Museveni can’t afford. “Museveni’s campaign is based on the inevitability that he will be elected, so people won’t risk voting against him if it’s clear he is going to win. But if Museveni doesn’t get victory in the first round, it’s like the proverbial emperor who has no clothes,” says the Uganda politics expert. For that reason, he will do whatever is necessary to make sure the first round is his.

Foreign NGOs and election organizations appear to share his concerns. Already the United Nations has warned that the political conditions in Uganda are preventing the likelihood of a free and fair presidential election. Spokeswoman for the U.N. High Commissioner for Human Rights, Ravina Shamdasani, told Voice of America that the deteriorating human rights situation in the country is likely to discourage people from voting, raising the prospect of continued unrest after the election. “Numerous human rights violations have been reported, including of the rights to freedom of expression, peaceful assembly and participation, as well as arbitrary deprivation of life, arbitrary arrest and detention, and torture. … Indeed, harassment, ill-treatment, arbitrary arrests and detention of opposition candidates and supporters have been worrying developments during the electoral campaign.”

Ugandans appear to be resigned to such an outcome as well. A late 2020 Gallup poll showed that a majority (62%) said they did not have confidence in the honesty of their country’s elections, while confidence in their national government slipped from 48% in October to 36% by the end of November. “Ugandans feel more tense with each day that brings it closer to the election. Amid widespread intimidation from security forces and a new social media blackout, the atmosphere is defiant, though most believe there still remains no way to unseat the incumbent through elections,” says Jay Loschky, the Gallup Regional World Poll Director for Africa.

For his part, Wine still thinks his campaign for a new era in Ugandan leadership will bear fruit, eventually. As the chorus of his campaign song says, “When the struggle is over we shall wear the victor’s crown.” He never specified exactly how long that struggle would last. 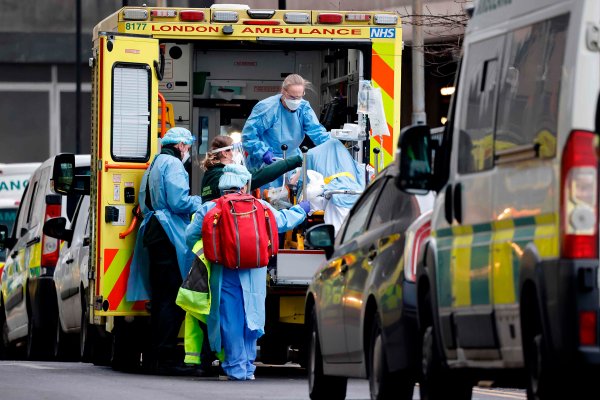