On Jan. 5, the nation’s eyes were locked on Georgia, as the state’s voters decided the fate of the next U.S. Senate in two tight runoff races. By the next day, as a pro-Trump mob stormed the Capitol Building in D.C., few took notice of the fact that another extraordinary scene was unfolding in Atlanta. Georgia’s Secretary of State Brad Raffensperger and his staff left Georgia’s statehouse—surrounded by state troopers— as a group of about 100 pro-Trump protesters gathered outside the building, some of them armed.

Both President Donald Trump and the two Republican candidates who lost in January’s Senate runoffs had repeatedly called for Raffensperger’s ouster, based on unfounded claims of fraud in the presidential election. Georgia’s Capitol Police say Raffensperger was not “evacuated,” and note no one was arrested in connection with the incident. But Georgia’s voting system implementation manager Gabriel Sterling told the Associated Press, “We saw stuff happening at the Georgia Capitol and said we should not be around here. We should not be a spark.”

The voting officials’ rushed departure that day is part of a swift political backlash in Georgia since President-elect Joe Biden and two Democratic Senators flipped the red state blue. While Trump supporters in the state who believe the election was stolen gather in public and social media platforms, Republican lawmakers in the legislature have turned their attention to establishing a host of new voting restrictions they say are necessary to prevent future fraud and “secure (the) electoral process.”

Voting rights advocates say the proposed changes are part of a long-running effort to disenfranchise Black voters, particularly by limiting absentee voting. The raft of measures would make it harder to vote, they say, disproportionately impacting minority and working-class voters, as well as the elderly, disabled and anyone who has a 9 to 5 job or needs additional childcare.

They are also monitoring other possible requirements floated by Republicans, including for absentee ballots to require a signature match, verified by a Notary Public, as reported by 11Alive News, the elimination of mobile voting buses during early voting and cracking down on line warming, in which non-partisan groups provide people waiting to vote things like water, snacks and folding chairs. The Secretary of State’s office has said line warming is an attempt to “influence voters in the crucial final moments before they cast their ballots.”

Democrats worry the measures could reverse their recent gains in the state by putting up roadblocks for Georgia’s coalition of voting rights groups—many of them led by Black women—that played in a pivotal role in boosting turnout and flipping the state. That could render the Democratic majority in the U.S. Senate short-lived; Raphael Warnock, one of the Democratic Senators who secured a seat in January’s run-offs, will be among those facing reelection in 2021.

“Trump has really poisoned the well”

So far, the proposed restrictions have varying degrees of support from Georgia Republicans, who wield significant power as they make up the majority in both chambers of the state legislature.. The proposal to end no-excuse absentee voting has already won the support of Raffensperger, who says the practice is too resource intensive. But the effort does not have all key Republicans on board yet. House Speaker David Ralston still has his doubts, and Lt. Governor Geoff Duncan has also called eliminating the measure a “step in the wrong direction.” Governor Brian Kemp has previously voiced support for adding photo ID requirements for absentee ballots but has said he’s “reserving judgment” on attempts to end no-excuse absentee voting and banning ballot drop boxes, according to the Atlanta Journal Constitution. Kemp’s office declined to comment.

Georgia has had a no-excuse absentee voting policy in place for more than 15 years. As in other states, voters’ use of the method shot up in Georgia last year shot up because of the need for safe voting options during the pandemic. But voters also found it to be convenient, and voting experts say it’s likely that the voting method’s popularity will outlast the current health crisis. Of more than four million votes cast in Georgia’s 2020 presidential election, over 1.3 million were mail ballots—more than five times as many than those received in the 2016 general election, according to Georgia Votes.

Due in part to Trump’s sustained attack against mail-in voting ahead of the election, mail-in ballots expanded use likely ended up benefiting Democrats, says Michael Kang, a voting rights expert and professor at Northwestern University. The sudden Republican support to end no-excuse absentee voting is a clear “reaction to this past election cycle,” he says. “Historically, absentee voting had been relatively popular with both parties and—if anything—benefited Republicans more… But now, Trump has really poisoned the well when it comes to mail balloting (and) polarized the issue.”

Raffensperger has not linked the increase mail-in voting to fraud or electoral systems abuse, and he told the President himself that he felt Georgia’s election was free and fair. But he has supported an end to no-excuse absentee voting for other reasons, saying in a December statement that it’s just “too much to manage” in “addition to three weeks of early, in-person voting and election day.” The statement from Raffensperger’s office said that the current method “strains county resources and budgets.”

Some voting rights advocates and experts don’t buy that reasoning. “It’s bull,” says Carol Anderson, chair of African American Studies at Emory University in Atlanta. “So what we’re saying is that when you know you’ve sent out XYZ millions of ballots and you know the kinds of statistical returns you’re going to have on that, that you’re not going to provide the staffing to handle it?”

She feels lawmakers’ sudden interest in alleged fraud in mail voting is entirely politically motivated. “It was the use of those absentee ballots, particularly by folks who haven’t used them before that…helped flip the state blue,” she says. “Let’s be real clear here. The Republicans would not be looking at this if… you hadn’t had the use by African Americans of mail-in voting absentee ballots.”

Aklima Khondoker, Georgia state director for All Voting is Local, agrees that making voting harder is not the answer to easing election workers’ burden. “The solution must be to support the workers that are doing this work so they can continue to do it (and) voters can continue to enjoy access to the ballot,” she says, adding that means hiring more poll workers and instituting more robust training.

Christopher Bruce, political director of the ACLU of Georgia, says one “easy” solution to start lightening the burden on election workers is to change the Georgia law that only allows officials to start counting absentee ballots until the day of the election. “While these votes are trickling in, you can already start counting them,” he suggests.

Georgia’s polling locations have been cut by almost 10% since 2013 even as there have been an almost two million people added to the voting rolls, according to an analysis by ProPublica and Georgia Public Broadcasting. The ACLU of Georgia sued the state in 2019 for “failing to provide sufficient resources to provide enough polling places, voting machines, and staff to run a proper high-turnout election.” They lost in federal court.

“We’ve been here before.”

Voting rights groups say the atmosphere in Georgia has been increasingly tense in recent months as they’ve worked to get out the vote. Aunna Dennis, executive director of Common Cause Georgia, has been wary of what she describes as “angry mobs” at the Capitol, explaining that “there has been a hostile presence with the Stop the Steal rallies.” As a Black woman, she feels particularly unsafe around the area which she is used to visiting as she does her election protection work, she adds.

On the same day that the statehouse in Atlanta was surrounded by Trump supporters, and where Capitol Police made no arrests, 23 people were arrested during a nearby protest over the Wisconsin prosecutor’s decision not to file charges against the police officer who shot Jacob Blake. Most of the protesters were charged with “obstructing traffic,” according to the Atlanta Police Department. A police report said that “the group threw a rock at his patrol vehicle.”

The disparity between arrests being made at that protest but not the Capitol incident “shows us that when communities protest against anti-black violence they’re met with police brutality, but when white insurrectionists hijack the US capitol they’re met with police patience,” says Sara Totonchi, executive director of the Southern Center for Human Rights.

Anderson says the backlash against absentee voting in the Georgia state legislature is part of a well-worn pattern of disenfranchising Black voters. “We’ve been here before,” she says. When Indiana flipped for Obama in 2008, she says, “Republicans clutched their heart. As they started hunting and looking, what they found was that African Americans had used early voting. And so the Republicans began implementing a series of laws to clamp down on early voting in Black communities and they did it race neutrally.”

Decades earlier, in Pickens County, Alabama in the late 1970s, two Black women and civil rights activists—Maggie Boseman and Julia Wilder—had worked to encourage the use of absentee ballots in the Black community. “In doing that, the state came down hard on them for voter fraud and Maggie and Julia were sentenced to prison,” Anderson says. Then, of course there was Jeff Sessions’ bout with the Marion Three in 1985 while he was U.S. Attorney in Alabama, in which he used his powers to go after Black voting rights activists, accusing them of tampering with mail-in ballots.

“When Black people have used absentee ballots, the language of voter fraud and ‘we’ve got to shut this thing down’ (comes back,) Anderson says. “Georgia is using the old playbook.” 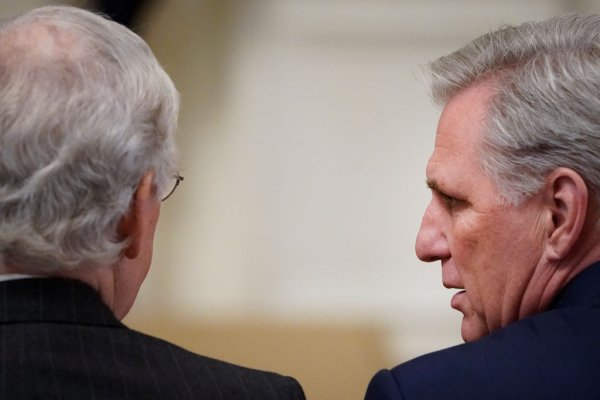 GOP Leaders Seem to Want a Trump Divorce. But They Can’t Bring Themselves to Sign the Papers
Next Up: Editor's Pick