There's No Single Domestic Terrorism Statute. But Those Involved in the Riot at the Capitol May Still Be Prosecuted Under These Laws

The FBI defines domestic terrorism as “Violent, criminal acts committed by individuals and/or groups to further ideological goals stemming from domestic influences, such as those of a political, religious, social, racial, or environmental nature.” Its leadership concedes that most of the concern centers on white supremacist groups. We saw that Wednesday as rioters charged the Capitol building with Confederate flags and Nazi paraphernalia on full display.

Still, even though the FBI tracks domestic terrorism, there isn’t one law that makes it a crime. But there are plenty of statutes federal prosecutors can use in the fight against it. In the absence of specific statutes, like the ones written to combat foreign terrorism, the entire criminal code becomes part of the prosecutor’s playbook. So what laws might we expect to see prosecutors use after Wednesday?

As federal law enforcement assesses the intelligence failures that left Congress unprotected and tries to sort out the myriad crimes captured on videotape, the challenge will be developing a prosecution strategy that serves to uncover the truth about what happened and that holds those responsible accountable. There will likely be simultaneous investigation into different groupings of criminal conduct.

First, there should be a much-needed hard look at whether there are people who should be held responsible–in the criminal sense, not the political sense, for the need for the latter seems quite obvious–for Wednesday’s events as organizers and leaders of the insurrection. There will also be people who committed serious standalone offense that involved violence and risks to public safety. And there will be a group, likely the largest number of people, who overran the Capitol and need to be held accountable, albeit at a lower level, for their acts.

Each federal statute has a series of elements that the government must be able to prove beyond a reasonable doubt before anyone can be adjudged guilty of a crime, and it’s important that we hew to the principle of innocence until proven guilty, even and perhaps especially in the face of this week’s events. Here are some of the statutes federal prosecutors will undoubtedly use in their consideration of whom to prosecute.

It’s a crime for two or more people to agree to try — they don’t have to actually accomplish their illegal objective — to interfere with the central functions of our government. The statute specifically contemplates that it’s a crime to delay or hinder the enforcement of laws, and since the goal on Wednesday was to prevent Congress from formalizing President-elect Joe Biden’s win, it’s possible that on the more serious end of the spectrum, we could see charges of seditious conspiracy, which carry a 20-year maximum sentence.

Solicitation is a crime that involves procuring another person to commit a crime for you. The federal statute is limited to solicitation of crimes that involve the use of force against people or property. We saw plenty of that on Wednesday. The key issue here is likely to be whether there is evidence that anyone involved in the pro-Trump rally Wednesday morning or earlier efforts to get people to Washington, D.C., for the day intended that they would overrun and damage the Capitol building rather than engaging in peaceful assembly and protest. If prosecutors secure evidence of intent, which could be available, for instance, in the form of prior statements captured on videotape, anyone who “solicit[ed], command[ed], induce[d], or otherwise endeavor[ed] to persuade” other people to participate in the insurrection could be sentenced to up to half as much time as the sentence the law provides for the crimes that were committed.

There are a range of federal provisions that could apply here, depending on the evidence prosecutors develop. Already, we’ve seen the horrible shooting death of a rioter, the violent death of a Capitol police officer and the torture of another officer, who was slammed between closing doors by rioters. If the deaths are prosecuted under federal law, which is likely because they occurred in the Capitol building and in at least one case involved a federal officer, the charges will be for murder if there was malice aforethought. That means either an intent to kill or a depraved disregard for human life that led to the death. This type of charge seems most likely given what we already know, although there are lesser charges involving manslaughter available if death results from the heat of passion, extreme carelessness or some other circumstance that doesn’t rise to the level of murder. The most serious form of murder would involve premeditation in advance of the killing and would subject a person convicted of the crime to capital punishment or life in prison.

It’s also likely that there will be assault charges against people who threatened and attacked others. Assault with a deadly weapon, which could include the use of items we don’t typically think of as weapons in a way likely to inflict serious injury, is a possible charge. Slamming doors repeatedly against a police officer or attacking with flag poles and other items people carried into the Capitol could qualify. Assault with a deadly weapon carries a penalty of up to 20 years in prison.

Again, depending on the evidence that develops, there is a broad range of charges prosecutors may consider. It is a crime to conspire or attempt to kill or kidnap a member of Congress. Entering into a conspiracy to do so, even if the crime itself is not completed, could lead to a sentence of up to life in prison. It’s also a crime to convey an interstate threat to kidnap or harm an individual, and charges in this regard have already been filed against one man in connection with a threat against House Speaker Nancy Pelosi.

Prosecutors in the District of Columbia have already brought charges against an Alabama man for “possession of an unregistered firearm (destructive device) and carrying a pistol without a license.” Because it’s illegal to possess a firearm in the District, it’s likely that we’ll see many more local charges like this. In addition, certain categories of people, for instance those with previous felony convictions, are prohibited from possessing firearms or ammunition under federal law and could be subject to charges on that basis.

On the most serious end of the spectrum here, bombs were found at the Democratic National Committee and Republican Nation Committee headquarters on Wednesday. Identifying the person or people responsible will be a high priority for law enforcement. They will want to make sure no additional bombs remain in circulation and that any materials or facilities used for bombmaking are confiscated and rendered safe. Even absent charges of a scheme to use the bombs in an attack, it’s a crime to transport or receive explosives knowing they’re intended to harm people or property. Anyone who commits this crime can be sentenced to up to 10 years in prison.

5. Interstate Travel in Aid of Racketeering

Federal law prohibits travel in interstate commerce to conduct or promote criminal activity. As news spread on Wednesday, U.S. Attorneys across the country took to Twitter to commit to prosecuting anyone who traveled from their districts to Washington, D.C., to commit crimes. Travel to commit a crime of violence carries a penalty of up to 20 years, while lesser violations of the statute are punishable by up to five years of custody.

Federal law prohibits engaging in violence toward people or property within “a restricted building or grounds,” or entering the building or grounds with the intent to disrupt government business. There is a panoply of charges ranging from entering or remaining in a restricted area without permission to doing so to impede government business. Prosecutors in D.C. have already begun to charge people with entering and remaining in restricted areas, a misdemeanor charge that carries a sentence of up to one year in prison. Custody of up to 10 years is authorized if perpetrators use or carry a deadly weapon or if anyone is seriously injured in connection with the offense.

Prosecutors have already begun to charge violations of local D.C. laws in superior court, including unlawful entry, curfew violations and firearms-related crimes. These types of violations will be reserved for the least culpable participants on Wednesday.

Expect to see prosecutors use the full range of statutes available to them to hold people accountable. Inquiry into who was responsible for organizing events, who funded travel and other activity essential to Wednesday’s insurrection, and what they intended to accomplish, is only beginning to take place and we don’t yet know where it will lead. But the absence of a statute that is specific to domestic terrorism will not impede prosecutors’ progress, given the range of offenses that appear to apply, based simply on what we’ve seen in the press. It’s also important to note that the statutory sentences discussed here are ceilings, the maximum sentences federal judges can impose. Under sentencing guidelines, actual sentences are often significantly lower.

Robust investigation and prosecution is critical to creating accountability for this unprecedented attack on the republic. Important goals of the criminal justice system, including incapacitating people who are dangerous to others and deterring future criminal conduct, are at stake. Free speech is among the most sacred rights in our democracy. But when language spills over into violence and the peaceful transfer of power in our country becomes the target of an angry mob, we have to hold wrongdoers accountable. 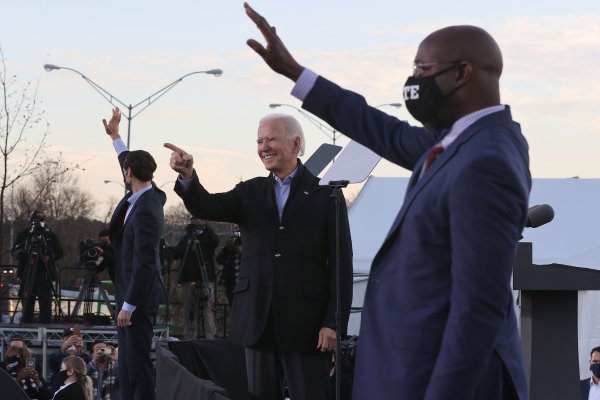 It's Time to Tell a New Story About the South
Next Up: Editor's Pick