By Vera Bergengruen and W.J. Hennigan

After months of tense anticipation, Nov. 3 came and went in the United States without major incident of violence or intimidation—much to the relief of voters, voting rights groups and law enforcement. But as President Donald Trump’s numerous lawsuits to overturn the election results failed, a new inflection point in his frenzied campaign emerged: Jan. 6, the day Congress is set to certify his loss to Joe Biden.

To Trump’s most fervent supporters, from button-down Republican lawmakers and conservative personalities to rifle-wielding militias and far-right extremists, Wednesday is seen as the day to mount a “final stand” to keep the President in power, despite his clear electoral defeat. As lawmakers loyal to Trump prepare to challenge the election’s certification on Capitol Hill, pro-Trump online groups have been touting the date as a decisive moment for his supporters to show their loyalty. The demonstrations, which began Tuesday, are the culmination of the ongoing “Stop the Steal” protests rallying around the President’s false claims that mass voter fraud cost him the election.

Trump has been encouraging supporters to come to D.C. for weeks, prompting accusations that he is inciting extremist groups to possible violence. On Twitter, Trump has called Jan. 6 a “historic day” that will be “wild!” He has also hinted he may personally appear.

“As he continues this incendiary rhetoric, he’s inciting his supporters and inflaming the situation,” says Chuck Hagel, Defense Secretary under President Obama and former Republican Senator from Nebraska who signed a recent letter with the other nine living former defense secretaries that Trump’s election fraud claims are dangerous. “I’m concerned about violence.”

Trump’s supporters’ hopes are also being fueled by at least 140 House Republicans and 12 Senators who say they are planning to vote against counting the electoral votes that would officially certify the election for Biden on Wednesday. “Our presence in Washington D.C. will let Members of Congress know that we stand with Rep. Mo Brooks and his colleagues in the House of Representatives who will bravely object to the certification of the Electoral College,” says the website for one of Wednesday’s rallies organized by “Stop the Steal.”

Even in Washington, a city well-accustomed to a wide variety of protests, the mix of participants expected on Wednesday is at once surreal and worrisome, say law enforcement officials and extremism analysts. Republican officials and MAGA celebrities will join far-right groups, conspiracy theorists and self-styled militias – all of which have different ideas about what, exactly, constitutes this “final stand.” While members of Congress are tweeting about “defending democracy,” some online forums and messaging app participants are discussing “armed Americans” seizing the capital, hanging politicians, how to evade D.C. gun laws, and urging protestors to bring “as much ammo as you can carry.”

Workers set up a staging area near the White House ahead of a pro-Trump rally in Washington, D.C., on Jan. 5, 2021.
Erin Scott—Bloomberg—Getty Images

Downtown D.C. is braced for the worst. Shops and restaurants have been sheathed in plywood. Signs have been posted along major avenues to remind passers-by about D.C.’s strict gun laws. The downtown Hotel Harrington, which had become a gathering spot for far-right extremist groups during past pro-Trump rallies, said it would be closed during the protests. In a memo from the House of Representatives’ sergeant-at-arms, lawmakers were advised to use underground tunnels instead of public streets around the U.S. Capitol.

On Tuesday, some 340 troops with the D.C. National Guard began to take positions around the nation’s capital. Under a mission named Task Force Guardian, the forces plan to set up posts at several Metro train stations and provide back up to police with street closures. A specialized National Guard team trained on threats associated with chemical, biological, radiological, nuclear, and high yield explosives will also be standing by. At Bowser’s request, the Guard members will not be armed in an attempt to avoid a rapid escalation of violence. The so-called “Million MAGA March” on Dec. 12 ended with 33 people arrested, eight D.C. police officers injured, and at least four people stabbed in an after-dark clash with counter-protestors.

Some extremism researchers say this week’s rallies could attract larger numbers of more extremist participants than recent demonstrations, due in part to the apocalyptic importance these groups have given to Wednesday’s certification. Among the groups who have said they will attend are the Proud Boys, a far-right extremist group that has become a fixture at recent pro-Trump rallies after pledging allegiance to Trump when he told them to “stand back and stand by” during a presidential debate in September, which was received as a call to arms.

“Proud Boys have been showing up to events for years, the only difference now is that Trump name-checked them during a debate so now people know who they are and the media is covering it more widely,” Meghan Squire, a computer science professor at Elon University who tracks online extremism, tells TIME. “The media coverage and Trump’s attention are both emboldening these groups.”

The group’s leader was arrested Monday night after he arrived in Washington and, facing charges for burning a Black Lives Matter banner that was torn down from a D.C. historic Black church last month, has been banned from the capital, according to Associated Press. He had previously announced that the group’s members would “be incognito” and “spread across downtown DC in smaller teams” on Wednesday, adding they might not wear their distinctive yellow and black clothing in order to blend with counter-protestors.

The Oath Keepers, a self-styled anti-government militia, has also said they have teams “rolling into DC from all over the nation” and would be “boots on the ground” to protect protestors. “It is CRITICAL that all patriots who can be in DC get to DC to stand tall in support of President Trump’s fight to defeat the enemies…who are attempting a coup, through the massive vote fraud and related attacks on our Republic,” the group said in an online post.

Pro-Trump groups have organized caravans that are stopping in at least 20 cities on their way to attend the rallies in DC. The Eighty Percent Coalition, a new group whose name refers to the percentage of Republicans who have said in some recent polls they do not believe the election results, filed a permit with the National Park Service for a protest of roughly 10,000 attendees. Women for America First, which has organized some previous rallies, filed a request for a permit for 5,000 protestors at Freedom Plaza.

D.C. Mayor Muriel Bowser warned residents to stay away from downtown Washington on Tuesday and Wednesday and “not to engage with demonstrators who come to our city seeking confrontation.” D.C. Attorney General Karl Racine, who acknowledged in a television interview that his own “anxiety is high,” similarly urged residents in a statement to “keep the peace, rather than provide this band of agitators any more attention than their divisive and hateful demonstrations will otherwise receive.”

Over the weekend, the ten living former American secretaries of defense collectively signed an unprecedented letter, stating in blunt terms that the 2020 presidential election is over, the time for protests is past, and that the continued pursuit over claims of election fraud is perilous. “Efforts to involve the U.S. armed forces in resolving election disputes would take us into dangerous, unlawful and unconstitutional territory,” they wrote. “Civilian and military officials who direct or carry out such measures would be accountable, including potentially facing criminal penalties, for the grave consequences of their actions on our republic.”

Hagel says one of the main reasons he signed onto the letter was Trump’s “dangerous threats” to invoke the Insurrection Act, which would allow him to deploy the military, when civic unrest broke out after police killed George Floyd last summer. “We all come from different political backgrounds and different political parties, but we all agreed that we needed to speak up about the President’s erratic behavior,” he says.

While National Guard units prepare to deal with protests in D.C., violent protests are just as likely to break out in other parts of the country. “Who knows what can happen?” Hagel says. “It’s not isolated to Washington, even though it’s the focal point of where the action and tension is going to be on Jan. 6. This sort of violence can happen anywhere in this country now—and that’s what’s so alarming.”

—With reporting from Brian Bennett / WASHINGTON

Write to Vera Bergengruen at vera.bergengruen@time.com and W.J. Hennigan at william.hennigan@time.com. 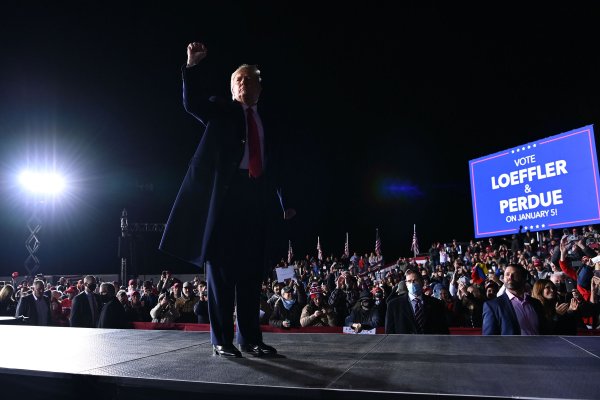 Why Republican Lawmakers Are Dividing Into Two Camps Over Election Reality
Next Up: Editor's Pick