Can a 2-Week 'Circuit Breaker' Lockdown Curb COVID-19? The U.K. May Be About to Find Out

The coronavirus is having its way with the United Kingdom—a fact that is told starkly by the numbers. The 21st most populous country in the world, the U.K. is 11th in total number of COVID-19 infections—and climbing fast. Its daily infection rate is doubling every seven to eight days in some regions, more people are now hospitalized there than on March 23 (when the country went into general lockdown), and in some regions, hospital beds and intensive care units are at 90% capacity. With cold weather coming on and flu season beginning, things look darker still.

“We could sleep-walk into a long and bleak winter,” warned opposition Labour Party leader Sir Keir Starmer in an address last week.

The answer, hard as it may be to sell to a COVID-weary public, is another lockdown—sort of. British policymakers are increasingly turning to what’s known as a “circuit-breaker” strategy: a short, sharp lockdown of just two to three weeks to get ahead of the virus and, if nothing else, buy a little time.

Some parts of the U.K. are already introducing them. On Monday, Wales announced a “fire break” lockdown for two weeks from Friday, with residents ordered to stay home wherever possible. Both Scotland and Northern Ireland have shut pubs and restaurants and limited travel, and are considering even stricter regulations. Now the national government in Westminster is being urged to introduce blanket restrictions on the entire country.

The idea’s advocates argue that it has multiple advantages: It hits the brakes hard and fast on the pandemic’s spread; it eases the pressure on the National Health Service (NHS) and its hospitals; and it imposes restrictions with a known end date, making compliance among the general public far likelier than it was during the earlier quarantine period, which ran on indefinitely.

“The biggest difficulty people have is the uncertainty,” says Michael Tildesley, professor of infectious disease modeling at the University of Warwick. “If you can say to them, ‘O.K., you do this for two to three weeks and come hell or high water we’re going to lift the restrictions afterwards,’ you have a greater likelihood of compliance.”

It’s not just psychology in play here. It’s economics, too. “For businesses, the certainty of when and how long they will be closed gives room for planning, and for government to put in the appropriate financial support,” says Graham Medley, professor of infectious disease modeling at the London School of Hygiene and Tropical Medicine.

The biggest epidemiological goal of the circuit breaker approach is to reduce what’s known as the R of the pandemic—the number of people any one infected person goes on to infect in turn. When the R is above one, you’re in an exponential growth phase; when it’s below one you flip to a state of exponential reduction. Switching from above one to below one even for a short period is a powerful way to buy time.

Indeed it does. As a study by the Welsh government points out, trading two weeks of viral increase for two weeks of viral “decay” could put the pandemic back by 28 days or more. That could not only curb the infection rate, but save a lot of lives. According to estimates by Medley, a two-week lockdown would lower deaths from 79,800 at their current projected rate to 39,300.

“The rise in hospitalizations, and then deaths, is exponential,” says Medley. “Health systems cannot cope even with the early stages of these epidemics. Any kind of break or lockdown reduces transmission.”

If a nationwide circuit-breaker move is going to happen, it is likely to happen soon. Schools in much of the U.K. begin a mid-term vacation Oct. 26, meaning lockdown could come at a time when students wouldn’t be in class anyway. Parents should benefit as well, since they would not be scrambling for childcare alternatives. Most importantly, the children could benefit not just physically—reducing their risk of exposure to the virus—but psychologically.

“I believe strongly that there is long-term damage to kids from spending too much time out of school,” says Tildesley.

Key to making a national circuit-breaker period work is managing expectations and messaging smartly. The two-week period of any short-term quarantine is more or less the same as the incubation period for the virus, which means that throughout that entire fortnight, infection rates would keep right on rising, as people who contracted the virus before the lockdown begin testing positive. The government is thus well-advised to make it clear to Britons that they should not expect to see any benefits from the circuit-breaker approach until after the quarantine ends.

Epidemiologists, who know better how to read the numbers, may benefit from a short-term lockdown too. As the wildfire of national infections abates it can be easier to identify local brushfires, improving contact tracing and giving the NHS a better sense of how to mobilize its resources.

The British public seems in favor of some kind of dramatic measure. According to The Telegraph, 54% of Britons surveyed on Oct. 13 said that the government should have imposed a lockdown in September, against just 28% who did not. A circuit-breaker, with its limited scope, would seem to be both a political and epidemiological winner—but only as long as that end point is honored.

“My worry,” says Tildesley, “is that the lockdown will keep getting extended and people will say, ‘I’m not doing this anymore.'” A circuit breaker with an off setting is no good at all if it doesn’t have an honest on as well. 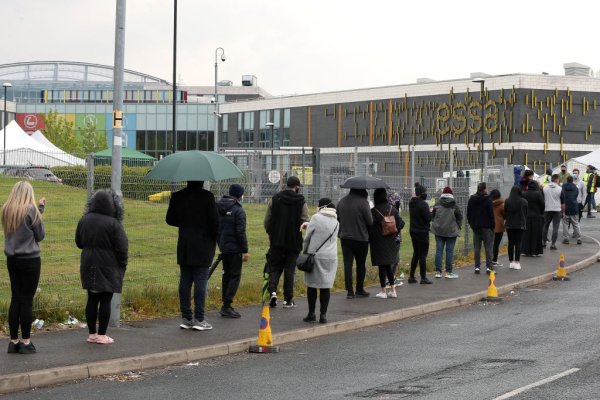 U.K. Readies for Reopening but COVID Variant Sparks Worry
Next Up: Editor's Pick