This Indian Same-Sex Couple Is Fighting for the Right to Marry. But Is Their Country Ready?

Kavita Arora and Ankita Khanna’s love story is like any other. They met at work, fell in love and—over eight years, they moved in together and built a life in New Delhi.

But as a same-sex couple in India, their relationship was a crime until a 2018 ruling by the supreme court. Despite that landmark judgment, Arora and Khanna’s relationship has no legal status—making it difficult to transfer property rights, make medical decisions for each other in case one is incapacitated or, in short, enjoy rights heterosexual married couples in India take for granted.

“We have created a great life together, but where is the legitimacy to that?” Khanna tells TIME.

In October, they petitioned a Delhi court for the constitutional right to marry—arguing that without official recognition, they are “strangers in law.” Their petition, along with two others, will be heard by the court starting Jan. 8, beginning what could be a years-long legal battle for marriage equality for the more than 2.5 million Indians who identify as LGBTQ.

Victory is by no means assured—there is already resistance from religious groups and the top lawyer for Prime Minister Narendra Modi’s government has advocated against legalizing same-sex marriage. The Delhi court has hinted at a favorable judgment, saying that it is time to “shed our inhibitions,” but the Indian supreme court could overturn any ruling.

Nonetheless, Arora, 47, and Khanna, 36—and many members of India’s LGBTQ community—remain optimistic. At minimum, they say, the case has brought the topic into the open in a country where LGBTQ issues are still largely considered taboo.

‘Doing this for my younger self’

It was work that brought Arora, a psychiatrist, and Khanna, a psychologist, together. Since 2006, they worked together at a mental health service co-founded by Arora that focuses on treating children and adolescents. In 2012, Khanna walked into Arora’s office with a cup of tea to talk about her New Year’s resolution to improve their working relationship. In the months that followed, they grew romantic, and they eventually moved in together, brought together their families and found support among friends and colleagues.

At first, their lack of legal status didn’t bother them as much. By the time the supreme court struck down the colonial-era law that outlawed same-sex relations, they were already in a long-term and secure relationship. “It never felt criminal to us,” Arora says.

But the ruling had a profound effect on the young LGBTQ patients Arora and Khanna see in their practice. They started getting more questions about gender and sexuality and saw greater self-acceptance and confidence, especially in people from smaller towns. “The verdict helped young people embrace their identity in all its complexity,” Khanna says.

However, the couple’s lack of legal recognition made many of the aspects of normalizing their relationship increasingly difficult in bureaucracy-laden India. It started with the refusal by banks to let them open a joint account. Then, the couple had a hard time establishing a permanent address for Khanna after she moved in with Arora. Every official they approached questioned their relationship, asking if they were sisters, mother-daughter or landlord-tenant. “There is no vocabulary for couples like us,” Khanna says.

The COVID-19 pandemic helped convince them it was time to stand up for their rights. They realized they would not be allowed to make medical decisions on behalf of each other, should one fall seriously ill. As they considered filing a legal petition to allow them to get married, they questioned whether it would be worth putting their lives under the public and media scrutiny that they knew would come.

It was again their profession that brought them together. Working with struggling young people resonated with their own childhood experiences of not having safe spaces or role models. “When I was 18, I wish I had an ordinary couple to relate to,” Arora says. “In many ways, I am doing this for my younger self.”

Khanna, nodding in agreement, adds: “We did zoom-out [to] think about what this petition will mean for every young person we work with. That really was a turning point for us in this.”

Is India ready for same-sex marriage?

Members and supporters of the LGBTQ community in Mumbai celebrate the Indian supreme court decision to strike down a colonial-era ban on same-sex relations on Sep. 6, 2018.
Indranil Mukherjee/ AFP via Getty Images

Same-sex relations and gender fluidity feature prominently in ancient Indian texts and sculptures. The law that criminalized “carnal intercourse against the order of nature” was put into place by British colonial rulers in 1861. Even after the supreme court struck it down in 2018, many LGBTQ Indians find it difficult to come out and find acceptance in their traditional families.

Violence, especially against individuals who identify as transgender, is rampant. Many LGBTQ people endure discrimination and threats to their safety by family members and landlords, forcing them to flee their homes.

Read more: Column: Homophobia Is Not an Asian Value

It’s for this reason that some activists believe India might not be ready for same-sex marriage—at least until gender and sexual orientation discrimination are outlawed. “There are host of other battles to be fought and won,” says Sukhdeep Singh, an activist and founder of Gaylaxy, a LGBTQ magazine.

In a 2019 survey, 62% of the respondents said that they didn’t approve of same-sex marriages. But waiting for societal acceptance might delay marriage equality, and the right to adopt children, by years. “The society is not going to rush to embrace gay marriage but that’s not what we are necessarily looking for,” says Saurabh Kirpal, a lawyer who helped challenged the law criminalizing same-sex relations. “Even a grudging tolerance to the idea would suffice.”

If Arora and Khanna and the other petitioners win their case in the Delhi court, it will be applicable across all Indian states—since it pertains to a matter of the constitution— unless a court in another state overrules it. However, the court’s verdict will not necessarily be final.

In 2009, the same Delhi court decriminalized same-sex relationships, only for that ruling to be overturned by the supreme court in 2013 based on several counter-petitions. It took another five years for the LGBTQ community to win that legal battle.

Modi’s ruling Bharatiya Janata Party (BJP) has largely been silent on the issue, though the government’s Solicitor General said that “our values do not recognize marriage, which is a sacrament, between same-sex couples.” The Rashtriya Swayamsevak Sangh (RSS), the BJP’s Hindu-nationalist parent organization has said that while it is not in favor of same-sex marriage now, it could be discussed in the future.

Read more: Why India’s Most Populous State Passed a Law Inspired by an Anti-Muslim Conspiracy Theory

But the couple is not deterred by what could be a long-drawn fight, given India’s notoriously slow judicial system. “Social change takes eons to happen. So what?” Khanna says. “This is not just about us.”

They feel empowered by the conversations that are being generated by their petitions and the courage that it has given to people—including a 42-year-old man who came out to his family after watching an interview they did with a national news program.

“We are not seeing this as an event but as a movement,” says Arora. “And movements can’t be quantified by time.”

The original version of this story misstated a quote from India’s solicitor general. He said “our values do not recognize marriage, which is a sacrament, between same-sex couples,” not “our values don’t recognize same-sex marriages.” 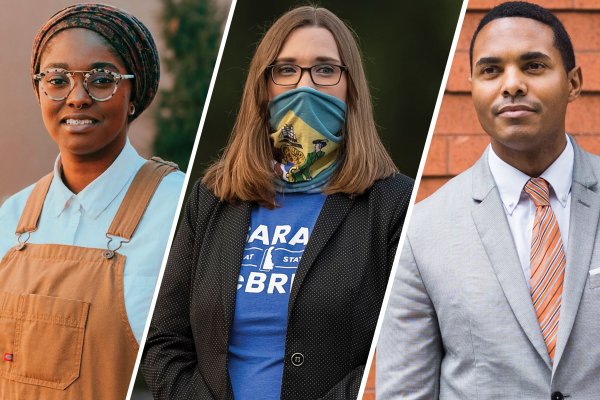 What LGBTQ Lawmakers Want to See From Biden
Next Up: Editor's Pick