It should have been the week’s big China story. After all, the new tariffs President Donald Trump slapped on $200 billion of Chinese imports marked a drastic escalation of a trade war between the world’s two biggest economies. And Beijing may well have wanted its retaliatory tariffs on $60 billion of U.S. goods to top the news agenda. But in China, there was a more burning topic: Where on earth is Fan Bingbing?

Fan, 37, is China’s best-known actress and the nation’s highest-paid celebrity for four years running, earning a reported $43 million last year. She was featured in TIME’s list of the 100 most influential people in 2017 and has also broken into Hollywood, starring in X-Men: Days of Future Past and Iron Man 3. She was soon to begin filming a spy thriller with Penelope Cruz. But since June, China’s biggest star has not been seen in public.

Some speculate Fan is in hiding, but most agree her disappearance seems tied to leaks on Chinese social media in late May of so-called yin yang contracts under her name. In yin yang, one smaller contract is disclosed for tax purposes and a larger one discreetly paid to the star. According to the leak, Fan declared $1.5 million for work on the sequel to her 2003 movie Cell Phone but actually pocketed $7.5 million.

A spokesperson for Fan denied tax evasion to Chinese media in May. But the leak prompted Beijing to launch a broad probe into the entertainment industry’s tax practices, promising to tackle violations. Chinese authorities have since said that no actor is allowed to earn more than 70% of the total salary for the entire cast or more than 40% of production costs.

On Sept. 6, a state news outlet reported that Fan had “been brought under control” and was “about to receive legal judgment.” But the article was quickly erased. The government has refused to comment on her whereabouts. It’s unclear if she has been charged with a crime.

The mystery highlights the opacity of Chinese justice. The use of so-called black jails has been ramped up across China since President Xi Jinping came into power in 2013. In August, a U.N. human rights panel said it had received credible reports that 1 million members of the mostly Muslim ethnic Uighur minority are being held in secret camps for “re-education.” Meanwhile, national and local security officials now have the authority to detain suspects at undisclosed locations for up to six months. Rather than detention and arrest, China is making systematic use of disappearances, says Peter Dahlin, a Swedish human-rights lawyer interrogated for 23 days at a black jail in Beijing in 2016. “The world has never known the numbers of disappearances that we see today in China.”

Black jails are not typically discussed by China’s tightly controlled media, but the disappearance of Fan—who has more than 62 million followers on social media site Weibo—has brought national attention to the topic.

Many presume Fan is guilty of some crime. Aware that rampant graft threatened the legitimacy of the Communist Party, then-party chairman Xi launched an anticorruption campaign in 2012 to target both “tigers and flies,” or high and low officials. China’s anticorruption watchdog says 1.34 million officials have been punished as of October 2017.

Others detect a moral element in the mystery. While the Chinese Communist Party has backed the rapid development of domestic media, it is now clamping down on flourishing popular culture and behavior not aligned with the party’s ideology and socialist values. Fan was a frequent target of criticism, scoring 0% in a recent state-backed social-responsibility ranking of celebrities.

It’s unclear if Fan was caught in Beijing’s morality dragnet, but resurgent puritanism is certainly causing trouble across the entertainment industry. Tech giant Tencent, maker of China’s ubiquitous WeChat messaging app, has plummeted $150 billion in value since January after the government stopped approving new gaming apps. Other film, TV and online-content producers have also been left confused as projects get blocked.

Obscure rules about morality combined with a new tax code—nixing longstanding exemptions and incentives, and backdated to January—has left the movie industry “very angry,” says Wang Donghui, a producer in China since 2010. “There’s a lot of smoke. People don’t understand what the Film Bureau or tax departments really mean.”

Bankrolling movie productions has also become a way for China’s superrich to get their money out of the country: paying foreign talent more on paper than in reality and depositing the difference in a overseas bank. Industry insiders say big-budget flops keep getting greenlighted because their true purpose is simply moving cash overseas. Indeed, capital flight is a growing threat to the economy; China’s foreign-exchange reserves’ dropped $36.6 billion from January to April.

Whatever the true cause of her disappearance, Fan appears the highest-profile victim of Beijing’s attempt to purify what it sees as a runaway, corrupt industry. “Women today are very powerful,” Fan says in one of her last known appearances, an advert for De Beers’ diamonds. “They take control of their work and careers.” But in today’s China, true control belongs to the state alone. 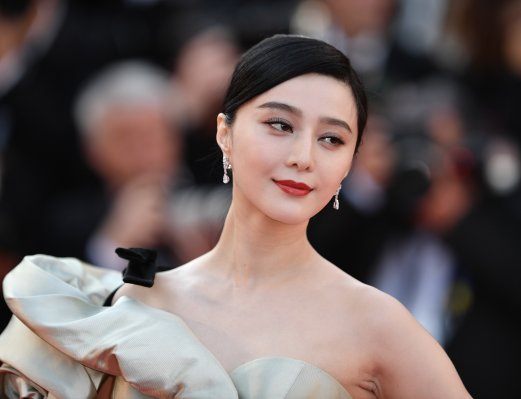 What to Know About the Disappearance of Fan Bingbing
Next Up: Editor's Pick