Why the COVID-19 Pandemic Has Caused a Widespread Existential Crisis

“The ‘ol quarantine move-in,” a friend joked a couple months ago, when I told her I’d decided to live with my boyfriend of almost two years.

I can add all the caveats I want—my lease was up and we probably would have moved in together this year anyway—but I know I’m a statistic. I’m just one of the countless people who have made huge life decisions during this massively chaotic and unsettling pandemic year.

Of course, there is significant privilege in having the time and ability to choose to make a life shift right now, when many people are facing changes they most certainly did not ask for: losses of jobs, savings, homes, friends, family, security. But among those lucky enough to make them voluntarily, life adjustments are coming fast and frequently.

My Instagram feed feels like a constant stream of engagements, pandemic weddings, moving trucks, career announcements and newly adopted pets. Three of my closest friends decamped from major cities to houses in the suburbs in 2020; one bought a house, got married and decided to change careers over the course of about six months.

I’m in my late twenties, so to some degree this comes with the territory. But something about the COVID-19 pandemic, about the unending strangeness of the year 2020, seems to have paved the way for even more change than usual. It’s hard to plan two weeks in the future—who knows what will be open, what we’ll feel safe doing—but, with our previous lifestyles already uprooted, it feels easier than ever to plant new ones. My friends and I joke that when we catch up from our respective quarantines, there is either nothing new, or everything.

We’re not alone. The U.S. population seems to be making changes to the way it lives, works and relates en masse.

A Pew Research Center poll found that, as of June, 22% of American adults had either moved because of the pandemic or knew someone who did. That trend apparently continued into the fall: About 20% more houses sold in November 2020 compared to November 2019, according to U.S. Census Bureau data. The reasons for that trend are likely many. Among them, months of indoor time seems to have prompted many people to look for homes that offer more space, and those who can work from home suddenly have more freedom to move beyond the commuting distance of an office.

Meanwhile, about a quarter of U.S. adults said they’re considering a career shift due to the pandemic, found a November report from HR company Morneau Shepell. That’s not surprising, given that traditional workplaces have been partially replaced (at least for now) by teleworking and many people who cannot work from home must grapple with an entirely new risk-benefit analysis associated with clocking in. The numerous Americans who lost jobs in 2020 also have no choice but to reconsider their employment.

In the world of relationships, jewelers are reporting double-digit increases in engagement ring sales, the Washington Post reported in December. In the 2020 installment of Match’s annual Singles in America report, more than half of respondents said they’re prioritizing dating and rethinking the qualities they search for in a partner, likely sparked by the complete social upheaval of this year.

It will take years for researchers to fully understand the effect coronavirus had on the U.S. population, and it’s unlikely there will be one single lifestyle shift that characterizes the pandemic. Right now, the dominant trend seems to be change itself. The COVID-19 pandemic appears to have spurred a collective reckoning with our values, lifestyles and goals—a national existential crisis of sorts.

Freelance journalist and author Nneka Okona has lived in Atlanta for almost five years, but it often didn’t feel that way. Okona, 34, traveled a total of about 100,000 miles in 2019, so she was rarely home. Even when she vowed to take a month or two off from traveling, she’d get antsy and book a last-minute getaway. To say pandemic lockdowns and social distancing changed her lifestyle would be a massive understatement.

“It was such a drastic change. I realized maybe a couple months into the pandemic that I actually was not doing well, mental-health-wise,” Okona says. She started seeing a therapist, who helped her realize she was suffering depression after slamming the brakes on her action-oriented life.

Almost a year into the pandemic, Okona says she’s doing much better mentally and reflecting on her life in ways that weren’t possible when she was constantly on the go. “With the movement I was just so distracted,” she says. “It was easier to ignore a lot of things I needed to focus on because I didn’t have time.” Now, she says, she’s thinking critically about where she wants to live, whether she wants to continue freelancing and in what form she’ll continue her travel habit moving forward.

Reevaluation is a common reaction to sudden, strange stillness like that brought on by the pandemic, says Dr. Elinore McCance-Katz, who leads the U.S. Substance Abuse and Mental Health Services Administration. “It gives people a lot of time to review their lives and think about what life could look like moving forward,” she says. “For many people, that’s not a bad thing, for them to really spend time taking an inventory of what their life is like currently and what they want it to be like.”

Quarantine also creates a perfect storm for making big decisions, says Jacqueline Gollan, a psychiatry professor at Northwestern University’s Feinberg School of Medicine who studies decision making. Many people are stuck at home for most of their waking hours, watching one day bleed into the next. When it feels like nothing noteworthy is going on, people may try to make things happen.

“People have a basic bias toward action,” Gollan says. “People will want to take action on something, whatever it is, rather than delay action [even] when that’s the best option.”

That natural inclination may be ratcheted up even further when people are trying to relieve negative emotions associated with the pandemic, Gollan says. In addition to a general preference for action over inaction, humans are also likely to seek out situations—new relationships, living situations, jobs—that seem like they’ll relieve stress, sadness or other bad feelings. That’s particularly likely during something as emotionally taxing as a pandemic.

Coronavirus has also reminded people of their own mortality, Gollan says. “People are realizing that life is short, and they’re reprioritizing,” she says. That’s an expected reaction: Studies show that natural disasters and other traumatic events can prompt people to make big decisions like getting married, often in a search for security or comfort.

Crises can also make people analyze and change their values. People tend to become more religious after natural disasters, research shows, perhaps out of a desire to understand or cope with difficult and inexplicable situations. Similarly, a Pew Research Center report from October 2020 found that 86% of U.S. adults thought there were lesson(s) humankind should learn from the COVID-19 pandemic. When asked to specify what those lessons were, people gave Pew more than 3,700 answers—some practical (the importance of wearing a mask), some spiritual (“We need to pray more and pray harder”) and some personal (we should “value humankind and intimacy”).

Relationships are often the first thing to get a makeover when people take a hard look at their lives, says Amanda Gesselman, associate director for research at the Kinsey Institute, a research center that focuses on sex and relationships. Gesselman’s research shows many people, particularly those in their twenties and thirties, are spending more time than usual on dating apps during the pandemic, and report having deeper conversations with the people they meet there, compared to before the pandemic.

“A big trend right now is really focusing on what kind of connections you want,” she says.

It’s not all warm and fuzzy, though. Rachel Dack, a Maryland-based psychotherapist and relationship coach, says she is indeed seeing many clients think critically about what they want in a relationship—and that leads to breakups and divorces as well as engagements and cohabitations.

In Match’s recent survey, about a quarter of singles said stay-at-home orders caused them to end a relationship. Some preliminary data also suggest more couples than normal are divorcing this year, though not all researchers agree with that assessment. For every relationship moving forward, Dack says, another seems to be splintering—perhaps not surprising, given pressures like financial stress or the tension of forced 24/7 togetherness. Researchers have observed that phenomenon in the aftermath of other crises; stressful times can both end and promote relationships.

Mass traumas can force change in other unpleasant ways, too. Both the 1918 flu pandemic and the 2008 recession led to noticeable decreases in the U.S. birth rate. National or global crises can also cause or compound mental health and substance abuse issues at the population level, as the COVID-19 pandemic has already done.

Research shows that rates of depression and anxiety have skyrocketed during the pandemic, which is one reason Gollan says it’s wise to think carefully about making any serious choices right now. “We’re notoriously not very good at predicting the consequences of a future decision,” Gollan says, and we’re also prone to “optimism bias”—the tendency to believe our decisions will work out in the end and that the future will be largely positive. That’s not always the case, though. Decisions can and do backfire, especially when they’re made under duress.

That’s not to say all change is bad. For many people, the pandemic has kickstarted a genuinely valuable process of reevaluation—it’s been a disruption so jarring it forces introspection. The luxury of extra free time, for those who have it, can also make it easier to define and act upon values and priorities.

The trick, Gollan says, is leaning into the natural inclination for change without toppling over the edge. Don’t act just because you think you should, and resist the urge to make life-altering changes based solely on temporary factors, she says. (The pandemic will end, though it might not feel like it.) “Stress test” your planned decision by seeking out information or perspectives that challenge it, Gollan suggests—before it’s too late to undo.

As we spoke, I wondered whether Gollan would approve of my decision to move in with my boyfriend. I haven’t had any regrets so far, but maybe I’ve been blinded by optimism and a desire for comfort amidst all the difficulty of this year. Did I stress test the plan enough? Should we have waited until the pandemic ended and our heads cleared?

I’m not sure what an expert would say. But if 2020 has taught me anything, it’s that I cannot begin to predict what the future—or even tomorrow—will bring. I’m happy where I am, and that feels like more than enough as a historically awful year comes to a close. Maybe it’s the optimism bias at work. But optimism, psychologically biased or not, feels like a worthy antidote to a year marked by tragedy and sadness and stress. I’m going to hang onto it where I can. 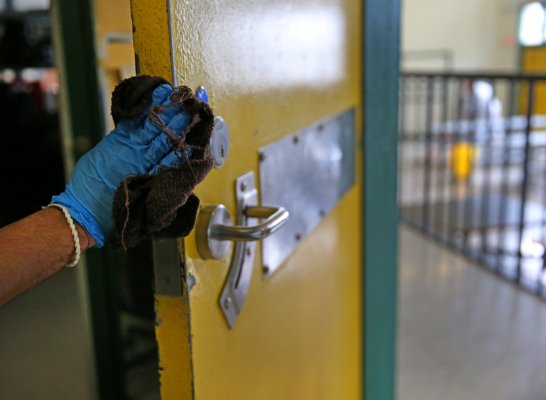 COVID-19 Has Devastated U.S. Prison Populations
Next Up: Editor's Pick