If We’re Serious About Saving the U.S. Economy, We Need to Bail Out the Cities

Boarded-up shops along 5th Avenue in the Gaslamp Quarter before an imposed curfew on November 21, 2020 in San Diego, California.
Photo by Sandy Huffaker/Getty Images
Ideas
By Zachary Karabell
Karabell is an author, investor, and commentator. His latest book is Inside Money: Brown Brothers Harriman and the American Way of Power.

As the United States heads into its grim pandemic winter, Congress remains deadlocked on passing a new stimulus bill. The main sticking point is what Senate Majority leader Mitch McConnell dismissed as “controversial state bailouts.” Controversial they may be, but they are also vital and imperative to the economic recovery of the entire country.

Republicans in Congress are telling themselves that we can have an a la carte approach to pandemic relief—we can’t. There will be no robust American economy if half the country prospers and half founders. A house divided wasn’t tenable on the eve of the Civil War and it isn’t tenable in the middle of the gravest health emergency in a century. And refusing to provide aid in a time of great duress breaks with an honorable legacy of the entire country coming together to help each other after natural disasters. Few blinked in protest – and few should have – when tens of billions of dollars were spent to help New Orleans after Hurricane Katrina, even though many people suffered not at all from that. Tens of millions are being harmed by the economic fallout from the pandemic.

It would appear that there is a broad consensus that something needs to be done, but all efforts are stalling in the Senate. But in spite of a plan endorsed by a bipartisan group and by the White House for about $900 billion in aid including $160 billion for state and local governments, many Democrats are refusing to accede to Republicans demands that companies be shielded from liability over COVID-19 risks, and Senate Republicans are adamant that federal spending not be used to rescue ailing state and local governments.

The objection to state and local aid, repeated ad nauseum, is that it will supposedly reward badly run governments that in a time of crisis are now paying the price for their chronic mismanagement, high taxes and mediocre services. It should come as no surprise that almost all of those states and municipalities that Republicans point to – states such as Illinois, Michigan and New Jersey, and cities such as New York, Chicago, Atlanta, Philadelphia, San Francisco – are Democratic strongholds. That, at least, explains the partisan animus.

But even if it makes sense on partisan grounds, the refusal to see the larger economic picture is a sad case of the old cliché of cutting off one’s nose to spite the face. Red and blue define the political landscape, but cities and urban areas are the locomotive of the American economy, as they are of every vibrant economy on the planet. Cities in the United States account for more than 85% of U.S. GDP. And even that doesn’t tell the full story: the top 25 metropolitan areas of the United States generate half of the entire economic output of the United States – more than $11 trillion dollars. The New York City metropolitan area (which includes parts of New Jersey and Connecticut) alone is 9% of US GDP; if it were a stand-alone country, its economy of c. $1.5 trillion would be tad smaller than Canada in nominal terms. Los Angeles is just over 5% of US output, about the size of Mexico not adjusted for purchasing power.

By way of comparison, Kentucky, the home state of Senator McConnell, generates around $220 billion of GDP the agricultural powerhouse of Kansas is $170 billion. The states of Florida and Texas are considerably more – but the GDP for the entire state of Florida is about the same as Los Angeles, while all of Texas is about the same as New York City.

The idea that the major urban areas of the country can somehow sink without bringing the entire national economy down is, therefore, factually absurd, and the idea that the entire country can thrive if so much of the country does not is equally tendentious. If, for instance, one is concerned about the competitive economic challenge of China in the years ahead, then disinvesting in the largest portion of the United States economy because of partisan politics is, to say the least, counterproductive.

It is cities, far more than states, that need the bailouts most of all. It is cities that have born the brunt of COVID-19 and restrictions, even though rural areas such as North and South Dakota have in the past few months been seeing their own levels of COVID-19 devastation. It is cities that are most vulnerable to the restrictions put in place to contain the pandemic, because their strengths are in a time of pandemic deadly weaknesses: densely packed, highly social, hubs of businesses and entertainment with people crammed together. Density and diversity, such powerful motors of human creativity and innovation in “normal” times, are an Achilles heel now.

States need emergency funds primarily, though not solely, because of the plummeting tax base and high unemployment of the cities that power them. That is particularly true of cities in states that have income tax, which are almost all controlled by Democrats. Those taxes, in turn, fund pension systems for public employees such as teachers and, yes, the police. Refusing, as the Republicans are, to spend money on aid to states and cities harmed by the pandemic is the ultimate act of defunding the police—and will have a far more dramatic impact than protests have yet had.

It’s not only Democrat cities and states: Las Vegas, which is the ultimate hub of entertainment and business travel, has been decimated; so has greater Phoenix, and to a lesser degree Miami. None of those cities, however, voted Republican, and nor for that matter did Louisville in ruby-red Kentucky, a city that comprises one-third of Kentucky’s economy.

There’s a final reason to fund these needs: it’s the right thing to do in an emergency. Even if you accept the premise that many of these states and cities had badly mismanaged their balance sheets and are rife with waste and corruption, tsk-tsking them in a moment of need is like telling the obese patient who shows up with COVID-19 that they should just suck it up because they didn’t take better care of themselves before the disease hit.

And it’s also a sad break from how we – and “we” means “we Americans” – have behaved historically when natural disasters afflict parts of the country and leave other parts unscathed. So when Hurricane Katrina devastated the Gulf Coast and New Orleans in 2004, Congress authorized tens of billions in aid. It didn’t matter whether New Orleans and the state of Louisiana had failed to adequately maintain the levees or that New Orleans had always been a city with a troubled city government. It mattered that they were overwhelmed by a disaster and were in need. The same was true for Hurricane Sandy and the Northeast, and for Hurricane Harvey in Texas and the Gulf. It was the right thing to do morally, and pragmatically, because of the gut understanding that we thrive most when we thrive together.

Now is no different. If anything, the needs are national and more acute than at any point in living memory. That this aid if even subject to debate does not speak well of the political system, but even more, it does not speak well of the vitality of our collective. That may not be surprising given the recent election, but surprising or not, this house divided is being put to an unnecessary test that has an easy solution: spend the money, and spend it now. 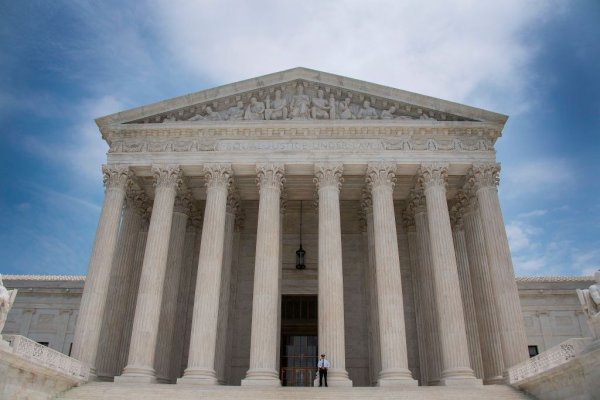 How the Conservative Legal Movement Stopped Trump
Next Up: Editor's Pick