If We Don't Move Fast, the Economy Is Going to Get Much Worse

A waitress wearing a mask and gloves disinfects a table in a Restaurant on May 5, 2020 in Stillwater, Oklahoma.
Johannes Eisele—AFP/Getty Images
Ideas
By Zachary Karabell
Karabell is an author, investor, and commentator. His latest book is Inside Money: Brown Brothers Harriman and the American Way of Power.

It now appears likely that Joe Biden will be the next president of the United States, but the frenzy of Election Day and the subsequent uncertainty has obscured an urgent economic reality: the failure of Democrats in the House, Republicans in the Senate and President Donald Trump to agree on a new stimulus package over the past months has jeopardized the tenuous recovery from the COVID-19 pandemic. The results of the election change nothing on that score. Regardless of the electoral outcome, doing nothing until February 2021 after a new Congress and President are sworn in could well plunge the country back toward the depths of March when a major depression seemed upon us. Lame duck governments aren’t known for doing much except preparing to leave. We need this one to take real action.

Don’t be fooled by promising economic numbers, America is still in deep trouble. The jobs report just released shows the unemployment rate at 6.9%, but the pace of job growth has slowed precipitously and more people have given up entirely and departed the labor force. And average rates over the past months are higher than at most points in the past 70 years, except for brief periods in 1982-1983 and during the worst months of the financial crisis. Second quarter GDP contracted 31 percent, and even though third quarter GDP leapt 33 percent that still leaves the overall economy for 2020 down nearly 4%. Income is not only down for most workers but tens of millions no longer have the benefit of enhanced unemployment payments since Congress’ failure to renew the emergency support they passed in April; small businesses have spent the hundreds of billions in PPP loans that also have not been renewed; and a new wave of lockdowns in Europe and surging cases of COVID-19 in the United States are a fair indication that the economic gains made since the spring will not be sustainable.

Now, with the election over, the campaign spin doesn’t matter, only the hard facts. There is clear evidence in the past month that economic activity has recovered about as much as it can until the virus is no longer a persistent threat. Employment gains have essentially stalled. Hotels, airlines, live spectator events, full offices and office towers and the vast small-business ecosystem that supports those will not be viable until the virus is no longer shaping who can go where and when. It doesn’t matter how resilient Americans are, or whether state governments are more focused on starting the economy or containing the virus. Those jobs aren’t coming back until those activities can.

To understand what happens when we wait too long because of political instability, we do have one recent test case: the Great Recession of 2008-2009. While the outgoing Bush administration did manage to work with Congress on a $700 billion bank bailout bill in October, that quickly proved insufficient to staunch the widespread collapse and none of the funds went to Main Street. By the time Obama won the November election, the country was hemorrhaging jobs, with 1 million newly unemployed in November and December. The Obama transition team scurried to figure out just how bad things were, given incomplete data and the rapid freezing of the credit and banking systems starving businesses and home-owners of needed cash. They soon realized that the situation was even more dire than expected. That led to the nearly $800 billion stimulus bill that was only passed in February 2009.

What’s striking in retrospect is that both of those bills together amounted to less than what Congress and the Fed allocated in April and May of 2020. What’s also striking is that the spending in 2008-2009 was still too little and too late, with the exception of keeping the banking system from complete insolvency – no small feat, but not enough to staunch the devastation for Main Street and millions of home-owners, devastation that took years to recover from.

The time to act with massive spending would have been before the damage accelerated and metastasized to every sector of the economy. Obama’s economic team, it was later revealed, knew that at the time, and pushed for a package well in excess of $1 trillion, but that was reduced because no one believed that Congress would accept such a high number. It proved difficult even to pass the lower figure, and as it turned out, both numbers were too little. Unemployment soared to 10 percent, and that understates the damage given how many people simply dropped out of the labor force. Economic growth sputtered for years, as did home prices and wages.

That experience should serve as a lesson, a warning and a harbinger. Economically and politically, waiting too long and then not doing enough can be almost as bad as doing nothing. The long-term consequences could actually be worse than doing nothing, as the half-baked approach then boomerangs politically on those who advocated it. Right now, the economic system is perched at the apex of a fulcrum, and it will take little to begin to fall and then accelerate down. That will demand even more spending, and that spending will take even longer to be of use. The further you fall, the higher you have to climb back.

And that is the unique, pressing challenge of the moment. No lame duck Congress and lame duck president have ever been called on to undertake such a large and complicated spending bill, but that’s what the moment demands. Senate Majority Leader Mitch McConnell signaled after the election that he is open to a new stimulus bill, but not whether he is open to one as large as the $2 trillion that was being bandied about over the past months. That is a hopeful sign, but hard work needs to be done by him, by Democrats in Congress and by the president to craft a package that is sufficient. Waiting till February is too late – too late for the airlines that cannot function at current capacity; too late for municipal transit systems with barely a quarter of the riders and hence a quarter of the revenue; too late for a hospitality industry deeply hobbled; too late for small businesses that have used up their loans; and too late for a system that has reached the limits of its recovery as COVID-19 case once again skyrocket. 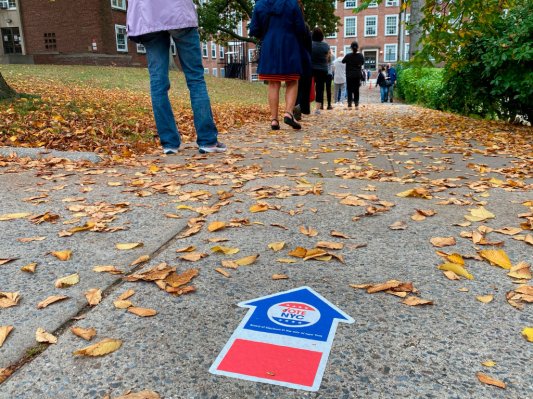 The History Behind 2020's Record Voter Turnout Numbers
Next Up: Editor's Pick