2020 Marks the Point When Human-Made Materials Outweigh All the Living Things on Earth, a New Study Finds

In a startling sign of the impact that humans are having on our planet, a study published Dec. 9 estimates that 2020 marks the point when human-made materials outweigh the total mass of Earth’s living biomass.

Scientists at Israel’s Weizmann Institute of Science found that the total mass of human-made materials—such as concrete, steel and asphalt—has increased rapidly since 1900, when it made up the equivalent of just 3% of the mass of living biomass—plants, animals and microorganisms. As humans have constructed more buildings, roads, structures and objects over the last 120 years, the mass of human-produced materials has grown from less than 0.1 teratonnes to roughly 1 teratonne (1 trillion tonnes), the study, published in the journal Nature estimates.

Meanwhile, humans have been steadily reducing the amount of plant biomass on Earth through thousands of years of land-use, like cutting down trees to plant fields and raise livestock. Today, according to the study, all the living plants on Earth weigh roughly 1 teratonne, half of what they did when the agricultural revolution began 12,000 years ago. Plants account for 90% of the Earth’s living biomass, per the study.

To produce their estimates, scientists at Israel’s Weizmann Institute of Science integrated a vast number of existing datasets. For the biomass side of the calculation they used data from a 2018 study, in which some of the same researchers collated data to find the mass of all living things on Earth and how it was distributed. That study found that humans themselves make up less than 0.01% of the world’s living biomass. To estimate the weight of human-made materials, they relied largely on the work of Vienna’s Institute of Social Ecology and University of Natural Resources and Life Sciences which for years have been collating data from national statistics bureaus, industry groups and other research in the field of material-flow analysis.

Ron Milo, one of the authors of the recent study, tells TIME that, though there is a large margin for error in the data given its “gigantic” scale, his team can say with 95% confidence that the “tipping point” where human-made materials outweigh living biomass takes place in the six years before or after 2020, with this year as the most likely date.

There is no sign that humans are slowing the expansion of our footprint on the planet, the study says. The rate at which new human-made materials are created began to speed up in the 1950’s, as a post-war construction boom took hold. Production has accelerated ever since, with the mass of human-made materials on earth doubling every 20 years for the last century.

For the last five years, humans have produced on average 30 gigatonnes (30 billion tonnes) of material every year. Another way to look at it: every week, we produce more than the equivalent of the body weight of every person in the world. If current trends continue, human-produced materials will weigh triple the total mass of living biomass by 2040, according to the study.

Milo says these findings are further evidence that we are living through a new geological era in which human activity is the dominant force shaping Earth’s climate and environment, which scientists have dubbed the Anthropocene. “Some people think that humanity is just one species out of many, and that we’re tiny and the world is huge. But our impact is not tiny,” Milo says. “Having a number really quantifies that.”

He hopes that the study—published at a time when governments, businesses and communities around the world are re-evaluating their contribution to environmental problems—will be a wake-up call. “It’s not that we should stop making things, but we need to be aware of the impact we are having and think about how we’re consuming natural resources. Our decisions, our policymaking could affect the rate at which human made materials become double or triple the mass of living things.” 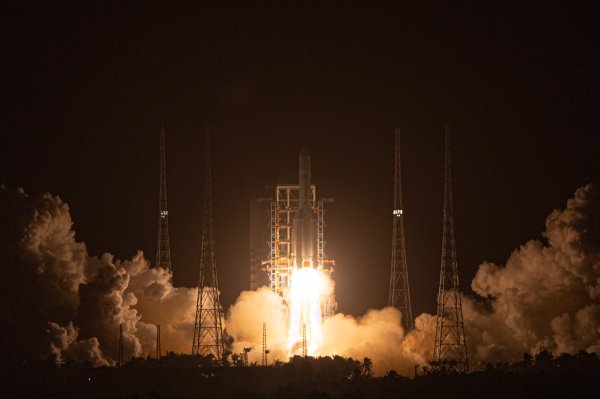