Asia Has Beaten Back Each Wave of COVID-19. But This Surge Could Be Different

Dooseong Kang wants to be clear: He isn’t complaining about the new COVID-19 restrictions at his Seoul diner. The new rules mean he has to close early and cut the number of available seats in Cafe Travel Maker by half. He knows the restrictions are important to get control of the current surge in coronavirus infections and he supports the government’s efforts. But he’s tired of it.

“People … are having a lot of inconveniences in life right now,” says Kang, whose restaurant business is already down 50% this year. “I’m just saying there is a cost to the success.”

COVID-19 cases are spiking across Asia once again. In South Korea, it’s the third peak in infections—the highest since the beginning of March. Hong Kong is experiencing its fourth COVID-19 wave. Japan, Indonesia and Malaysia all hit daily records at the end of November.

Each time the pandemic has surged in the region, governments and people have responded—restricting social gatherings, plugging holes in the epidemiological net and working to track and isolate as many cases as possible. And each time, transmissions have fallen within a matter of weeks—allowing daily life to return to a semblance of normalcy. That’s kept most of the region as the gold-standard for fighting COVID-19, with infection and death rates a fraction of those in Europe and the United States.

Read more: What Asian and Pacific Countries Can Teach the World About How to—and How Not to—Reopen Our Economies

But this surge could be different, experts warn. Cooler, drier weather is making it easier for the coronavirus to spread; government officials are reluctant to further damage businesses that have taken a beating in the pandemic; and creeping COVID-19 fatigue is setting in among a public that has, until now, been remarkably responsive to yo-yoing restrictions. These factors are combining to make transmission of the virus harder to bring under control.

“People are sick of lockdown and COVID things. Also, some are sort of underestimating the risk this time,” says Dr. Kenji Shibuya, the director of the Institute of Population Health at King’s College London.

Shibuya says he is less optimistic that countries will be able to quickly control the coronavirus surges this time around—especially his native Japan, which has been slow to implement restrictions.

Of the Asian countries where COVID-19 is currently surging, Japan is the most troubling to many infectious disease experts. The world’s third-biggest economy had been praised internationally for keeping cases low with relatively few disruptions, but cases began to spike at the beginning of November. By the end of the month, new cases broke multiple daily records—peaking at nearly 2,700 on Nov. 28.

The figure is still small for a nation of 126 million, but a government health panel warned last week that if cases rose much more, hospitals risked being overwhelmed in several areas of Japan, including parts of the second largest island Hokkaido and Tokyo. Japan has the oldest population in the world—with 28% of people over age 65.

The surge came as a result of government programs that encouraged domestic travel and eating out in an effort to boost the economy, Shibuya says. These programs began in July, despite COVID-19 continuing to spread in parts of the country, particularly the capital.

Read more: This Japanese Island Lifted Its Coronavirus Lockdown Too Soon and Became a Warning to the World

Officials have sounded the alarm over the surge, with new Prime Minister Yoshihide Suga urging social distancing, mask-wearing and hand-washing. “The next three weeks are a crucial period,” he told reporters last week.

But they have yet to stop the Go To Travel program, which subsidizes travel throughout Japan. The scheme was backed by Suga even before he ascended to the top job as a way to prop up the country’s devastated airline, hotel and restaurant industries. This week, the government announced it was extending Go To Travel through June 2021.

A statue in front of a restaurant wears a protective mask in the Shinsekai shopping district of Osaka, Japan, on Sunday, Nov. 29, 2020.
Soichiro Koriyama/Bloomberg via Getty Images

Tired of the COVID-19 two-step

Shibuya says the mixed-messaging from the Japanese government has resulted in either confusion or complacency from many people. That’s especially bad news in Japan, where the population’s adherence to early social distancing and hygiene guidelines played a major part in keeping COVID-19 transmissions low.

When the Tokyo government asked restaurants and karaoke bars to close by 10 p.m. to reduce the spread of the coronavirus, many businesses said they would comply. But some owners have balked at the request because they don’t want to miss revenue from year-end parties.

It’s not just Japan. In Hong Kong, the South China Morning Post reports that the government plans to increase the fines for not complying with social distancing rules five-fold to 10,000 Hong Kong dollars ($1,300) in an effort to enforce new restrictions on gatherings.

After a spike in July and August, COVID-19 cases dropped to levels low enough that the semi-autonomous Chinese city negotiated a first-of-its-kind travel bubble with Singapore—which had also quashed its COVID-19 outbreak. Both places have barred entry to nearly all non-residents during the pandemic and require incoming travelers to quarantine for two weeks on arrival. The travel bubble promised a return to safe, quarantine-free travel between the two business hubs. Residents of both cities eagerly snatched up tickets for the first flights.

But it was not to be. On Nov. 21, the day before the travel bubble was set to take effect, officials called a halt to the agreement after new cases spiked in Hong Kong. MacIntyre, the Sydney health security professor, said it was clear the plan was premature—no matter how much the famously globe-trotting residents of both cities wanted it to work.

“The virus doesn’t care what we want and what we wish for,” she says. “It’s going to just take off, the minute you start mixing people together. It will behave predictably anywhere in the world.”

Hong Kong’s current spike is tied to dance halls—where mostly older women paid for dance instruction from younger male dancers. At the beginning of the outbreak, most female COVID-19 patients from the cluster were in their 60s and 70s, while the male patients were in their 30s, the Post reported. The health authorities initially struggled to shut down the venues because they do not need a license to operate. The cluster has since grown to 590 positive COVID-19 tests, and is spreading in many corners of the city.

As a result, the Hong Kong government ordered bars to close, reduced capacity in restaurants and mandated that only two people can sit at a restaurant table. The economic effect of these repeated restrictions has been onerous. Many restaurants and other small businesses have been forced to close and Hong Kong’s unemployment rate hit a 16-year high of 6.4% last month (the record occurred during the 2003 SARS epidemic).

Ben Cowling, an infectious disease epidemiologist at the University of Hong Kong, says most Hong Kong residents appear to be complying with the new restrictions, but he’s seeing signs of COVID-19 fatigue—especially due to the economic strain.

People wearing masks to prevent the spread of COVID-19 walk in front of a banner emphasizing an enhanced social distancing campaign displayed on the wall of Seoul City Hall on November 25, 2020 in Seoul, South Korea. Authorities announced the tightening of social distancing regulations and the closure of some kinds of businesses, including nightclubs, to combat a quickly increase wave of Covid-19 infections this week.
Chung Sung-Jun–Getty Images

The other factor that will make Asia’s current surge harder to beat is the weather. COVID-19 is transmitted more easily in the cooler, drier air of fall and winter. It’s not a problem unique to Asia—the U.S. and Europe are struggling with much larger, deadlier surges.

But health officials are already seeing the impact. In South Korea—where cases have hit their highest level since early March—the Seoul government has enacted restrictions on restaurants, banned most venues from hosting year-end parties, and asked residents to socially distance once again.

Soonman Kwon, a professor of health economics and policy at Seoul National University, says in an email to TIME that tracking data shows Koreans have complied and the movement of people has decreased similar to the previous two COVID-19 waves. But COVID-19 cases have not dropped off at the same rate observed during previous waves.

Read more: South Korea’s Health Minister on How His Country Is Beating Coronavirus Without a Lockdown

Temperatures in Seoul have dipped to 20 °F (-7 °C) and people are staying inside more where there is less ventilation, he says.

Cowling says research has shown COVID-19 is not seasonal in the same way influenza is, but it becomes 10-20% easier to transmit in cold weather—a combination of people gathering inside more, the body’s reaction to drier air and the coronavirus surviving longer on surfaces.

Despite the substantial challenges, Asia’s COVID-19 surge remains a drop in the bucket compared to transmission rates elsewhere in the world.

Cowling points out that the region has been able to bring infection rates under control without resorting to full lock-downs and stay-at-home orders. Those remain an option if the situation becomes more dire.

“I don’t think we’re gonna see Northern Italy or New York scenarios in Asia because there’s still time to stop that from happening, because we know that risk now,” he says.

Kang, the Seoul restaurant owner, estimates that 90% of people he sees are going along with the government’s requests to increase social distancing during the current surge. He says his American-style diner has been doing good business delivering comfort food to people who are staying home, rather than going out—he specializes in pancakes, waffles and French toast.

“People are getting tired,” he says. “But they are just hoping that this really finishes as soon as possible.” 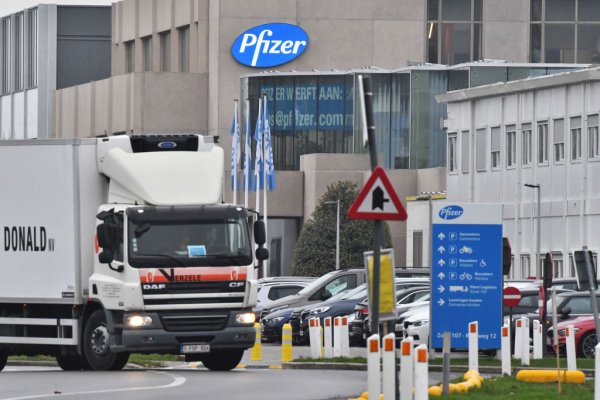 Pfizer Scaled Back COVID-19 Vaccine Production
Next Up: Editor's Pick