The Undoing's Fatal Flaw Was Its Disrespect for Its Audience

The human mind can be its own worst enemy. Prone to myopia, selfishness and confirmation bias, we fall into traps that we should’ve spotted from three states away. We might believe, for instance, that a man credibly accused of murder—one who has already admitted to cheating on his wife and fleeing several hours upstate after finding the victim dead—must be innocent just because he’s played by the charming Hugh Grant. This turned out to be the big revelation of The Undoing, the all-star HBO murder mystery from creator David E. Kelley and director Susanne Bier. Despite middling reviews, the show became a sleeper hit amid our bleak pandemic autumn. But, if the social-media reaction to Sunday’s finale was any indication, then the revelation that the lovable pediatric oncologist who looked pretty guilty from the beginning turned out to be extremely guilty in the end didn’t shock viewers so much as insult them. How gullible did Kelley and Bier think we were, anyway?

Like so many whodunits, The Undoing was littered with red herrings. Didn’t murder victim Elena Alves’ (Matilda De Angelis) husband (Ismael Cruz Córdova) seem weirdly emotional? What was the deal with the obscenely wealthy, fiercely protective father of protagonist Grace (Nicole Kidman), whose framing as a left-field suspect extended to the decision to cast the often-sinister Donald Sutherland in the role? And what did Grace think she was doing when she was caught on camera, strolling around Harlem at such an unlikely hour? The penultimate episode closed with a remarkably absurd cliffhanger: Grace’s discovery of the murder weapon hidden in her preteen son Henry’s (Noah Jupe) violin case. Could he have done this?

Read More: The Director of The Undoing Answers All Our Questions About That Surprisingly Unsurprising Finale

Of course not; Kelley dispatches with the theory about a minute into the finale. The bulk of the episode is spent in the courtroom, where Grant’s Jonathan performs beautifully as a witness in his own defense. Satisfied that an acquittal is within reach, his lawyer (Noma Dumezweni) is ready to close her case when Grace insists on testifying. Who better than his clinical-psychologist wife, with her doctorate from “Harvard… University” (I howled at this line reading) and 17 years’ worth of intimate knowledge of Jonathan, to confirm his fundamental goodness? Except that, in the show’s final not-so-surprising reversal, Grace’s defense of her husband turns out to be a gambit to allow for her cross-examination. Questioned about her recent chat with Jonathan’s estranged mother—a conversation prosecutors couldn’t have known about without an inside source—she is “forced” to discredit her own testimony by divulging what she learned about his narcissistic, possibly sociopathic past.

Hugh Grant in 'The Undoing' finale
Photograph by Niko Tavernise/HBO

With Grace’s betrayal apparent and a conviction imminent, Jonathan flees upstate with an increasingly terrified Henry. This is supposed to be the show’s emotional apex—the moment when viewers must finally set aside our pro-Grant bias and accept his character’s guilt. As the chase scene escalates (thank God Grace’s dad has helicopter money, right?), Bier replays Elena’s murder in a series of lurid flashbacks that seemed designed to devastate us. Yes, that’s Hugh Grant threatening a beautiful young woman. Here he is again, smacking her around. Finally, she flies at him with a hammer. We watch him grab it out of her hands and fatally strike her with it. Bier switches to the dead woman’s perspective as he gently closes her eyes, then beats her head to a bloody pulp. In a tonally dissonant horror-movie touch, the sound of her skull bones cracking is sickeningly loud.

It’s a conclusion that only works, on a psychological level, if you went into the finale convinced—or at least desperately hopeful—against all odds that Jonathan was innocent. (Did I mention The Undoing was adapted from a novel called You Should Have Known?) That isn’t to say you had to be certain; in a story that took so many unbelievable turns, I was open to the possibility that the conclusion would be similarly sloppy. But Kelley’s adaptation and Bier’s direction, of the murder sequence in particular, assume that viewers have an emotional attachment to the prospect of this family emerging from the trial intact. Didn’t we want to see beautiful, fragile Nicole Kidman and charismatic, self-deprecating Hugh Grant keep on living together in their multimillion-dollar Manhattan apartment with their adorable, precocious child, as they awaited the additional windfall of her future inheritance? Didn’t we want to believe that some other, less telegenic character committed this brutal slaughter?

Actually, I did not. And judging by the collective “ugh” that greeted the show’s final chapter, neither did many other viewers. The Undoing simply underestimated its audience. We were sophisticated enough, in the end, to untangle our fondness for certain famous actors from our interpretations of the characters they portray—especially when, despite strong performances by the two leads, those characters are so flimsily, impersonally written. If that wasn’t always the case, then the popularity of shows like Succession and Billions—not to mention the inescapable political narrative of the past several years—should have signaled that the public might not be so convinced of the moral superiority of the rich. A silver-fox cancer doctor with an impeccable bedside manner smashes in his secret mistress’ head? Sure, I’ll believe it. 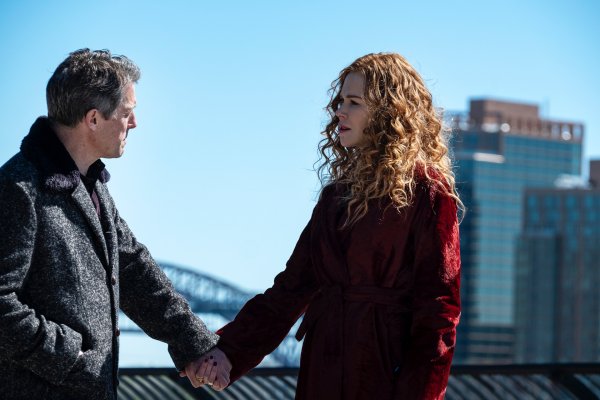 The Director of 'The Undoing' on the Finale
Next Up: Editor's Pick