Moderna is requesting emergency authorization from the Food and Drug Administration (FDA) for its COVID-19 vaccine on Monday, Nov. 30, 2020.
STR/NurPhoto/Getty Images
By Alice Park

Moderna is requesting emergency authorization from the Food and Drug Administration (FDA) for its COVID-19 vaccine on Monday—a development the company’s president tells TIME is an “incredible milestone.”

The filing for the company’s mRNA-based vaccine is the first step toward getting the shot into hospitals, pharmacies and health centers. The Massachusetts-based biotech is the second company, following Pfizer, to request authorization for a COVID-19 vaccine.

Unlike Pfizer’s shot, which is also based on mRNA, Moderna’s vaccine does not need to be stored at ultra cold temperatures in specialized freezers but can remain frozen at -20°C (-4°F), or closer to normal freezer conditions. Once thawed, the doses can be stored in a refrigerator for up to 30 days. That could make Moderna’s vaccine more practical for people in more remote areas where ultra cold storage isn’t available, or where the demand for vaccines isn’t as high, so doses can remain viable for longer periods of time under refrigeration.

Read more: Inside the Company That’s Hot-wiring Vaccine Research in the Race to Combat the Coronavirus

The submission to the FDA, made up of thousands of pages of data, includes both the final analysis of the Phase 3 study of the vaccine, as well as the company’s manufacturing plans. The Phase 3 trial, which involved 30,000 people, establishes that Moderna’s vaccine is safe and effective. Of the 196 people in the study who tested positive for COVID-19, only 11 had gotten the Moderna vaccine and the rest received a placebo, meaning the shot was 94.1% effective in protecting people against disease.

“That’s almost bang on identical,” to the interim analysis of the data, which was released on Nov. 16, and based on 95 cases, says Dr. Stephen Hoge, President of Moderna. (That data led to a calculation of 94.5% efficacy.)

In addition, the company said in the final tally there were 30 cases of severe COVID-19, and all of these cases were among people who received placebo.

“We believe the data strongly supports [emergency authorization] for all of the populations tested—adults 18 years and up, of different ethnicities and age groups,” Hoge tells TIME.

Read more: Why You May Not Be Able to Get Pfizer’s Frontrunner COVID-19 Vaccine

Moderna’s vaccine is based on mRNA, or the genetic code of the COVID-19 virus, which, once injected into the body, acts as the software programming to the body’s immune system hardware, and primes immune cells to recognize and attack the viral genetic material.

Prior to the pandemic, mRNA technology was a promising platform for vaccines, but had not led to an approved shot. On Nov. 20, Pfizer became the first company to apply for FDA authorization for an mRNA-based vaccine for COVID-19. The FDA will review that application on Dec. 15. Moderna said that the FDA will likely review Moderna’s application two days later on Dec. 17.

Hoge says the company’s vaccine proved safe and effective in a diverse population of people, including African-American and Latinx groups, an important data point since these populations have been disproportionately affected by the pandemic and would likely benefit most from immunization.

Moderna developed its vaccine in record time: 63 days after the genetic sequence of the COVID-19 virus was released, its scientists—working with researchers from the National Institute of Allergy and Infectious Diseases—had developed a vaccine ready to be injected into the first study participant. With $955 million in financial support from the Biomedical Advanced Research and Development Authority (BARDA), Moderna is preparing to fulfill its contract with the U.S. government to provide 20 million doses of its vaccine by the end of 2020.

Hoge says the company has already produced millions of doses in anticipation of FDA authorization, so that vaccines can start shipping as quickly as possible if that authorization is given. Moderna is manufacturing doses from its Massachusetts facility, but is also preparing another in New Hampshire as well as one in Switzerland to meet its goal of providing 500 million to 1 billion doses globally in 2021.

“I personally feel this is an incredible milestone,” Hoge says. The filing represents the pioneering role the company could play in advancing not just mRNA technology but how we develop vaccines against pandemic diseases in the future, he says.

“But the goal is to stop the pandemic, and we need to deliver 100 million doses, then the second 100 million doses after that. There is a sense we are still fighting the war,” Hoge adds. “It’s sort of inspiring, and sort of, ‘wow,’ to look back. But at another level if we look forward, we have a lot of work to do, and at least three to six months before we beat this thing, so now is not to time to be too reflective.“ 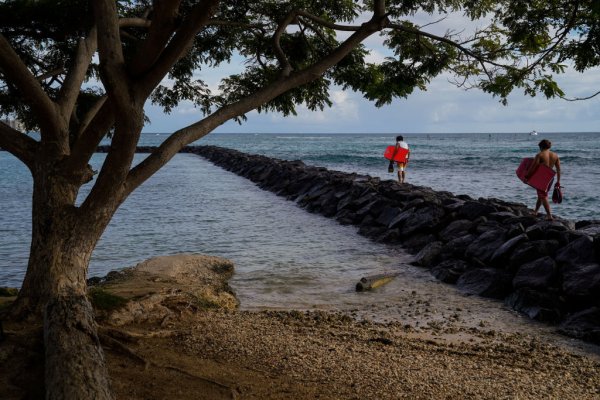 How Is Hawaii Keeping COVID-19 Under Control?
Next Up: Editor's Pick