For Trans People Worldwide, The Last Year Was One of the Deadliest on Record. But the Community Has a Long History of Resilience

Members of the Telangana Transgender community hold a candlelight vigil to mark the 'Transgender Day of Remembrance', in Hyderabad on Nov. 20, 2019.
Noah Seelam—AFP/Getty Images
By Suyin Haynes

For Viviane Vergueiro Simakawa, Nov. 20—this year’s Transgender Day of Remembrance—is about imagining futures for the transgender and gender-diverse community as much as it is about mourning and remembering lives that have been lost.

The Day was first observed in 1999, launched by transgender advocate Gwendolyn Ann Smith to honor the memory of Rita Hester, a Black trans woman who was murdered in Massachusetts the previous year, and other trans women who had lost their lives since Hester’s death. Since then, it has become an annual tradition, observed by the community and allies the world over.

“I try to keep in mind that we do not forget each other, we care for each other, and we respect each other, no matter how much the system might despise our trajectories,” says Simakawa, a transfeminist activist and researcher based in north-eastern Brazil and program officer with the International Trans Fund (ITF), which works to support trans-led groups and movements across the world. The Day of Remembrance is also a means to recognizing “trancestry” in Brazil, she adds; that is, trans and gender-diverse elders who helped those from younger generations like herself to affirm their own identities.

It’s a profound observation in Brazil in particular, where 152 trans and gender-diverse people were killed between Oct. 1 2019 and Sept. 30, 2020. That’s the most deaths reported in any country in the world through that time period, one of the many sobering statistics from a new report released by the Transgender Murder Monitoring (TMM) project. Overall, the data shows the second highest number of cases in a single year, and a 6% increase in reported murders from 2019. 97% of those murdered were trans women or trans feminine people; 62% were sex workers. Employment discrimination, lack of opportunities, and barriers to legal gender recognition can force some trans people to turn to sex work, where they are at disproportionate risk of violence and police harassment.

“[Nov. 20] reminds us that violence towards one of us is violence towards all of us. It reminds us of the urgency and importance of building more self-aware, resilient, and connected trans movements,” said a joint statement from 25 social justice organizations from around the world, including the International Lesbian, Gay, Bisexual, Trans and Intersex Association (ILGA) and Transgender Europe (TGEU), which leads the TMM project.

Since Jan. 1, 2008, the TMM project has monitored reports of transgender murders. Since then, the number of cases recorded reached a total of 3665 in 75 countries and territories worldwide. In the U.S. 89% of those killed were trans or gender-diverse people of color. The killings of Black trans people including Tony McDade, Nina Pop, Riah Milton and Dominique “Rem’mie” Fells ignited national anguish amid the Black Lives Matter protests in the U.S. this year. In June, an estimated 15,000 people gathered for the Brooklyn Liberation march in New York, wearing white and paying tribute to Black trans lives.

On Nov. 20, President-elect Joe Biden released a statement promising to honor transgender lives and rights both in America and around the world. “From the moment I am sworn in as president of the United States, know that my administration will see you, listen to you, and fight for not only your safety but also the dignity and justice you have been denied,” Biden wrote.

The TMM project names every single victim where possible, many of whose deaths are often not covered or investigated extensively, such as 45-year-old Anel Valenzuela, who was killed at the beauty salon where she worked in Fortin, Mexico, or Mamta, who was killed in February by her partner in Ahmedabad, India. TMM’s researchers also note that the number of murders is likely to be higher than the report outlines, due to challenges in and a lack of data collection, as well as trans people being misgendered by families, authorities and the media.

The data in this year’s TMM report also comes in the context of the coronavirus pandemic, which has severely impacted the transgender community worldwide. “The pandemic has made survival more critical for many trans people, and definitely in our favelas and marginalized communities, this has been an important issue,” says Simakawa, who says that many of the trans-led groups the ITF works with have turned to emergency relief activities to meet basic needs, including providing food. “It’s frustrating to see how underfunded we are as a community,” she adds. Chamindra Weerawardhana, a consultant on gender identity, expression and sex characteristics at ILGA, agrees, adding that trans communities have often had to form support networks for each other amid crises—particularly those in indigenous communities in the Global South who may be affected by climate change and displacement, and others who rely on a daily wage to survive.

But such tight-knit grassroots networks and community-building initiatives are also affording many trans people the opportunity to cultivate authentic leadership and activist positions. In Brazil, Simakawa says trans and gender diverse communities are becoming more autonomous and empowered, particularly in supporting the lives of those within the trans community where federal and state institutions have failed to do so. She says the work of National Association of Travestis* and Transsexuals (ANTRA), a national organization which is responsible for collecting data for the TMM project among other goals, has been vital to trans-led resistance.

Read more: Elton John Says Members of the Transgender Community Are ‘The Bravest People in the World’

According to ANTRA’s figures, 281 trans people ran for local political posts in Brazil in this month’s elections—the first where trans candidates were able to run under their chosen names and the first elections since those in 2018, which ushered in a win for the country’s far-right President Jair Bolsonaro. Transgender candidates Erika Hilton and Thammy Miranda were both elected to the city council in Sao Paulo, Brazil’s biggest city, this week, along with a number of other candidates who won seats to their local councils. While a majority in Brazil’s Supreme Court last year voted in favor of criminalizing homophobia and transphobia, and legal gender recognition is possible for transgender people without medical criteria, there are still frequent attacks on the broader LGBTQ community from the Catholic Church, conservatives, and President Bolsonaro. In this context, Simakawa hopes that the greater involvement of trans people in institutional politics, as well as sustainable support for grassroots organizations, could help push for greater equity in issues beyond gender identity, including housing policy and environmentalism.

For Weerawardhana, Transgender Day of Remembrance is a day to acknowledge these systemic issues that contribute to the levels of violence, while recognizing the vast diversity of experiences within the transgender community. “It is a day of remembrance of those who have passed and those who have faced violence,” says Weerawardhana, “and it is also a day to acknowledge the resilience of trans communities, people who try to protect each other, look after each other and celebrate each other and live their lives.”

Correction, Nov. 20
The original version of this story misstated Chamindra Weerawardhana’s last name in two instances. It is Weerawardhana, not Weeradwardhana. 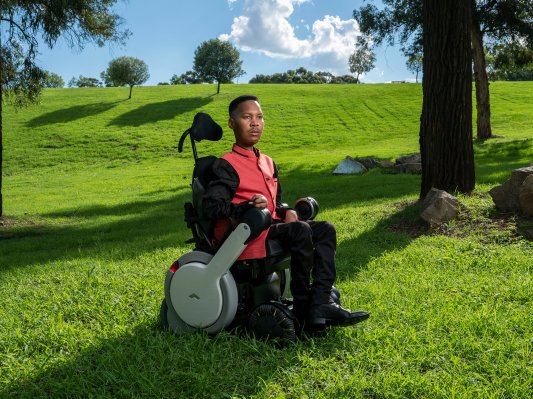 Celebrating 30 Years Of Existential Defiance
Next Up: Editor's Pick