Donald Trump Is Endangering America's National Security for His Ego

At the height of a global pandemic and in the depth of a national recession, Donald Trump has endangered our national security by forcing the Pentagon into his latest culture war.

Since the moment it was clear he was going to lose the election, Trump has spent his time spewing conspiracy theories so baseless they’ve been debunked by his own officials. He has used these lies as rationale to refuse to accept the results of what his own Administration has called “the most secure [election] in American history” or take the first steps toward a peaceful transition of power to a new Administration. One senior Republican official even told The Washington Post, “What’s the downside for humoring him for this little bit of time?”

Personally, I simply cannot comprehend how any official could be so glib when the “downside” of “humoring him” is anything but funny.

What’s the downside? Well, one is the growing threat to America’s national security. What’s the harm? That Trump and his enablers expose vulnerabilities in our democracy to our adversaries at the very moment when it’s critical for our nation to project strength.

As he’s refused to concede, Donald Trump has upended any sense of stability at the Pentagon. First, he fired Defense Secretary Mark Esper, replacing him and other top Pentagon officials with a series of unqualified loyalists who seem to have been chosen for their fidelity to the President rather than any semblance of competence. Then, he reportedly looked into options for attacking Iran. Now, he’s pushing forward a plan to withdraw U.S. troops from Afghanistan in a manner so reckless that Democrats and Republicans alike agree that it could arm our enemies, put our remaining troops at greater risk and doom the country’s peace process. And if that weren’t bad enough, drawing down troops without any concessions from the Taliban, as Trump appears set on doing, could extinguish any hope that the families of American hostages held in Afghanistan and Pakistan—like Illinoisan and Navy veteran Mark Frerichs who was abducted in January or February—will ever see their loved ones again. All because Trump gave away our best bargaining chip when it comes to their release and to peace in the county in exchange for nothing.

Of course, we’ve known from the beginning that Trump values loyalty to himself above loyalty to this country and prioritizes his own self-interest above our national interest. Since day one, he’s used our national security apparatus to settle petty scores, hiring and firing those who make decisions of war and peace often based on who pandered to him most on Fox News that weekend. But the recent upheaval represents a dangerous escalation at one of the most fraught moments possible.

Historically, our enemies have tested us within the first year of a new Administration. Less than six weeks into Bill Clinton’s term, a truck laden with explosives detonated in the basement of the World Trade Center. Within six months of Barack Obama taking the Oath of Office, North Korea had rattled its sabers twice, launching a rocket over the Pacific and then conducting a nuclear test. Four months after Trump was sworn in, Syria’s Bashar al-Assad launched a chemical weapons attack that killed at least 90 people. And, of course, nine months into George W. Bush’s presidency, terrorists crashed two planes into the Twin Towers, killing thousands of Americans on September 11, 2001.

One look at the past trend, and the value of ensuring a smooth, stable transition between Administrations becomes obvious. So, too, does the necessity of ensuring that the next Commander-in-Chief is fully briefed on the gravest national security threats the moment they step into the Oval Office. That’s why incoming Administrations are typically given access to Defense Department buildings and personnel. Clinton did this for George W. Bush who in turned did this for Barack Obama. That’s the way our system works.

Yet instead of following precedent, Trump has chosen to traffic in conspiracy theories and stonewall the transition process. His White House has barred Administration officials from cooperating with Biden’s transition team, while his refusal to concede has prevented incoming officials from entering DoD premises or getting the intelligence they need to protect our country from day one. He’s prevented Biden from having access to the same all-important President’s Daily Brief that he’s neglected to read over the past four years—and even kept him from having access to a secure government line to make calls to other world leaders.

Rogue states, terrorist groups and adversaries like Russia are all watching us right now. They know that countries are inherently more vulnerable during periods of transitions. They see that we now have lackeys instead of experts in crucial Pentagon positions. They understand that Trump is desperate to save face—and they’re aware of the opportunity this presents for their own strategic goals, whether or not they are diametrically opposed to American interests.

Our military will always do its job, sacrificing the unimaginable to keep the rest of us safe. Yet Trump is actively making its job harder. He’s sowing chaos when we most need stability, exposing weaknesses to bad actors who’d like nothing more than to exploit the confusion of the transition for their own gain. In other words, he’s emboldening our adversaries at the very moment when they were already prepared to be boldest.

It is time for the leaders of the GOP to say enough. It is time that they recognize the very real downside of “humoring” Trump’s claims of fraud when they know that these claims themselves are fraudulent. Whether he acknowledges it or not, in 61 days, Trump will no longer reside at 1600 Pennsylvania Avenue. With all that is at stake, it is on the Republican Party to prove that they care more about protecting our national security than protecting one man’s ego. 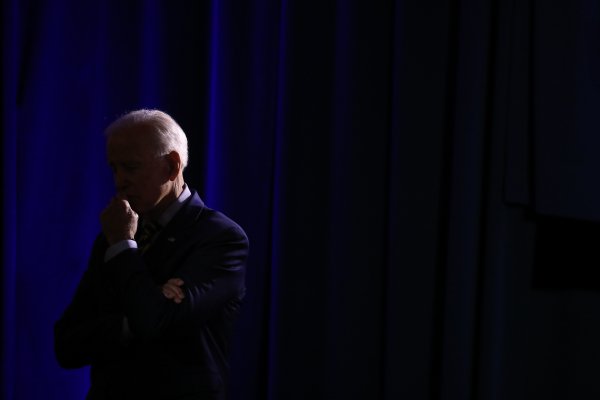 Biden Faces a World That Will Be Wary of U.S. Leadership
Next Up: Editor's Pick