For Central America, this year’s storm season has been relentless. Already struggling under the economic toll of COVID-19, the developing region was battered by Hurricane Eta in early November and had little time to regroup before Hurricane Iota—the 30th named storm in a record-breaking hurricane season in the Atlantic— made landfall in Nicaragua on Nov. 16.

At a press conference in Tegucigalpa held hours before Iota began to hit, Honduran president Juan Orlando Hernandez said that his country already had 7% of its GDP wiped out by the pandemic, and that the combined impact of COVID-19 and two deadly storms will create a “bomb that will leave the country and the region in a very difficult situation.”

For leaders in the region, the storms have crystallized the injustice that is playing out around the world as extreme weather becomes more common in a destabilized climate. “We in Central America aren’t the ones who caused climate change. But we are among the most affected,” Hernandez said. “The countries that have recognized they are the main drivers of climate change have the money available.”

The region’s presidents said Nov.16 they would work together to pressure richer countries to quickly release aid via regional development banks. Here’s what to know about the impact of hurricanes Eta and Iota, and what is being done to help the countries impacted.

How have Eta and Iota impacted Central America?

Eta killed some 150 people across the region and forced 300,000 to flee their homes as floods and mudslides swallowed up entire towns across Honduras and Guatemala. Extensive flooding was also reported in Mexico, Nicaragua, Panama, Costa Rica, Belize and El Salvador.

These devastated communities now face Iota’s strong winds and up to 30 inches of rain, while relief agencies say crowding in emergency shelters, and cuts to water and power supplies, will likely trigger spikes in COVID-19 cases in affected areas over the coming weeks.

Mauricio Paredes, Vice-President of the Honduras Red Cross, says the rapid arrival of Iota just two weeks after Eta is severely complicating disaster response in the country. “We’re used to dealing with flooding. But the magnitude of this is just overwhelming,” he says.

Displaced Hondurans are having to move to new shelters as new areas of the country flood, Paredes says, while some areas that flooded during Eta are now seeing waters rise even faster and higher as flood defenses have been destroyed. A key airport in Honduras’ second city of San Pedro Sula has been flooded during both Iota and Eta. “That’s going to present a huge challenge to us for bringing in aid from outside the country,” Paredes said. Many Red Cross volunteers have themselves lost their homes, he added.

How has climate change contributed to Eta and Iota?

Eta is considered one of the worst weather-related disasters in the region in the last two decades. It has been as devastating as Central America’s Hurricane Mitch, which killed 11,000 people in 1998. But we may now be entering an era where very deadly storms are no longer once-in-a generation events.

Meteorologists tracked more hurricanes in the Atlantic this season than ever before, and though no one storm can be blamed on climate change, scientists agree that a warming planet makes weather patterns more destructive.

In Central America, climate change has increased the intensity of both rains and droughts, according to the U.N.

Is the rest of the world sending aid to Central America?

Relief agencies, including the Red Cross, CARE and U.N. bodies have sent teams in the countries affected by the storms to help communities cope with the immediate impact.

At a meeting with leaders from Nicaragua, Costa Rica and Honduras on Monday, Cabei, the region’s development bank, said it had approved a $2.5bn fund “designed to finance projects that address and prevent disasters and calamities in order to adapt to the effects of climate variability and change.”

But regional leaders are also pushing for rapid access to large international funding pots, like the U.N.’s Green Climate Fund, which they claim are too slow and too difficult for them to access. “To get access to green funds, we must fulfil a series of tedious procedures, but hunger can’t wait,” Guatemalan president Alejandro Giammattei said.

Though developed countries have agreed to jointly raise $100bn a year for the U.N.’s “green climate fund” to help developing nations adapt to and mitigate the impacts of climate change, so far donors have pledged only a fraction of that. (In 2017, U.S. President Donald Trump said he would end U.S. contributions to the fund.)

Giammattei argued that the impact of the storms presented an urgent moment for “industrialized nations” to increase long-term development support for Central American nations. He said this would be necessary to prevent large flows of people migrating from the region to other countries because of the impacts of climate change, gang violence and the pandemic’s impact on the economy. “If we don’t want crowds of Central American going to other countries in search of a better life, we have to build walls of prosperity in Central America. Because physical walls are not going to stop people’s needs.” 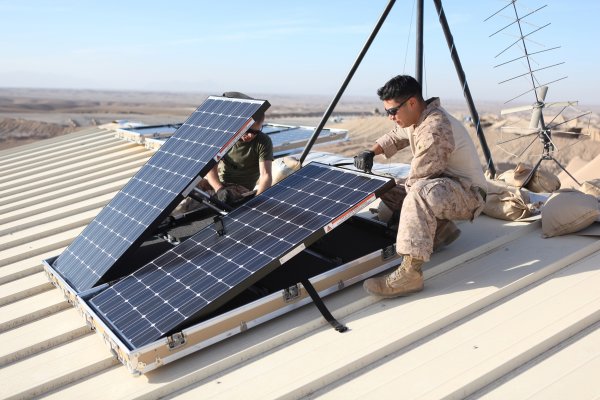 The U.S. Military Must Lead the Way on Climate Change
Next Up: Editor's Pick