It's Time to Rethink Thanksgiving. Here's How to Have That Conversation With Your Family

One of the things Julia Seibolt likes about Thanksgiving is the opportunity to get drunk with her mom. She also likes complaining about how everyone else is watching football. And she enjoys how her family gathering often includes random people who don’t have family nearby.

Except there will be no family Thanksgiving for Seibolt’s family this year—they called it off last week, as COVID-19 spiked across the country. Julia says it took a few phone calls and some back-channeling through her father to finally persuade her mother that it simply wasn’t going to be possible. There would be no time to quarantine. Her brother would have to fly in from California. It just wouldn’t be safe.

If ever there were a year in which people would welcome a chance of a normal, traditional occasion, it is 2020. If ever there were a year where parents would welcome the chance to lay their eyes on their children, feed them and make sure they were OK, it is 2020. Indeed, a recent study from the Wexner Medical Center at Ohio State University found that almost 40% of Americans intend on spending Thanksgiving at a gathering of more than 10 people, despite the health risks to themselves, their fellow guests and their wider circle.

Still, many others, like Julia, are telling their families that they won’t be coming home or hosting this year. That’s a hard conversation to have. “I’ve been talking about this many hours of the week with my patients,” says Anne Fishel, a clinical psychologist and the executive director of The Family Dinner Project, a not-for-profit that provides resources to help families eat together more often. “No matter what else is going on, most of my patients have said ‘I really need to talk about Thanksgiving.'” So we asked Fishel and other family and negotiating experts for their advice on having these talks—or even persuading relatives to cancel their Thanksgiving plans altogether. Here’s what they said:

This is not a conversation one should put off. “You want to do this as soon as possible,” says Robert Taibbi, a clinical social worker and therapist in Charlottesville, Virginia, and author of 11 books. “So people have a heads up. Because they already bought the 25-lbs. turkey and they’re going ‘What the hell am I gonna do with this?’”

You may also find, as Julia did, that your family members need time to process the news and think through the implications of gathering. Not everybody shares the same understanding of a highly infectious disease that can be spread by people with no symptoms, to put it mildly, and it may take family members a while to get on the same page.

Furthermore, choose your method of communication wisely. “Face-to-face conversations have the potential for greater understanding of one another’s emotions,” says Daniel Ames, a social psychologist and management professor at Columbia Business School—just keep it to video chat rather than in-person. “But if you’re great at expressing your point of view constructively in writing, you might consider using that channel.”

Don’t stick to the facts

“Facts aren’t going to work,” says Taibbi. This is not a time to break out your line graphs and cite local statistics. “You don’t want to go down a rabbit hole of that kind of stuff,” he says, “because then you get into arguing about whose reality is right.”

Instead, stick to your concern for other family members, particularly the older ones. “You say: ‘I’m not comfortable. I don’t want to have to worry about you,’” says Taibbi. “I’m worried about [other relatives] coming over too.” Some families, notes Fishel, may understand it more in terms of patriotism, that this feels like wartime, when everyone has to make sacrifices. Others may resonate more with the idea that your fear is for the most vulnerable, whether that’s the elderly or the children who will have to miss more school if there’s a breakout.

“Try not to be judgmental,” says Yan Wang, a psychology professor at Endicott College, if some family members don’t agree that the occasion should be skipped. “We all have different needs.” Instead, Ames suggests, try to figure out what people really want. “If your brother wants the largest family gathering possible, why? What’s most important about that to him?”

Taking a posture of curiosity towards your reluctant relatives ensures two things. “It can give them the experience of being heard and understood,” says Ames. “And it can give you information that might point toward ways to proceed.” The recipe for this conversation, says Taibbi, calls for “about 800 lbs. of empathy.”

“Thanksgiving is the mother of all family dinners,” says Fishel. ”It reminds us who we are as a family. Maybe more than any other holiday, it also connects us to generations past, often through the food.” Disappointment over skipping it is natural, especially in a year full of uncertainties, sacrifices and losses. Relatives might need to be reassured that this is not about them, that you wanted to come and that there will be more such gatherings. A cancellation “may make family members fearful that this could lead to a more permanent disruption,” notes Fishel. Acknowledge those fears and address them.

Look for a compromise

“Good negotiators tend to step back and look for creative possibilities that address the interests of all involved,” says Ames. “If you know your real objective is to minimize the spread of COVID-19, and your brother’s is to maximize family togetherness, you can look for solutions that do at least some of both.” While having the full Thanksgiving experience is imprudent, Wang suggests that you can recreate the important parts of it. “You can do one thing at a time: cook your daughter’s favorite food and deliver it to her house without having social interaction, then have social interaction online, but everybody’s eating their own food.”

Fishel’s organization has a downloadable Thanksgiving care package that families can download, so families can send each other games or conversation starters. She also encourages using Zoom creatively. “Maybe there’s an uncle who makes a really great light pie crust, and this will be the year that he teaches the rest of us how to make it.”

Many faiths celebrate the idea of a sabbath or even a jubilee, when things rest or are cancelled. And lots of people are familiar with the idea of a sabbatical, a time when people stop their customary work and do something different for a while. This year could be Thanksgiving dinner’s sabbatical. Most of the experts we spoke to suggested that you can temper your own disappointment and that of your loved ones with your expectation and assurances that this too shall pass. But they also added that this is an opportunity to refresh and rethink the old traditions of the day—and introduce some new ones.

“American people are very good at being creative with new ideas of celebrating,” says Wang, who suggests that instead of just cancelling Thanksgiving gatherings, people should make an active effort to hold them in a different way. Maybe some of those traditions will stick, and if not, there’s always next year. Meanwhile, Julia has promised her mother to come for Christmas, because there will be time for quarantining before and afterwards. Plus, she’ll still get to complain about football. 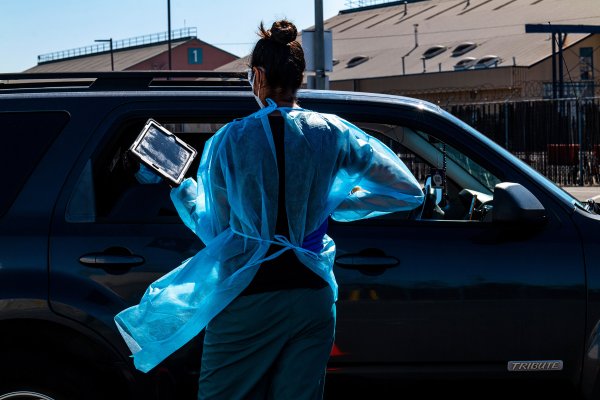 How We Can Stop the Spread of Coronavirus
Next Up: Editor's Pick