‘Civic Engagement Doesn’t Have to Be Corny.’ How Georgia Pulled Off Unprecedented Youth Voter Turnout

“Everything is crazy, but we organized for this,” says Nsé Ufot. The CEO of the New Georgia Project, a voter support and legal action non-profit, is at her home in Atlanta on the Thursday morning after the election as vote counts continued to trickle in for the battleground state. In the background, her dogs are mewling: they want the vegan breakfast sausage she’s cooking. But Ufot is keeping it for herself. She’s earned it: after leading the New Georgia Project for the last half-decade, her state is on the verge of delivering a game-changing win to Vice President Joe Biden.

That Atlanta’s voter turnout was so high—particularly among young voters, historically the demographic with the lowest voter turnout of all—may be the story of the election. Youth voters contributed a full 21% of Georgia’s votes, according to the Center for Information and Research on Civic Learning and Engagement, or CIRCLE, at the Tisch College of Civic Life at Tufts University. Nationally, the average is 17% this year, compared to 16% in 2016, making Georgia’s youth contributions the highest in the country. (This election has also seen the highest overall voter turnout in U.S. history.) In Georgia, young voters skewed heavily Democratic, casting ballots for Biden about 18% more than for Trump—especially young voters of color and young Black voters, 90% of whom voted for Biden. (Young white voters voted for Trump a full 62% of the time.) “If Georgian young people voted like the 30-34-year-olds, even that would have made Biden be losing by 11,000 votes right now,” says Kei Kawashima-Ginsberg, the director of CIRCLE. “If young people came out in a slighter smaller number—if they came out like the rest of the country—Biden would still be losing.”

The 18- to 29 demographic has long had the lowest voter turnout in the country, and Georgia’s great success could serve lessons on what efforts actually get them to the polls. It came down to grassroots organizing by groups like the New Georgia Project, Campus Vote Project, Students for 2020 and Opportunity Youth United, which made innovative social media moves and hired younger volunteers to help young voters see themselves in politics. “These numbers are not magical,” says Ciarra Malone, Georgia’s State Coordinator for the Campus Vote Project. “Georgia is only a battleground state right now because of the youth vote and how many young people in the Atlanta area have turned out to vote. Organizers, especially young organizers, have been working especially hard.”

The flip all began with Democrat Stacey Abrams’ 2018 run for governor of the state, facing Republican Brian Kemp. In an election mired in controversy, Abrams came in just 1.4% behind Kemp. Abrams and her campaign alleged that the state purged voter rolls, unnecessarily rejected absentee ballots and closed polling places early, all working against Abrams’s supporters. She maintains it was a stolen election. Since then, Abrams has gone on to become a national voice for reversing voter suppression and disenfranchisement. For Georgia residents who voted in, lived through and lost that election, the lessons were learned the hard way: to win, they would have to make sure that every vote could be counted fairly. It galvanized a generation of Georgians to pay much closer attention to their elections processes.

“She laid the groundwork for young people to get involved,” says Bhavin Patel, 19. “She inspired so many young people.” Patel is president of the state’s College Democrats association; he’s also a student at Kennesaw State University, and a voter in Cobb County. He wasn’t eligible to vote when Abrams was running, but this time around, he and his peers have made registration and voter messaging a major priority. “Since the pandemic, we’ve not been able to have a lot of in person events, so we’ve had a lot of online and virtual work,” he says: their organization posts regularly on Instagram, directing students to registration and voting resources, and hosts virtual events like speaker forums with Democratic Senate candidates Jon Ossoff and Rev. Raphael Warnock, which have drawn thousands of viewers. (Now, both candidates are facing run-offs—and could tip the ultimate balance of power in the Senate.)

One particularly potent effort has come from the New Georgia Project. Originally founded by Abrams in 2013 and currently led by Ufot, NGP rethought their strategies when the pandemic hindered in-person organizing abilities. Instead of setting up voter registration at the homecoming events of HBCUs—a successful tactic in the past—they switched to digital, hosting online events like exclusive sneaker giveaways. After registering 9,000 new voters during a livestream on Twitch, the gaming platform, for National Voter Registration Day in September and following up on further buzz around Congresswoman Alexandria Ocasio-Cortez’s Twitch stream in October, they organized one last innovative push. On election day, their “Twitch the Vote” 12-hour livestream of performances, special appearances and gaming drew half a million unique visitors. Beyoncé’s mom Tina Knowles dropped by the event urging viewers to vote. So did astronaut Mae Jemison, the first black woman in space. And rapper Dave East, “the most handsome rapper ever,” as Ufot describes with a laugh. To Ufot, it is no surprise that Georgia has led the country with the highest jump in youth voter registration since 2016. “I’m most proud of that because I know that’s our work,” she says. “Civic engagement doesn’t have to be corny. As people who legit every day talk about voting, part of it is just for ourselves to continue to innovate so our jobs don’t get boring. Our goals didn’t change. Our tactics did.”

Making activism and civic engagement cool requires buy-in on multiple levels. For some young Atlanta residents, the anxieties of the past few years—from the disenfranchisement of the 2018 election to the racial justice movement and pandemic mismanagement—have spurred them to get involved in person, and the increase in young volunteers has helped inspire their peers to participate in democracy. Avery Alexander, a 28-year-old middle school teacher from DeKalb County, signed up for the first time this year to canvas with Unite Here, the country’s largest canvassing organization; this week, she’s been going door-to-door curing ballots and making sure that absentee ballots get counted. She saw the students in her classroom react negatively to Trump’s rhetoric, and decided to put her own privilege to use. Attorney Evan Glustrom, 30, was a deputy registrar on Election Day for the first time, working at the polls. “It’s a lot more motivating to be involved when there’s something on the line,” Glustrom says. “It felt like, in Georgia, there really was something.”

Eliza Cherry, 29, a freelance video production manager living in the suburb of Sandy Springs, says there was an all-in-it-together feeling this year. “It’s legitimately everywhere,” she says of political messaging for voter turnout, from Instagram to TikTok. “I think what’s working is hearing that people my age are actually getting out on the street and doing the whole door-to-door thing. It’s not just social media like it was four years ago. I’m seeing it so much more this year, where people are really passionate,” she says, adding that it was “shocking” to hear of someone not voting in this election. She recently offered a paid freelance opportunity to someone who turned it down in favor of election volunteering.

To Alexander, the middle school teacher, and Patel, the college organizer, Georgia’s “purple” status feels like a referendum on the current government, and a reflection of young people itching for a change. According to the Tufts CIRCLE study, the pandemic was the preeminent factor for Biden-voting young people this year. Georgia has been hit hard by COVID-19: with over 360,000 cases and 8,000 deaths in the state so far, Governor Kemp instituted one of the country’s shortest lockdowns and tussled with local authorities over mask-wearing mandates. As fall wears on, Georgia’s case rate is spiking again. “Young people very much want their lives to go back to normal. Gen Z and millennials all want to be going to concerts and events and going out with friends in Atlanta, and we’re not able to,” Alexander says.

Ufot says the racial justice movement of this summer shifted participation a lot for Black youth, especially. “There’s a lot of anxiety amongst Black youth—youth of color, youth period—is this our country? Is this what we are inheriting? They are young enough and smart enough to think that things don’t have to continue to be that way,” Ufot says. “I think that having the opportunity to take a beat because of quarantine and connect the dots between the things that are oppressing and how to do something about them [has mattered].”

Issues aside, the excitement around volunteering to get out the vote was palpable. Malone remembers a Saturday during early voting when an unexpected downpour started drenching voters in line for their polls. She and other organizers rushed to hand out plastic rain ponchos. “We were soaking wet, but without us being there, what if they simply went home?” she says. A few minutes later, she noticed volunteers from organizations like the New Georgia Project and Planned Parenthood had joined their efforts. “All these organizers everywhere were just helping out to keep people in line to cast a vote. Because that’s just how important it is here,” she says. “That’s a super powerful feeling: to know we’re not doing this alone.” The vote totals show just how effective that group effort was, in the end. “Things can feel very cynical. But young people did their job here. People turned out here, and that’s really important to talk about,” says Malone.

They’ll have a chance to do more soon. The Senate run-offs are scheduled for Jan. 5. The New Georgia Project is already posting memes that advise young people who turn 18 before Dec. 7 that they will be eligible to be part of the youth turnout for the first time. If they vote the same way other teens and twentysomethings voted in the general election, this generation of Georgians could offer the new President the missing key to his first term: Democratic power in the Senate. 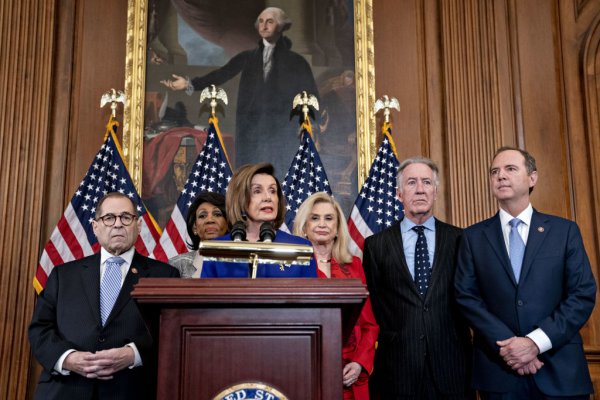 Democrats Bicker After Election Results Fall Short of Hopes
Next Up: Editor's Pick