Stacey Abrams Is Refusing to Concede the Georgia Governor's Race. Here's What Could Happen Next

With one of the country’s most closely-watched gubernatorial races still too close to call, Georgia could be heading for a run-off election.

Democratic candidate Stacey Abrams currently trails Republican Brian Kemp, who as of Thursday morning has more than 50% of Georgia’s 3.9 million reported votes, according to the Associated Press. Kemp — who on Thursday resigned from his post as Georgia’s secretary of state, a role that allowed him to preside over state elections — has declared victory, saying Abrams cannot capture enough outstanding votes to win the race.

But Abrams — who would be the nation’s first female black governor if elected — maintains that votes still need to be counted, and has said she will not concede the race until that happens. “We believe our chance for a stronger Georgia is just within reach, but we cannot seize it until all voices are heard, and I promise you tonight we’re going to make sure that every vote is counted,” Abrams said in a speech to supporters early Wednesday morning.

Jennifer McCoy, a political science professor at Georgia State University, says Abrams may be right, given the higher-than-average number of absentee and provisional ballots used in Georgia this year, many of which have yet to be tallied.

If enough of those votes go to Abrams, McCoy explains, a run-off could be triggered under Georgia law, which states that a gubernatorial candidate must receive more than 50% of the vote to win. Kemp currently has the necessary majority of the vote, but “the possibility is that his percentage could come down” as more ballots are counted, McCoy says.

Abrams is “not refusing [to concede] on the basis of nothing. She’s just saying, ‘Let’s wait until we actually count every last ballot,'” McCoy says. “Even if [Kemp’s percentage drops to] 49.9%, it would go to a run-off.”

That possibility is feasible, McCoy says. Concerns over the age and quality of Georgia’s voting machines led an unusually high number of people to use absentee ballots this year, McCoy explains, and some of those ballots are still being counted.

Plus, many Georgia residents saw their voter registration status flagged this year — leading some to allege that Kemp, who oversaw the electoral process until his resignation Thursday, was intentionally suppressing minority votes (he has denied those charges). Many of these flagged voters had to use paper provisional ballots, which in some cases require voters to return to their county election board within three days to prove residency or citizenship, McCoy says. As such, ballots could remain uncounted until at least Friday.

Abrams’ campaign has said she needs only about 15,000 more votes to trigger a run-off, AP reports. Kemp, however, said the Abrams campaign is using “old math” and would actually need about 30,000 votes — a number high enough for the Kemp campaign to full comfortable declaring victory.

The Abrams campaign has also announced that it will file a lawsuit against Dougherty County, claiming that some residents who requested absentee ballots either never received them or got them too late to cast their votes, the Atlanta Journal-Constitution reports. If the lawsuit is successful, even absentee votes received late would be counted, according to the Journal-Constitution.

McCoy says voters could find out whether there will be a run-off as soon as this week. If one is triggered, it will be held on Dec. 4. The difficulty for both Abrams and Kemp, then, would be getting voters to return to the polls.

“The challenge then for both candidates, for both sides, is actually to get people to come back,” McCoy says. “Typically the turnout drops for a run-off.”

No matter how many people vote, however, either Abrams or Kemp would win a run-off. Only the top two candidates would advance to a second round of voting, leaving Libertarian candidate Ted Metz, who got about 1% of the vote on Tuesday, off the ballot.

Whatever the result of the contest, McCoy says the election speaks to the racial factors that still play into American politics, with exit poll data showing that Georgia residents largely voted along racial lines.

“There’s still a pretty stark racial divide,” McCoy says. “That raises questions for the state and the country … about to what extent are we ready to be a multi-racial country.” 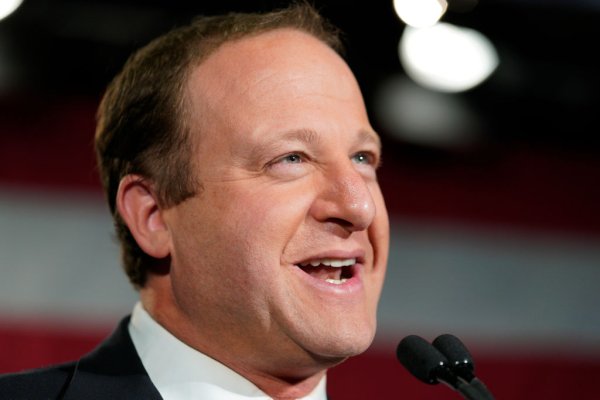