Supporters of President Donald Trump bang on the glass during a protest outside a room where absentee ballots were being counted at the TCF Center in Detroit on Nov. 4, 2020.
Jeff Kowalsky—AFP/Getty Images
By Eric Lichtblau

In a directive that appears to skirt longstanding prohibitions, the Justice Department told federal prosecutors early Wednesday they can send armed federal law enforcement agents to polling sites where votes were still being counted to “prevent potential federal crimes,” according to an email obtained by TIME.

The advisory came in an overnight memo sent to United States attorneys nationwide after 1 a.m. on Wednesday, hours after polls had closed on Election Day. With President Donald Trump and Attorney General William Barr raising unsubstantiated charges for months about widespread election fraud, the memo raised immediate worries about the prospect of the Justice Department trying to help Trump by using federal agents to intervene in ballot-counting efforts.

Armed federal agents at the FBI, the Marshals Service, or other agencies are generally restricted from conducting investigations at election sites because of the prospect of intimidation. Justice Department policy guidelines note that a federal statute makes it a felony for any federal official to send troops or “armed men” to open polling places except under specific circumstances, including to repel “armed enemies” or to respond to bomb threats or active shooters.

The Justice Department email, which was also reported by the New York Times, made it clear there had been questions raised within the department about the guidance, specifically over whether polls were still considered “open” if voting had ended but counting was under way inside the polling stations. It said that “based upon further legal analysis,” officials concluded that the criminal statute “does not prevent armed federal law enforcement from responding to investigate or to prevent potential federal crimes at closed polling places or at other locations where votes are being counted or tabulated.” The email underlined the word “closed.”

In a brief statement to TIME on Thursday, a Justice Department official said the memo was sent “in anticipation that there could be disruption” as votes were being counted. “DOJ was not sending federal law enforcement anywhere, just making sure state and local officials knew federal government was available to help,” the official said. It was not clear if anyone took the Department up on its offer of armed assistance, even as protests erupted outside some vote-counting sites in hotly contested states.

The directive was sent by Richard P. Donoghue, whom Barr named in July as the Justice Department’s principal associate deputy attorney general. In the email, Donoghue made no mention of particular types of investigations that might warrant the use of armed federal agents at election sites. He also did not say if Department of Justice approval was needed before deployment of agents and indicated it was not, but that the department would want to be kept in the loop. “Should the need to send federal law enforcement officers to such locations arise,” the email said, “please make immediate notifications” to the department.

Wendy Weiser, an elections specialist at the Brennan Center for Justice at New York University School of Law, said in an interview Wednesday afternoon that the Justice Department’s interpretation of the federal statute is “implausible” and that the presidential election was clearly still going on even if polling stations themselves were closed to the public.

“For the Justice Department to issue the guidance on this day certainly raises concerns that someone may be contemplating inappropriate actions that violate the statute,” said Weiser, who was one of the authors of a report in October by the Brennan Center on prohibitions on the use of federal agents in election activities. “This is wholly unseemly and wholly inappropriate.”

Richard Hasen, an election law expert at the University of California, Irvine School of Law, said Wednesday that “the timing is quite curious, especially given earlier concerns about the politicization of the Justice Department to aid in any effort by the Trump campaign to try to contest the vote.”

Trump has vowed for months to unleash the resources of the federal government against what he claims is widespread voter “fraud,” and Barr has echoed a number of his claims.

Critics called the threat a desperate attempt at voter intimidation, and it did not come to pass on Tuesday. The Justice Department also drew sharp criticism from voting specialists in September when it announced it was investigating claims that nine discarded mail-in ballots had been found. Trump used the statement to fuel suspicion about the integrity of the mail-in ballots.

The administration’s aggressive stance on the use of armed federal personnel has drawn rebukes before now, most notably in June when Barr authorized federal agents to clear Lafayette Square Park near the White House of peaceful Black Lives Matters protesters to clear a path for Trump to walk to a historic church to be photographed holding a Bible. Officers from the U.S. Park Police and the National Guard used tear gas, explosives, horses and other aggressive tactics to clear the protesters.

Trump also has deployed federal agents to counter Black Lives Matter protests in cities across the country, including Portland, Oregon and Seattle.

Weiser at the Brennan Center said that she believed the Trump administration would face resistance from federal agencies if it sought to deploy armed agents to election sites. ”It would require a lot of people to be willing to ignore the rule of law in order for a plot like that to succeed,” she said. “Even if God forbid the FBI did it, then I think a court would step in to stop that.” 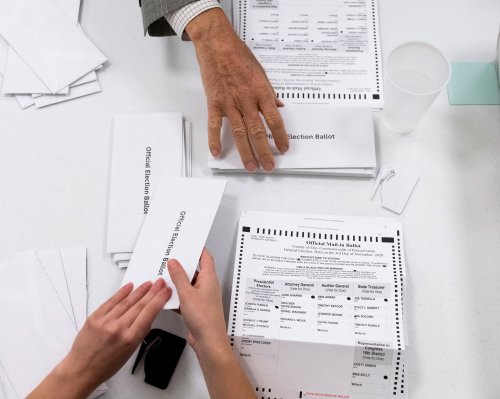 How the Mail-In Versus In-Person Voting Divide Gave America Whiplash
Next Up: Editor's Pick