Tea drinkers in Istanbul watch one of President Trump’s press conferences
Nicole Tung—Bloomberg/Getty Images
Ideas
By Ian Bremmer
Bremmer is a foreign affairs columnist and editor-at-large at TIME. He is the president of Eurasia Group, a political-risk consultancy, and GZERO Media, a company dedicated to providing intelligent and engaging coverage of international affairs. He teaches applied geopolitics at Columbia University’s School of International and Public Affairs and his most recent book is Us vs. Them: The Failure of Globalism.

It’s only fitting that the most divisive U.S. election in recent memory would end in a most divisive election-eve finish—one that will have consequences for America’s standing in the world.

As of this writing, the ballot count continues to be under way. President Donald Trump wasted little time before declaring victory, setting himself up to later claim that his opponents were trying to “steal” the election. For Trump—
a President who has shown remarkably little concern for the long-term health and legitimacy of U.S. democracy—-refusing to concede makes all the sense in the world. Beyond the powers of the presidency itself, Trump’s current and future command of the Republican Party is at stake, as is his ability to use the powers of the presidency to shield himself from financial and legal troubles. The chances of Trump’s gracefully conceding an election loss were always vanishingly slim.

While there remains a good chance that Joe Biden emerges victorious once all the ballots have been counted, a Biden loss will be devastating for Democratic supporters, many of whom could also feel that the election was “rigged” against them.

Regardless of the way the final presidential tally shakes out, one thing is increasingly clear—in 2020, there is no advanced industrial democracy more politically divided than the U.S. is today. Trump’s overperformance in the election relative to poll expectations solidifies that fact, and makes clear that the divisions in the U.S. electorate are more structural and ingrained than many political pundits had hoped heading into November.

The fact that neither side looks like it will quickly concede the election doesn’t mean that the U.S. is on the verge of becoming an authoritarian state; its democratic institutions, though admittedly weakened in recent years, still remain firmly entrenched, and the overall level of U.S. wealth continues to provide some cushion. But the U.S. is increasingly moving away from being a true, functional representative democracy in the mold of a Canada or Germany—where the direct will of the people is reflected in government policy and their elected leaders, and is widely accepted by the losing side—and is moving more toward being a hybrid political system, such as we now see in Hungary and Turkey. It isn’t quite that bad just yet, but it is trending worryingly in that direction.

Regardless of who ends up being sworn in as U.S. President, that means more dysfunctional U.S. politics at home, and a weaker U.S. international presence when compared with that of the past 50 years. On the domestic front, expect arguments over political processes and policy issues like free trade and immigration to continue raging and to divide the country; social media will also continue to drive the polarization of Americans of all political stripes. That dysfunction at home will in turn make it difficult for the U.S. to lead by example on vital issues like climate change and tech regulation. Or to face China with a united front on tough issues like trade and security. That’s true even if Biden does ultimately secure the presidency, as he will likely face a Republican Senate and be limited in how much political capital he can expend on foreign policy.

The world was looking for a “statement election” from the U.S. It got one; expect the next four years of U.S. politics, at home and abroad, to look more like the past four rather than the past 50. 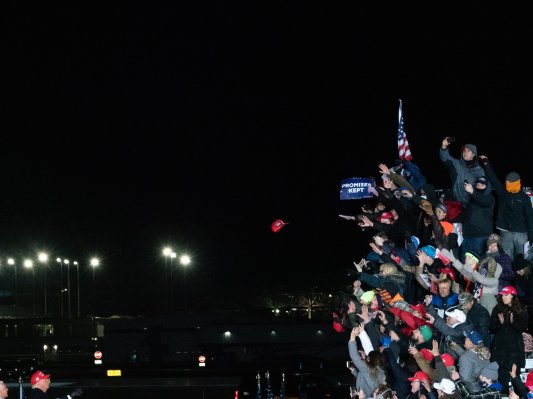