With Wisconsin and Michigan in Hand, Biden Projects Confidence But Urges Patience

As votes continue to be counted on Wednesday, the Biden campaign projected confidence about the outcome for the Vice President in key battleground states and the Electoral College, even as they urged Americans to remain patient until all votes were counted. By Wednesday evening, Wisconsin and Michigan had been called for Biden, bringing him just one state away from the 270 needed for victory.

“It’s clear that we’re winning enough states to reach 270 electoral votes needed to win the presidency,” Biden said in his remarks on Wednesday afternoon. “I’m not here to declare that we’ve won. But I am here to report that when the count is finished, we believe that we will be the winners.”

Biden added that he and Harris were on track to handily win the popular vote. “Senator Harris and I are on track to win more votes than any ticket in the history of this country that ever won the Presidency and Vice Presidency.”

As of early evening on Wednesday, Florida and Ohio had been called for Trump, while Arizona, Colorado, Wisconsin and Michigan had been called for Biden. Votes were still being counted in the key battleground states of Pennsylvania, Nevada, North Carolina, and Georgia. Officials expect further results from Georgia and Nevada by tomorrow at the latest.

The Biden campaign said early Wednesday that they saw their path to victory as winding through Nevada and the upper Midwest. With his wins in Arizona, Michigan and Wisconsin, Biden needs to carry any one of the three outstanding states where he currently has a reasonable shot at victory: Nevada or Pennsylvania, where his team says he is winning, or Georgia, which they say is a tossup. For Trump to win, he would have to carry them all.

Campaign staffers say the mood inside Team Biden is tense but optimistic, with top advisors saying the results are coming in largely as expected, and roughly on track with their internal polling. The campaign says they never expected to win by as wide of a margin as was reflected in national public polling, and that states like Florida and Texas were always considered a reach. Campaign staff always expected it would be a long process, as they would have to wait hours or even days for major states like Michigan, Wisconsin and Pennsylvania to be called.

“People just didn’t want to wait for it to happen how it was supposed to happen,” says one Biden senior advisor. “Everyone knew that Michigan, Pennsylvania and Wisconsin would not be called last night and somehow everyone, including the press, decided that it was some weakness in the Biden campaign.”

Democrats in Pennsylvania say they are optimistic Biden will come out on top in the Keystone state, but are also reassured that the Vice President has other paths to victory. “I think the math is on our side without a doubt,” says Pennsylvania Lieutenant Governor John Fetterman. “Nothing would make me happier if we were irrelevant. If Wisconsin, Michigan, Nevada drop, it’s ballgame.”

“I feel good about Pennsylvania,” Biden said. “Virtually all the remaining ballots to be counted were cast by mail, and we are winning 78% of the votes by mail in Pennsylvania.”

Throughout the day on Wednesday, the Biden team sought to manage expectations about which states it would win, and when those races would be called. “We have been abundantly clear that we thought that this could be a very close race in most of our states,” O’Malley Dillon also said during Wednesday morning’s briefing. “We worked hard to be very transparent about the fact that we did not believe that the race was in that wide margin that we were seeing in the national polling numbers.”

The campaign also addressed President Trump’s comments late Tuesday night, in which he falsely claiming victory and called for vote counting to stop. The campaign pledged to fight any legal challenge to counting absentee votes. “We’re winning the election, we’ve won the election, and we’re going to defend that election,” said Biden senior advisor Bob Bauer. “We don’t have to do anything but protect the rights of voters and to stand up for the democratic process. If it’s attacked, as the President suggests it will be attacked, we’re going to successfully repel that attack.”

“There will be no blue states or red states when we win, just the United States of America,” he concluded. 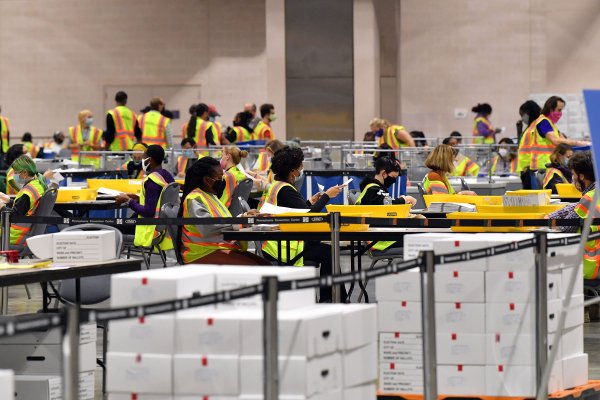 Here Are the States Biden or Trump Need to Win
Next Up: Editor's Pick