Don’t Assume Delayed Results Are Suspect. If Anything, It Means Officials Are Getting Them Right

Congratulations, America. You made it through a two-year presidential cycle that saw a record number of Democrats seek the nomination with unprecedented diversity. You evaluated the candidates while trying to navigate a pandemic, economic collapse and an overdue reckoning on race. Along the way, you’ve Zoomed into nominating conventions, participated in drive-in rallies, and endured record political advertising. More than 97 million of you have already voted. Your stress levels are through the roof.

Sorry to say, they may not be going down any time soon.

President Donald Trump has been shouting to his crowds that the country deserves to know who won by the end of Election Night. Anything else, he says, would suggest corrupted results and games. “The Election should end on November 3rd., not weeks later!” Trump tweeted on Oct. 30.

There’s a central flaw with this logic, and it’s a big one. The President didn’t win his current term on Election Day. The Associated Press didn’t call the race until 2:29 a.m. on Nov. 9. (We here at TIME will again be relying on the AP, my former employer of almost a decade.) Back in 2008, we didn’t know who won Missouri until Nov. 19. The state didn’t make a difference to Obama’s win, but officials in the Show Me state wanted to be shown more details about ballots.

As newsrooms around the country buckle in for tonight, there is an overwhelming urge to be cautious. The networks will be pumping their breaks before going up with anything approaching a flat declaration. Social media is going to be a mess; best to mute it for your mental health. There will be nothing like a 9 p.m. race call that we saw in 1996 during Bill Clinton’s re-election bid.

And, in all honesty, there probably shouldn’t be.

What we’re about to see is a once-a-century level of participation in American democracy. With such wide buy-in from U.S. voters comes the responsibility to make sure their ballots are cast. Getting every vote counted — even it takes awhile — doesn’t mean democracy has broken. It means it’s working.

As my TIME colleague Molly Ball writes in the current issue of the magazine, doom-scrolling an election actually undercuts this resurgence in civic action: “Hyping far-fetched scenarios has a pernicious effect: it erodes people’s confidence that their vote will count, dampening the shared trust essential to democracy.”

So as we settle in for what could be an unsatisfactory evening and a bumpy few days or even weeks, have some patience. No one is scrambling to scribble new ballots or commit voter fraud — which, while we’re at it, isn’t really a thing.

Instead, elections officials are working in overdrive to get this tally right. An otherwise truly terrible year has yielded one bright spot in this renaissance of democracy. Let’s not screw this one up, too. 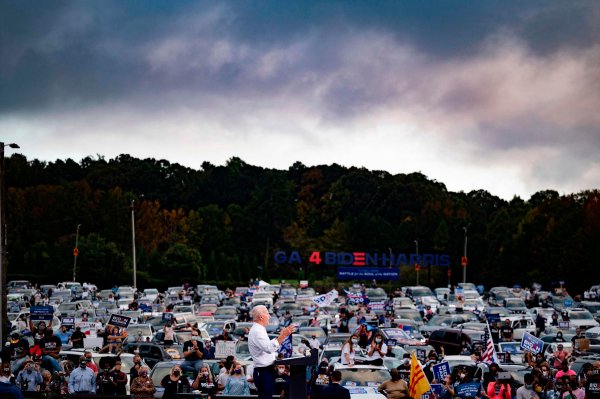 Why Republicans’ Red Wall Is More Like a Pink Curtain
Next Up: Editor's Pick