Over the last month, ever since the indictment of 13 men for plotting to kidnap the governor of Michigan, the word “militia” has appeared in thousands of newspaper headlines and TV news reports. The Detroit News: “Feds Say They Thwarted Militia Plot to Kidnap Whitmer.” NPR: “FBI Says Militia Plotted To Kidnap Michigan Governor.” ABC-12: “Militia Members Accused in Whitmer Kidnapping Face Life in Prison.” But all of these headlines are wrong, and almost every instance of the use of the word militia by journalists—as well as politicians and even law enforcement—has been wrong. Why? Because there is no such thing as a legal private paramilitary militia.

But don’t take it from me, here’s Mary McCord, a former Justice department official who is the legal director of the Institute for Constitutional Advocacy and Protection at Georgetown University: “The use of the word ‘militia,’ when you are talking about anything other than a state militia like the National Guard, is just wrong. Using that term without putting the world ‘unlawful’ in front of it suggests there is some constitutional authority or legitimacy for their existence, which there isn’t.”

Let’s say it again, and now let’s make sure that governors and state attorneys general and law enforcement pay attention: All 50 states prohibit private militias. They are illegal. Such organizations were banned starting with the Militia Act of 1903, and then amended by the National Defense Acts of 1920 and 1933. That legislation stated that all “able-bodied residents available to be called forth in defense of the state” were now members of the United States National Guard, which is part of the reserve components of the U.S. Army and Air Force. They are the militia. Period.

So, to the media, by all means use the word militia for the National Guard, but don’t use it for vigilante groups that go by the name Oathkeepers or III%ers or the Wolverine Watchmen or any other name. Call them what they are: gangs, extremist groups, criminals, even domestic terrorists. You can be sure that if these men in camouflage with guns were Black or Muslim, people wouldn’t be calling them militias. These groups use the name militia as a camouflage for their often violent and anti-democratic views. The term evokes the Minutemen of the Revolutionary War, citizen-soldiers who fought the British. But these guys are not heroes; they don’t deserve that historical cover.

In the middle of a national pandemic, in a nation riven by social justice protests, with historically high levels of unemployment, and with a contentious presidential election days away, we are at a moment that experts say is a perfect launchpad for acts of intimidation and violence by unlawful militias. “The threat level is pretty high,” says Jared Holt who monitors extremist groups at the Atlantic Council. According to the Southern Poverty Law Center, there are about 180 active anti-government paramilitary groups in the U.S, some claiming thousands of members, others having just a handful. Their numbers are growing.

For these unlawful militias, Election Day could become their Super Bowl. “Local officials, law enforcement, and voters,” says McCord, “need to know that groups of armed individuals have no legal authority under federal or state law to show up at voting locations claiming to protect or patrol the polls.” Sometimes law enforcement, says Holt, are sympathetic to these unlawful militias. These groups may say they are protecting the public, they may say they are there to help law enforcement—but they are not. They can and should be removed by legal authorities like, well, the actual state militia.

Oh, but doesn’t the 2nd Amendment protect them? Unlawful militias always cite the Second Amendment as providing the DNA of their founding and the justification for their continuation. This, too, is wrong. A “well-regulated Militia” in the words of the Second Amendment, means just that: it is regulated by the State. The Supreme Court, in 1886 and in the Heller decision of 2008 written by Justice Scalia, explicitly permits the states to prohibit “private paramilitary organizations.” And they do. There are plenty of constitutional debates about the Second Amendment—this is not one of them.

Nor does the First Amendment give them much protection either. The First Amendment’s provision of free speech and free assembly is not in conflict with the Second Amendment’s right to bear arms. Yes, burly white guys in camouflage can own guns, they can freely express their opinion that the federal government is going to confiscate their guns, they can “peacefully assemble” to protest that idea, they just can’t do so brandishing their guns and intimidating people, especially voters.

Who are these unlawful militias? They are, in the words of Barton Gellman in his seminal 2010 TIME cover on white extremist groups, “twisted patriots.” They are overwhelmingly white men who appropriate Revolutionary War imagery to cloak their anti-government views. What unites them is the idea that the federal government is tyrannical and will take away not only their guns but their rights. Many contend the 16th Amendment that created the federal income tax is unconstitutional. These groups mushroomed in 1990’s after the federal government launched sieges in Ruby Rudge, Idaho, and Waco, Texas. But their appeal dimmed after the 1995 Oklahoma City bombing, which killed 168 people.

The galvanizing event for the modern unlawful militia movement, according to Gellman’s story, was the election of the first Black president. Disinformation and conspiracy theories blossomed: Obama would declare martial law. Obama was going to confiscate all guns. Obama would usher in an international take-over of America. These groups saw Barack Obama not only as a Black man, but as a foreigner, an alien, un-American, and not of this country. This belief was aided and accelerated by the birther movement, whose primary promoter was none other than Donald J. Trump.

Trump’s role in the resurgence of unlawful militias is impossible to measure, but according to both Holt and McCabe, he is seen as a kindred spirit. A new study by the Armed Conflict Location & Event Data Project, a non-governmental research group, says “there has been a major realignment of militia movement in the U.S. from anti-federal government writ large to mostly supporting one candidate.” That candidate is Donald Trump. When Trump tweeted “LIBERATE MICHIGAN!”; when he said the Proud Boys should “stand back and stand by”; when he expressed sympathy for Kyle Rittenhouse, the 17-year old vigilante charged with killing two protesters in Kenosha; when he smiled as his supporters cheered “Lock her up” about Gov. Whitman—after the kidnapping plot was revealed—he is seen as an inspirational figure and a cheerleader for violence.

These groups have also been galvanized by the George Floyd protests, which is ironic. The George Floyd demonstrators are also protesting the tyranny of state power against a minority. But the narrative that seems to be motivating them now, according to Holt, is online disinformation about a violent “left-wing” response in the event of a Trump victory. In the case of a disputed election, Holt says, “their tone is one of readiness.”

With the election days away and a possible indeterminate or contested result, what can and should states do? It is a bedrock of our civil law that the government—and only the government—is able to legally and legitimately use force in the maintenance of public safety. Every state has some kind of provision in its constitution that allows it to prohibit paramilitary activity that leads to intimidation, violence, and chaos. Election intimidation is against the law. “Local authorities in all 50 states,” says McCord, “should know that the law empowers them to restrict paramilitary activity during public rallies and elections, while preserving the rights to free expression and peaceful assembly.”

They need to do so. That’s true law and order. 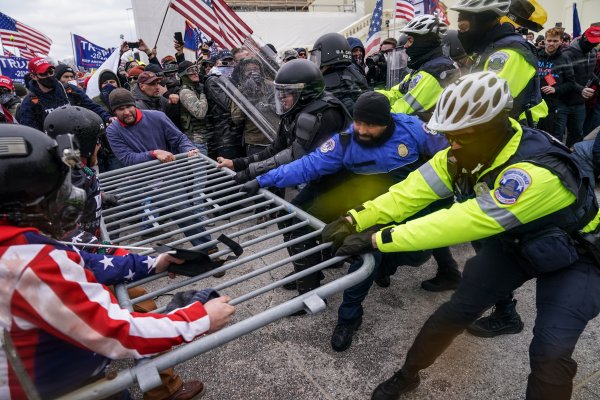 Man Charged in U.S. Capitol Riot Worked for the FBI: Lawyer
Next Up: Editor's Pick