Women Value Their Group Texts in Normal Times. During the Pandemic They've Become a Lifeline

When S got COVID, letting us know on a group text we had mostly used before to schedule dinners, we all texted her privately to tell her she’d be fine, to comfort her, to ask her how she was. You’re young and healthy, we said. We crowdsourced breathing exercises from doctors and advice from friends of friends and sent them to the group. But also, it was April in New York and there were sirens all day and night outside our windows. To one another, in a separate group, we texted questions. We commiserated over the fact that, really, we had no idea if she’d be fine.

There is something particular about right now that seems primed for the group text. It’s a group, first and foremost, when those feel mostly not allowed. Also, it’s low-impact: at a time when nearly every choice or utterance feels weighted, you can send a missive to the group without feeling like you’re placing too much pressure on a single friend. You can put off a text that comes in that feels too heavy in that moment, because you’re busy and stretched thin, because another group, another family member, needs your attention then, knowing there are others who can and will step in.

On another group, we traded access to different educational apps and programs that most of us never ended up using after the first weeks of remote school in March and April. Mostly after that we texted expletives. We texted memes of other angry, sometimes drunk, moms. J texted a picture of herself chugging wine straight from the bottle. C texted a photo of her 6-year-old, red-faced, yelling, prostrate on the floor. D texted us when her husband lost his job and I reached out when my husband got furloughed. We complained about our children, about our partners, about our government. We asked each other what the hell was going on.

All my group texts, except the one with my husband’s family (which I admittedly keep muted), are with women. I’ve spent my whole life as a writer interested in female spaces: kitchen tables, children’s birthday parties, living-room couches after the kids are in bed. So many of those spaces have disappeared as we’ve been forced into our homes and away from one another. We are, mostly women, spending whole days with our small children. We are working at odd hours. From 4 to 7 every morning. From 7 to 11 again at night. We are scared and we are exhausted and we are often by ourselves. We know better than to complain too much because no one besides the women like us seem to want to hear it. Because we are so privileged. Because there is no fixing the state we’re in right now.

When S got sick she was not able to get a test because the hospitals were overrun with other patients. When schools closed down, other people were not supposed to come into our homes, but no one had any idea how we were meant to parent and to do our jobs at once. We text one another because we know no one is going to come save us, because we’ve learned that the only resources we have are the ones we build amongst ourselves.

“I hate everything,” texts J when we get the third email from the school with the change of schedule. “I think I’m dying,” texts R, the second day of online class, having not slept in almost a week because of work. C texts from the yard of the school where our kids used to go every day. “I’m sobbing,” she says. “I cannot get a grip these last few weeks,” she says. Half an hour later I text a picture of my kids in the same schoolyard. They’re masked, on their scooters, making funny faces. We’ve come to get their supplies for remote learning. “I’m crying too now,” I text underneath. 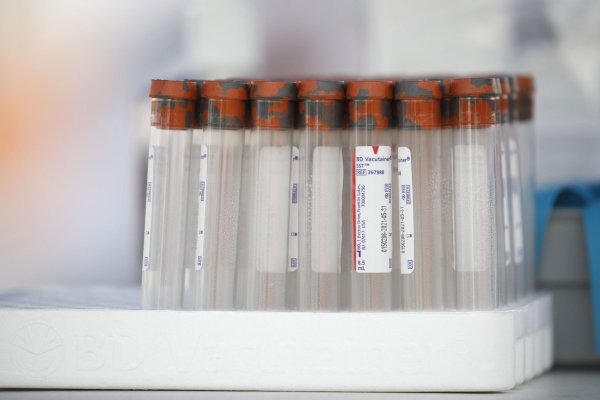 15-Minute Covid-19 Test Cleared in Europe
Next Up: Editor's Pick