Four dozen people in South Korea have died after recently receiving their seasonal flu shots, but health officials there say the deaths were not related to the vaccinations.

South Korean health officials found no direct link between the deaths and the flu shots and plan to continue the country’s immunization campaign to vaccinate people for free. “After reviewing death cases so far, it is not the time to suspend a flu vaccination program since vaccination is very crucial this year, considering … the COVID-19 outbreak,” Jeong Eun-Kyung, director of the Korea Disease Control Agency, said during a briefing.

This year, countries are more aggressively carrying out flu vaccinations, as one way to potentially mitigate the continuing effects of the COVID-19 pandemic. However, concerns about the deaths led health officials in Singapore to temporarily halt vaccinations with two flu vaccines in wide use there—one made by South Korean company SK Bioscience, and the other by the French multinational Sanofi—according to the South China Morning Post.

Each flu season in the U.S., the Centers for Disease Control (CDC) estimates that anywhere from 140,000 to 810,000 people are hospitalized for influenza, and up to 61,000 people die from the disease. Those rates would be considerably higher without the vaccines; studies have shown that flu shots can reduce the risk of serious disease and related hospitalization, which is especially important this year given the added burden COVID-19 is placing on the health care system. If fewer people need to go to the hospital for flu-related reasons, that provides more staff and resources to devote to caring for COVID-19 patients.

The national flu vaccine campaign in South Korea did experience early stumbles. In September, the government temporarily suspended immunizations due to cold-chain problems, and in early October, about 600,000 doses of vaccines from one manufacturer were recalled after contaminants were found in some of the vials. But health officials in South Korea said the recent deaths do not seem to be related to the vaccines themselves; they occurred among people receiving shots from seven different manufacturers, and in people who were older and experiencing other health conditions including heart disease. The average age of the people who died after getting vaccinated was 74.

Tracing deaths directly to the flu shot is trickier, but in the U.S., the CDC estimates that 1.31 cases of anaphylaxis occur for every 1 million doses, and an even smaller percentage of those result in deaths. Anaphylaxis is a severe reaction to the ingredients in the vaccine. Such reactions and deaths are extremely rare, however, and do not outweigh the benefits of the flu shot. 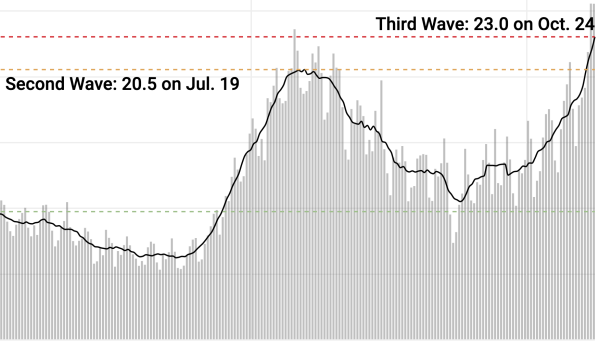 Third Wave of COVID-19 in U.S. Is the Worst
Next Up: Editor's Pick