Joe Biden holds up a mask as he speaks during the final presidential debate at Belmont University in Nashville.
Brendan Smialowski—AFP/Getty Images
By Abigail Abrams

President Donald Trump and former Vice President Joe Biden have starkly different visions for the future of health care in America, and during Thursday night’s debate they clashed over whose ideas would help more people. The catch? Only one of the candidates actually has a health care plan to talk about.

Trump began this portion of the debate by repeating his usual criticisms of the Affordable Care Act (ACA), also known as Obamacare. “I’d like to terminate Obamacare, come up with a brand new, beautiful health care,” the President said.

His administration is currently backing a challenge to the landmark health care law at the Supreme Court. If the high court overturns the ACA—an outcome that is more likely since Justice Ruth Bader Ginsburg died—more than 20 million people would lose their health insurance coverage.

As many as 133 million Americans who have pre-existing conditions could also be denied coverage or charged significantly higher premiums if the law were to be struck down, according to a 2017 analysis from the Department of Health and Human Services.

Trump tried to address this pressing issue for many voters by saying that “pre-existing conditions will always stay.” But Biden pushed back, correctly noting that Trump has not explained how he would do this. Republicans have been promising a replacement for former President Barack Obama’s signature health care law for a decade and have never come up with a comprehensive health care plan of their own.

When Trump ran for president in 2016, he too began saying he would propose a new health care plan. Despite continuing this refrain throughout his time in office and even holding an event touted as the unveiling of a plan last month, Trump has not offered any evidence that he would be able to prevent Americans from losing their health care coverage without the ACA.

Biden took the opportunity to plug his own health care plan, which he called “Bidencare” multiple times on stage, a sign that he is growing more confident in the popularity of the proposal. The former Vice President would boost the ACA’s subsidies to help more people buy health coverage and would create a government-run public option.

The idea of a public option for health insurance has gotten significantly more popular in recent months. A recent New York Times/Siena College poll found that 67% of likely voters support a public option, even more than the 55% who support Obamacare. As millions of Americans have lost their employer-based health insurance during the coronavirus pandemic, the idea of having another option may seem more appealing.

Biden said he views health care as a right, not a privilege—a line that echoes the ideas that Senators Bernie Sanders and Elizabeth Warren frequently advocated during the Democratic primary earlier this year. Biden also took a page from Sanders’ playbook when describing how his proposal would need to more cost money in order to help Americans save more on their premiums.

“The Bidencare proposal will in fact provide for that affordable health care, lower premiums. What we’re going to do is going to cost some money,” Biden said during the debate.

When Trump tried to accuse Biden of promoting socialized medicine, however, Biden explained that his plan does not eliminate private insurance and drew a clear distinction between himself and the more progressive candidates in his own party. “The reason I had such a fight with 20 candidates for the nomination was I support private insurance,” Biden said.

And in true Biden fashion, the former Vice President made sure to remind Trump that he is the one currently deciding the health care plan of the Democratic Party. 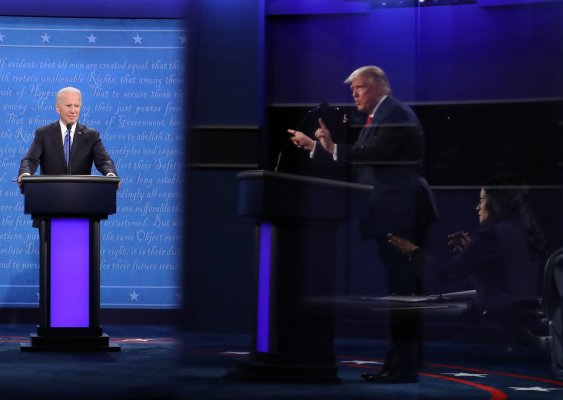 The Biggest Moments From the Final Debate
Next Up: Editor's Pick