The Biggest Moments in the Final Presidential Debate

One way or another, Donald Trump has taken the stage tonight for the last presidential debate of his political career.

The Republican incumbent met former Vice President Joe Biden on the campus of Belmont University in Nashville for the second and final televised debate of this election. The backdrop of a global pandemic, a sour economy and the ongoing national reckoning over racial injustice are all expected to take center stage as the pair of men in their 70s vie for the White House in the final days of an unprecedented election cycle. Trump has seen the campaign slip further from his grip as his campaign funds have dried up and poll numbers have gone south. Biden is coasting on a comfortable lead, even as his own campaign manager warns nothing is certain with a little more than a week of voting to go.

The mutual animosity between Trump and Biden is at levels unseen since George H.W. Bush and Michael Dukakis clashed in 1988. It was clear from the moment they stepped onto the stage in their first head-to-head on Sept. 29 that there is little, if any, respect between the rivals. Tonight’s debate was far more civil, due in no small part to the liberal use of mute on the candidates’ mics, but it still got heated as the evening progressed and Trump found his footing under the new rules.

Still, tonight’s debate isn’t likely to have had much persuasive value, even though the candidates covered far more policy ground than they did at their last meeting. Few voters are truly undecided at this point, and at least 40 million people have already cast their votes. Instead, both candidates worked to fire up their bases to get their supporters out to the polls. Trump has never been one to worry about winning such evenings on merits or minutiae anyway: for him, it’s all about the show. Even if he wins re-election, he won’t be eligible to run again. And should he lose, there’s little chance he’d ever match the more than 70 million viewers that tuned in for the last debate.

Here are the key moments from the event.

Is this thing on?

One of the first moments of interest in the debate was how organizers would enforce their rule that only the person being asked the question can speak. The new rule emerged after the chaos in Cleveland during the first debate, when candidates repeatedly interrupted his rival, though Trump took the interjections to a class far apart from anything previously seen.

For tonight, organizers said they would be making changes to enforce a format that opens each section with a question posed to one candidate, who then is supposed to get two minutes of uninterrupted time to answer. They have promised to mute the microphones of any cajoling candidate who is ignoring the rules during that time. Trump quickly called the effort a biased move designed to help Biden.

For the most part, though, the enforcement seemed to work relatively well. Both candidates appeared irked at times that they were unable to interrupt each other, expressions relayed through head shaking, laughs, and facial expressions that will inevitably become memes. But overall, while enforcing a microphone mute was an extreme measure, it was clearly a necessary one. The debate was undoubtedly more civil and substantive than the than the embarrassment that was Cleveland – even if that was a very low bar to clear.

Both candidates profess interest in the environment

Both Trump and Biden were quick to pledge to save the planet but they clashed strongly on the merits of clean-energy technologies and the need for conservation measures.

Trump disparaged wind and solar efficiencies and tried to cast Biden as a puppet of progressive star Alexandria Ocasio-Cortez, to which Biden cast his head upward and rolled his eyes. Trump said Biden would prefer buildings without windows or “little, tiny, small windows.” “I don’t know where he comes from,” Biden marveled.

Warning that the point of no return was near for the environment, Biden predicted millions of new jobs would come from a burgeoning green-energy industry. He also reminded the audience that Trump at one point suggested — wrongly — that windmills cause cancer. Trump later said the windmills kill birds, is too expensive and “the fumes coming up to make these massive windmills is more than anything that we’re talking about with natural gas.”

As they did in the first debate, they again clashed on fracking. And, once again, they had vastly different understandings of Biden’s position. “The oil industry pollutes. Significantly,” Biden said.

The fact that Trump is even worried about Texas and Oklahoma says more about the state of the race than any specifics on energy policy.

Welker: ‘We are talking about race right now’

Try as she might, moderator Kristen Welker could not keep the conversation focused on race in America. Trump tried instead to bring up reports of a laptop allegedly belonging to Hunter Biden that allegedly contains embarrassing messages and photographs. Biden mocked Trump’s self-comparison to Abraham Lincoln. “We are talking about race right now,” Welker reminded the candidates, but the two men kept shouting about their rivals’ records and ignoring questions from the moderator.

Trump has a problematic history on racial rhetoric and Biden was quick to highlight the President’s past statements. Trump responded by latching onto Biden’s work on the 1994 crime bill that now is seen as having a disproportionate impact on Black communities. It was clear both candidates had reviewed the briefing books of opposition research, but unless the viewers had Google at the ready, a lot of the shorthand would have sailed right past them. That said, most voters who identify racial reckoning and justice as their top issue probably do not have much confusion over how they’ll vote.

Trump professed ignorance over the Black Lives Matter movement, then said they were anti-police. He claimed credit for long-term funding for Historically Black Colleges and Universities and said he was friends with their leaders. He rightly noted that he championed the most significant rewrite of the criminal justice system in a generation.

For his part, Biden has acknowledged his errors in drafting the 1994 crime bill. He noted the nation’s prison population fell while he and Obama were in the White House. He then ran through a greatest-hits recount of Trump’s worst rhetorical attacks on minorities, leaving Trump with a declaration that would have been unimaginable from any other candidate: “I am the least person racist person in this room.”

What does a ‘much better’ healthcare plan look like? Trump didn’t say.

Nearly 30 million Americans did not have health insurance last year, and an estimated 12 million people lost their employer-sponsored health insurance due to the pandemic, according to research from the Economic Policy Institute. Trump and Biden have very different opinions on how to fix this problem.

Biden, who as Vice President helped shepherd the Affordable Care Act (ACA), or Obamacare, wants to create Public Option 2.0. His plan would give Americans the option of purchasing public health insurance, which would then provide competition for private health insurance rates, and hopefully drive down costs for everyone, without forcing anyone off their existing plans. “I support private insurance. Not one single person on private insurance would lose their insurance under my plan,” Biden said.

Trump, whose political party is waging a war against the Affordable Care Act in an upcoming Supreme Court case, says he would wipe out the ACA’s individual mandate, which requires Americans to have health insurance or pay fees, and swap it with a health plan that continues to protect pre-existing conditions. “What I would like to do is a much better healthcare, much better. It will always protect people with pre existing—so I’d like to terminate Obamacare, [and] come up with a brand new, beautiful healthcare [plan].” He offered scant details on what that plan would look like.

Biden: ‘I have not taken a single penny from any country whatsoever’

What started as a question about the recent acknowledgement that both Iran and Russia are trying to meddle in the upcoming elections quickly delved into a heated exchange over the candidates’ personal finances and Biden’s son Hunter.

After Biden questioned why Trump had not been tougher on Russian President Vladimir Putin, Trump alleged that Biden’s family had profited off business with China, which Biden flatly denied. “I have not taken a single penny from any country whatsoever,” he insisted.

The conversation inevitably segued into the topic Trump was intent on pursuing: Hunter’s work on the Ukrainian board of the gas company Burisma. Trump and his associates have been trying to argue for months that Hunter’s work there, which came at the same time Biden was overseeing Ukraine policy as Vice President, is evidence that Biden acted improperly, though there has been no evidence to affirm that.

Biden reiterated, as he has in the past, that nothing was unethical about Hunter’s work, and cited the testimony of U.S. officials during Trump’s impeachment hearings last year who repeatedly said he never acted improperly as Vice President.

Biden ultimately halted the back and forth, arguing that the minutiae of both candidates’ familial finances was irrelevant to most of the voters watching. And on that, he was probably correct.

It didn’t take long for the candidates to be at odds with one another. In response to Kristen Welker’s first question of the night, regarding how the nominees would lead the country in the next stage of the coronavirus pandemic, Trump and Biden couldn’t sound more different.

Trump, who recently recovered from a COVID-19 diagnosis and related hospital stay, implied the virus wasn’t something for major concern. “We’re rounding the turn, we’re rounding the corner, it’s going away,” Trump said, despite the fact that his CDC Deputy Director for infectious diseases, Jay Butler, warned just this week that “we are seeing a distressing trend [in COVID-19 cases] here in the United States.”

Biden disagreed vehemently. “220,000 Americans dead,” Biden said. “Anyone who’s responsible for that many deaths should not remain as President of the United States of America.”

“The expectation is we’ll have another two hundred thousand Americans dead by the end of the year,” Biden went on.

That number may sound jarring, but it’s in line with what Trump’s top infectious disease official said could happen if Americans didn’t practice precautionary steps like wearing masks and social distancing. “The models tell us that if we do not do the kinds of things that we’re talking about in the cold of the fall and the winter, we could have from 300,000 to 400,000 deaths. That would be just so tragic, if that happens,” Dr. Anthony Fauci said earlier this month.

Joe Biden holds up a mask as he speaks during the final presidential debate at Belmont University in Nashville on Oct. 22, 2020.
Brendan Smialowski—AFP/Getty Images
More Must-Read Stories From TIME

Write to Philip Elliott at philip.elliott@time.com, Alana Abramson at Alana.Abramson@time.com and Abby Vesoulis at abby.vesoulis@time.com. 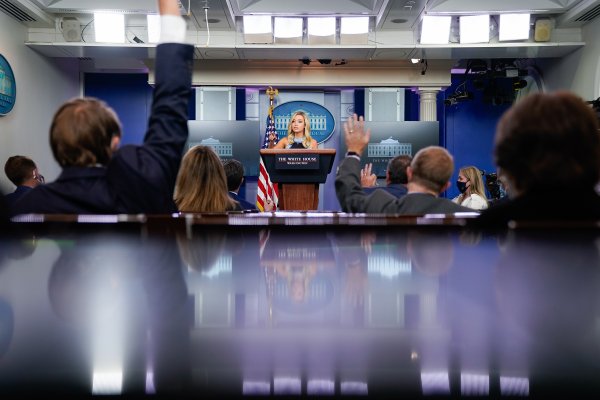 How Republicans Are Selling Voter Fraud Myths
Next Up: Editor's Pick