Most Muslim Voters Don't Like Donald Trump. But Has Joe Biden Done Enough to Earn Their Votes?

Nusaiba Mubarak isn’t the biggest fan of Joe Biden, but she’s putting her heart into getting every last Muslim voter to cast a ballot for him anyway. “I’m not satisfied with the Democratic candidate,” she says. “But I’m doing everything I can to get Trump out of office.”

Mubarak, who is Muslim, isn’t alone in her sentiments. A recent CAIR poll found that just 18% of Muslim voters support Donald Trump, while 71% say they back Biden. But that disparity hardly guarantees that Muslims will vote for Biden in droves: the former Vice President will only benefit from his opponent’s dismal popularity if he can convince Muslim voters, some of whom feel disengaged by the Biden campaign, to go through the trouble of casting a ballot.

Turn-out matters: while Muslim Americans make up just about 1% of the U.S. population, the community carries outsized weight in several swing states, including Florida, Ohio, Virginia, Wisconsin, Pennsylvania and, of course Michigan, where Trump won by less than 11,000 votes in 2016. He hosted a campaign rally in Lansing, Mich., on Tuesday.

On issues that are important to the Muslim community, there’s no real comparison between the two major candidates. Trump has routinely used Islamophobic rhetoric; championed the so-called Muslim ban, which blocks entry to the U.S. for immigrants and refugees from some Muslim-majority countries; and backed a host of federal policies, including sweeping surveillance programs that disproportionately harm Muslim Americans.

Biden, in contrast, has not actively antagonized most Muslim voters so much as failed to convince them to rally behind him, Mubarak says. Biden has pledged to revoke the Muslim ban on his first day in office; promised that a Biden Administration “will look like America, with Muslim Americans serving at every level”; and has published policy agendas targeted at helping the Muslim-American and Arab-American communities. While such campaign promises are not enough, says Mubarak, she urges her fellow Muslims not to discount the “breadcrumbs”: “It is the first time that we really have a seat at the table,” she says.

Avoiding a second Trump term, says Mubarak, who leads a voter mobilization team at MoveOn.org, means—at least in part—turning out Muslim voters in key swing districts. And that requires a two-step process: reminding Muslim Americans of the stakes of a second Trump term and giving them good reason to bother showing up at the polls. That second factor, she says, is a key part of her mission between now and Nov. 3.

A community ‘worth their while’

Historically, neither Democrats nor Republicans have spent much time reaching out to the Muslim community because it’s so small. “Political campaigns have never seen that community as worth their while,” says Youssef Chouhoud, an assistant professor of political science at Christopher Newport University. But in recent years, that calculus is starting to shift.

One reason is demographics: while a large number of Muslim Americans immigrated after the 1965 Immigration and Nationality Act, which lowered barriers to immigration from Asia, Africa and other regions outside Europe, their children are often American-born. Those who are just coming of voting age have had a very different experience of America. Many only know a post-9/11 world. “They’re adults now and they’ve known nothing but attacks on their community,” says Abed Ayoub, director of the Arab American Anti Discrimination Committee, a civil rights organization.

Another reason is an uptick in political engagement nationwide—which has partly been a response to President Trump’s Islamophobic rhetoric and policies, experts say. In the battleground states of Florida, Ohio, Michigan, and Virginia, Muslim voter turnout jumped 25% from the 2014 to 2018 midterm elections, from 130,000 votes to more than 285,000, according to Emgage, a Muslim American civic engagement group. Muslim voter outreach efforts are growing, too. In 2015, for example, the Georgia Muslim Voter Project was founded “in response to the Islamophobic rhetoric coming out of the presidential race at the time,” coupled with relatively low turnout among Muslim Americans, says the organization’s executive director, Umer Rupani.

In recent years, Muslim Americans have also successfully run for elected office at nearly every level of government. In 2018, Reps. Rashida and Tlaib and Ilhan Omar became the first Muslim women elected to the U.S. Congress, and in 2019, Virginia state senator Ghazala Hashmi became the first Muslim American elected to that state’s senate. Hashmi says she ran directly in response to the “Trump administration’s attacks on the Muslim community.” (She is now a co-chair of the Asian American and Pacific Islanders for Biden Leadership Council in Virginia, working to help turn out Muslim votes for Biden.)

The issues that are important to Muslim voters have also shifted. Before 9/11, most Muslim Americans engaged with American politics largely through the lens of foreign policy, particularly with regard to Israel and Palestine, Chouhoud says. But an August CAIR poll found that civil rights, followed by healthcare, were the most pressing priorities for Muslim Americans. Foreign policy trailed behind them. In fact, More than 60% of Muslim Americans support a single payer health care system like the Medicare for All plan touted by Bernie Sanders, according to a CAIR poll from March. (Sanders was popular across the Muslim community not only for his domestic politics but also for being an outspoken supporter of Palestinian human rights, frequently speaking at Muslim events and hiring a Muslim American campaign manager.)

Racial identity—especially at this fraught moment in American politics—also plays a role in shaping Muslim voters’ political attitudes, says Chouhoud. About 60% of Muslim adults are immigrants and roughly a fifth identify as Black, according to Pew. While roughly 50% of Muslims who identify as white approve of Trump’s job performance—on par with white Americans in general—only 21% of Arab Muslims and 20% of Black Muslims do, according to a 2020 American Muslim Poll conducted by the Institute for Social Policy and Understanding (ISPU), a nonprofit that uses research to advocate for Muslim Americans. (Chouhoud, also an ISPU fellow, helped with data analysis on the poll.) Roughly 60% of Muslims also report experiencing religious discrimination, especially in interactions with law enforcement, according to the ISPU poll.

While the Biden campaign’s outreach to the Muslim community has not been as substantive as many organizers and activists, including Mubarak, would have liked, many Biden backers tout the effort. Farooq Mitha, Biden’s senior advisor for Muslim engagement, says the campaign has held more than 150 events with Muslim communities and rolled out a future Biden Administration agenda that includes policies that Muslim voters may cheer. For example, the campaign has committed to ending the Targeted Violence and Terrorism Prevention Program that civil rights advocates say unfairly targets Muslims. Mubarak says that commitment came after she, along with a group of former Muslims for Bernie, fought for it. (Mubarak previously worked as the national Muslim and Arab-American organizer for the Sanders campaign.)

The Brennan Center for Justice says Biden’s campaign promises are “modest in terms of specifics” but “signal something of a shift towards recognizing that our counterterrorism laws and policies systematically target and discriminate against some Americans.” Biden’s colloquial use in the first Presidential debate of the term “inshallah,” which means God-willing, was also welcomed as a light-hearted, if insubstantial, attempt at connection with Muslim Americans.

But it hasn’t been all smooth sailing for the Biden team. The campaign’s first hire overseeing Muslim voter outreach was Amit Jani, who led the Asian Americans and Pacific Islanders (AAPI) coalition. Jani’s appointment sparked controversy after reports surfaced that he supported the Hindu nationalist BJP party in India, which openly discriminates against Muslims. (Mitha became the campaign’s senior adviser for Muslim engagement in March; Jani remains on the Biden campaign as the AAPI director.)

In August, the Biden team again alienated some Muslim voters when a campaign spokesperson said Biden “condemns” the views of Palestinian-American activist and former Sanders surrogate Linda Sarsour, after she spoke at a a Democratic National Committee event. Sarsour had said, “The Democratic Party is not perfect, but it is absolutely our party in this moment.” Sarsour has previously been outspoken in her support for a boycott, divestment and sanctions against Israel. Several national Muslim organizations issued statements expressing their disappointment in the Biden campaign, which later privately apologized to activists, according to the Middle East Eye.

Some Muslim activists have also expressed concern about Biden’s position on Israel and Palestine, an issue of deep importance to most Muslim voters, says Palestinian-American activist and former Sanders surrogate Amer Zahr. Biden, for example, has refused to commit to tying U.S. aid to Israel to the country’s compliance with international law. He has also said he would not return the U.S. embassy to Tel Aviv, after Trump moved it to Jerusalem in May 2018. Biden has, however, said that he opposes Israeli settlement expansion.

Zahr says that although doesn’t agree with Biden on many issues, he plans to vote for him. He notes that under Islamic law, Muslims are allowed to eat pork when faced with extreme hunger but when normalcy returns, the prohibition is back in effect. He says, “The 15 minutes I’ll take to vote for Biden is like eating the unavoidable ham; Trump is hunger and starvation.”

A participant holds a campaign sign for Biden during the first-in-the-nation Iowa caucus in Des Moines.
Elijah Nouvelage—Bloomberg/Getty Images

The Biden campaign’s association with Emgage, the civic advocacy group, has also sparked some disagreement. (Mitha, Biden’s outreach coordinator, is a former co-founder of Emgage.) Emgage has been an engine for the get-out-vote effort in swing states. The organization says that more than 439,000 Muslims contacted by them and their partners and affiliates have already cast their ballot. In Michigan alone, more than 40,000 of the Michigan Muslims its organizers and partners have contacted have already voted, the group says. (That’s more than three times as many voters that decided the race back in 2016.)

But some critics accuse Emgage of collaborating with organizations that have engaged in “anti-Palestinian activity.” Emgage denies the accusations. But the discussion has nonetheless dominated Muslim voters’ social media feeds and led a coalition of major Muslim organizations—the U.S. Council of Muslim Organizations (USCMO)—to sever ties with Emgage, which also withdrew its membership from USCMO.

“The extreme pro-Israel stances, then the attack on Linda [Sarsour—[the Biden Campaign] makes it harder and harder for me everyday to organize my community,” Mubarak says.

But the fact that Biden as a candidate is far from perfect, in her eyes, isn’t dissuading her from helping him win. She says the question at stake this election is both immense and crystal clear: either Trump is the President for the next four years, or he’s not. In 2016, Mubarak says, she was not happy with Democratic candidate Hillary Clinton and “made the mistake of voting third party.” This year, she says, she’s not going to repeat the error by skipping a vote for Biden.

“You don’t want to live with that kind of regret,” she tweeted last week. “For God’s sake, I’m begging you. Help me get him out of office.” 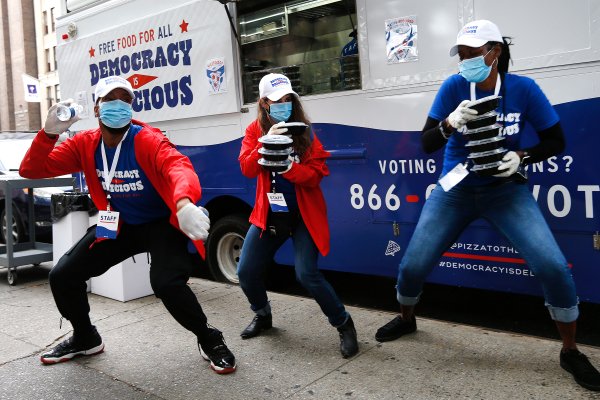