Amy Coney Barrett answered questions from senators publicly for the first time on Tuesday, and she was asked about some of the most contentious issues in American life.

Barrett was pressed on her views on subjects including abortion, health care, gun rights and racism during the lengthy session before the Senate Judiciary Committee on Oct. 13. While she declined to give specific judgments on most of the hot-button topics, her answers helped clarify her judicial philosophy and revealed some of her personal views.

Each senator on the committee had 30 minutes for questioning on Tuesday, the longest time they will have to publicly question the woman who appears to be on her way to a lifetime appointment on the Supreme Court. Barrett’s confirmation, which is highly likely given the Republican majority in the Senate, would cement a 6-3 conservative majority on the Supreme Court for a generation.

While many senators and Barrett herself referenced Barrett’s ideological similarities to her mentor, the late Justice Antonin Scalia, Barrett said, “If I’m confirmed, you would not be getting Justice Scalia. You’d be getting Justice Barrett.”

Here’s what we learned about a potential Justice Barrett’s views on these key topics.

Barrett was repeatedly pressed on her views of abortion and whether she thinks landmark abortion decision Roe v. Wade was wrongly decided. Barrett did not take a position on Roe or other abortion precedent. She said to California Sen. Dianne Feinstein that she knows abortion is “a contentious issue” but told the committee’s top Democrat that it would be inappropriate for her to express an opinion on the precedent. But, she said, “I don’t have any agenda. I have no agenda to try to overrule Casey.” (Planned Parenthood v. Casey was a Supreme Court decision that upheld the right to an abortion found in Roe, and crafted a standard for how to evaluate restrictions on abortion.)

Barrett told Minnesota Sen. Amy Klobuchar that she does not consider Roe v. Wade to be “super-precedent,” or one of the rarified cases that, as she put it, “everyone has accepted” like Brown v. Board of Education, which outlawed racial segregation in schools. “Roe is not a super-precedent because calls for its overruling have never ceased,” Barrett said. “But that doesn’t mean that Roe should be overruled.”

Barrett is Catholic, and she did acknowledge to Vermont Sen. Patrick Leahy that she has previously expressed personal views on the issue. She said she signed a statement in 2006 “on the way out of church” that she said “was consistent with the views of my church and it simply said, we support the right to life from conception to natural death.”

But she said her personal views would not affect how she approaches cases. “For any issue that comes up, abortion or anything else, I’ll follow the law,” Barrett said.

With the Supreme Court set to hear a case about the constitutionality of the Affordable Care Act (ACA) just one week after Election Day, Democrats have made health care a major focus of Barrett’s hearing. In particular, they asked her about a 2017 article she wrote that criticized Chief Justice John Roberts’ 2012 decision upholding a key provision of the Obama-era health care law. “Chief Justice Roberts pushed the Affordable Care Act beyond its plausible meaning to save the statute,” she wrote. (She clarified to Klobuchar that she wasn’t criticizing Roberts himself in that piece: “I don’t attack people, just ideas,” she said.)

Barrett explained that the issues raised in the upcoming Supreme Court case, California v. Texas, are different from the ones the court ruled on in 2012, so, she argued, her 2017 comments aren’t relevant to how she would approach the new case if she’s confirmed to the Supreme Court before then.

Barrett was asked about racial issues in various ways on Tuesday, both for her legal views and personal ones.

On the Seventh Circuit, Barrett voted not to hear an appeal by the Equal Employment Opportunity Commission in a case where it argued AutoZone had violated the Civil Rights Act by using race as a factor to assign employees to different stores. The three judges who wanted to hear the appeal called it a “separate-but-equal arrangement.” Feinstein asked Barrett about her vote and what would constitute an unconstitutional “separate but equal” standard under Brown v. Board of Education. Barrett wouldn’t engage on the merits of the AutoZone case, so Feinstein then asked, “As a person, do you have a general belief?”

“As a person, I have a general belief that racism is abhorrent,” Barrett replied.

Later, questioning by Durbin yielded one of Barrett’s most personal and emotional answers of the day. Durbin asked Barrett whether she had watched the video of George Floyd being killed by a white police officer kneeling on his neck, and how that video had affected her. “As you might imagine, given that I have two Black children, that was very, very personal for my family,” Barrett said. (Two of her seven children are adopted from Haiti.) Barrett said she “wept” over the incident with her Black daughter.

Barrett said it was “obvious” that “racism persists in our country.” But, she said, “giving broader statements or making broader diagnoses about the problem of racism is kind of beyond what I am capable of doing as a judge.”

Barrett wrote a dissent on the Seventh Circuit Court of Appeals in 2019’s Kanter v. Barr in which she argued that the government can’t strip all felons of their right to own guns, only those who have shown to be dangerous. This has led people on both sides of the aisle to conclude Barrett takes a muscular view of the Second Amendment.

On Tuesday, Barrett signaled a willingness to regulate gun ownership in certain instances. “Heller leaves room for gun regulations,” Barrett said, referencing District of Columbia v. Heller, which upheld an individual right to bear arms under the Second Amendment. She offered one example in particular, saying that in her view, the Second Amendment supports the government’s right to keep guns away from dangerous people, including “the mentally ill.”

When asked by South Carolina Sen. Lindsey Graham, the chairman of the committee, Barrett said she owns a gun.

The Supreme Court may need to adjudicate election-related questions before the year is out. President Donald Trump has previously suggested delaying the November presidential election, and he’s already said he thinks the Supreme Court will need to look at voting issues, suggesting without evidence that the election will be a “fraud.”

When asked if Trump could delay the election, Barrett said she “would need to hear arguments from the litigants, and read briefs and consult with my law clerks, and talk to my colleagues, and go through the opinion writing process.” She added: “If I give off-the cuff answers, then I would be basically a legal pundit.”

Barrett did not say, when asked multiple times, whether she would recuse herself from any election-related cases. But she said on the Affordable Care Act or any possible election cases, she has “had no conversation with the President or any of his staff on how I might rule.” She said she has made no “pre-commitments” on election questions or other cases.

In a discussion with Delaware Sen. Chris Coons, she said, “I certainly hope that all members of the committee have more confidence in my integrity than to think that I would allow myself to be used as a pawn to decide this election for the American people.”

When Booker asked her if U.S. presidents should commit to peaceful transfers of power, Barrett suggested the question was leading her to comment on Trump, who has refused to do so. “To the extent that this is a political controversy right now, as a judge, I want to stay out of it,” Barrett said. When pressed, Barrett continued, “One of the beauties of America from the beginning of the republic is that we have had peaceful transfers of power, and that disappointed voters have accepted the new leaders that come into office.”

Barrett says she does not think it is likely the Supreme Court would overturn the nationwide right to same-sex marriage. When asked about 2015’s Obergefell v. Hodges, Barrett did not express her own view of the precedent, but said, “If [a state] outlawed same-sex marriage, there would have to be a case challenging it. And for the Supreme Court to take it up, you’d have to have lower courts going along and say, ‘We’re going to flout Obergefell.‘”

She said: “The most likely result would be that lower courts, who are bound by Obergefell, would shut such a lawsuit down and it wouldn’t make its way up to the Supreme Court.”

Barrett also said, “I have never discriminated on the basis of sexual preference and would not ever discriminate on the basis of sexual preference.” Later, Hawaii Sen. Mazie Hirono and Booker both challenged Barrett on her use of the term “sexual preference,” as opposed to “sexual orientation.” “I certainly didn’t mean and would never mean to use a term that would cause any offense in the LGBTQ community,” Barrett said. “If I did, I greatly apologize for that.” She clarified that by using the term, she “did not mean to imply” that sexual orientation is “not an immutable characteristic or that it’s solely a matter of preference.”

Barrett identifies as an originalist and a textualist in how she interprets the law— ideologies she shares with Scalia.

She explained her view of what that means at the beginning of the day on Tuesday: “I interpret the Constitution as a law, that I interpret its text as text, and I understand it to have the meaning that it had at the time people ratified it,” she said. “That meaning doesn’t change over time and it’s not up to me to update it or infuse my own policy views into it.” But she also noted that originalists and textualists can still disagree in their decisions, and people shouldn’t assume she agrees with all of Scalia’s decisions or would decide every case the same way he would.

She also said that she would not let her personal views on any issue— whether it be abortion or anything else—influence her judicial rulings. “I have a life brimming with people who have made different choices, and I have never tried, in my personal life, to impose my choices on them,” she said. “And the same is true professionally.” 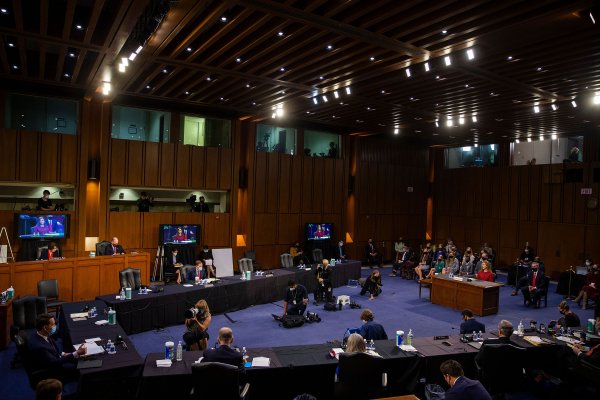