'Mr. Vice President, I'm Speaking.' What Research Says About Men Interrupting Women—And How to Stop It

Vice President Mike Pence interrupted Harris, the Democratic nominee for his current job, a total of ten times over the course of the event, double the times that Harris interrupted him. Pence also repeatedly objected to moderator Susan Page’s attempts to enforce his speaking-time limit. Within minutes of Pence’s first interruption, it was clear on social media that many women had experienced in their own lives exactly what Harris was going through on a national stage. Platforms like Twitter soon flooded with responses from women who recognized what it was like to have a man speak over them.

In fact, studies confirm that the phenomenon is widespread—but also that it should be possible, if not easy, to limit its impact.

Many women who were watching the debate, including CNN chief political analyst Gloria Borger, who herself was interrupted that night by her male counterparts at a post-debate panel, found the dynamic frustrating and familiar. Nor was it the first time Harris has encountered this kind of treatment from male counterparts while doing her job. She was notably cut off twice by Republican senators during a 2017 Senate Intelligence Committee hearing.

Pence’s interruptions at the debate, however, were seen by many as a particularly obvious example of the way gender and interruption often interact, especially in the workplace, something that was noted by Democratic Congresswoman Alexandria Ocasio-Cortez on Twitter.

The gender imbalance isn’t random, says Tali Mendelberg, a politics professor at Princeton and the author of The Silent Sex: Gender, Deliberation, and Institutions, and men who interrupt in a competitive setting like a debate may do so for what they perceive as a good reason.

“Men are often socialized to display dominance in competitive public settings like debates and interrupting is a power move,” Mendelberg tells TIME in an email. “When Pence interrupted, he created power for himself at the expense of Harris.”

In the case of Pence, while his tone and delivery toward Harris may have been different than, say, Donald Trump’s more brazen interruptions of Hillary Clinton during the 2016 Presidential debates, Mendelberg says the same factors are in play.

“Pence’s calm tone and civil words may have made his many interruptions and repeatedly talking past his time seem not so bad,” Mendelberg says. “But it will be familiar to many women who sit in meetings with men who may not share speaking time equally. In our research, all-female groups discussing politics take equal speaking turns and avoid negative interruptions. When you add in men, they [men] tend to take more than their equal share.”

Research studying why men routinely interrupt women goes back as early as 1975, with a study conducted by Don Zimmerman and Candace West at UC Santa Barbara, where they found that out of 31 observed mixed-sex conversations, men were responsible for 47 of the 48 interruptions that took place. A 2014 study from George Washington University found that men were 33% more likely to interrupt while speaking with a woman, as opposed to another man. And more recently, a 2017 report from Northwestern Pritzker School of Law showed that male Supreme Court Justices interrupt female Justices approximately three times as often as they do other male Justices. All three studies note that these interruptions can be traced to possible unconscious bias, which affects who we think is powerful or high-status enough to not be interrupted.

Even when women do speak up, they tend to do so in ways that don’t erase the discrepancy. In Northwestern’s 2017 study, researchers observed that when female justices began their tenures, they framed their questions more politely, using phrases like “may I” and “excuse me”—which gave male justices the opportunity to speak over them. The study found that the majority of female justices eventually pulled back on using polite speech to stand up to their male counterparts. (Sandra Day O’Connor and Ruth Bader Ginsburg both decreased their use of polite phrasing by two-thirds over the course of their careers.)

In Harris’ case, the fact that she was the first Black and South Asian woman to appear on the debate stage made the politeness of her refrain to Pence all the more significant to many observers.

But, other than making use of Harris’ phrasing, is there a way this inequality could be adjusted?

Mendelberg notes that in her research there was one exception to the rule that men interrupt and talk more than their fair share: when they perceive that the women in the room are of equal status to the men. By the same logic, frequent interruptions can be read as a sign of a man believing that his status is higher. That assumption can be fought by acknowledging unconscious bias and committing to correcting it, which includes calling out behavior that reinforces this bias. In other words, though individual women may develop their own tactics to respond to interruptions as they happen, change that would reduce the disparity would have to happen on a broader level. Writer Jessica Bennett, the author of Feminist Fight Club: An Office Survival Manual for a Sexist Workplace, outlined in a 2015 TIME column that “manterrupting” can only be fixed with a conscious realization of gender bias and establishment of boundaries that explicitly ban interrupting.

When it came to Wednesday’s debate, that means there would have needed to be stronger reinforcement of the rules against interrupting and taking unequal time—something that this year’s political debates have shown is easier said than done.

“Rules can help, but they have to be enforced,” Mendelberg says. “Otherwise, it’s a free-for-all that advantages men.”

Even so, it can be worthwhile to try, as interruptions can be detrimental to progress, whether the setting is a televised debate or a corporate boardroom. It’s something that Harris herself pointed out, if inadvertently. In one particularly memorable moment of the night, Pence attempted to interrupt Harris’ rejoinder to his claim that Joe Biden would raise taxes (Harris for her part, reiterated that Biden would not raise taxes for anyone who made under $400,000).

“Mr. Vice President, I’m speaking,” Harris said. “If you don’t mind letting me finish, we can then have a conversation, O.K.?” 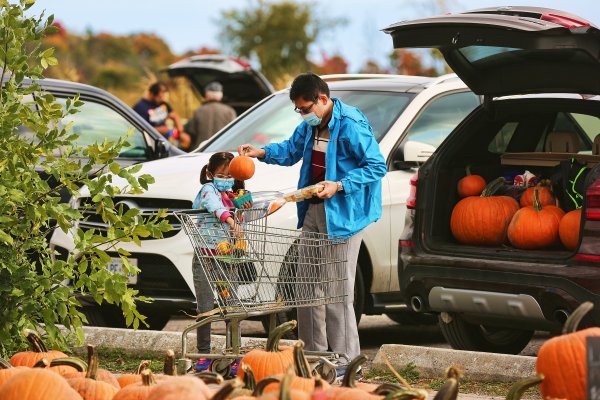 A Candy Slide. Virtual Costume Contests. Indoor Trick-or-Treating. How Some Families Are Planning for a Pandemic-Proof Halloween
Next Up: Editor's Pick