A Candy Slide. Virtual Costume Contests. Indoor Trick-or-Treating. How Some Families Are Planning for a Pandemic-Proof Halloween

People wearing face masks to protect them from the COVID-19 select pumpkins for Halloween at a farm in Markham, Ontario, on Oct. 03
Creative Touch Imaging Ltd/NurPhoto/Getty Images
By Cady Lang

For Jaimie Nakae-Grenier and Jay Grenier, Halloween is a major production. The couple’s Austin home often draws crowds that line up around the block, and they have a YouTube channel, Wicked Makers, that shows how to make Halloween props. This year, however, their normally interactive decorations will be designed to be seen from afar. And kids in the neighborhood will get treats via a “candy slide,” a structure that uses a 6-ft. PVC pipe to deliver candy without contact (their video explaining how to build one has netted nearly 300,000 views).

The Greniers are one of many families rethinking Halloween traditions this year. Some cities are canceling parades and events, while others are instituting health and safety regulations. The Centers for Disease Control and Prevention (CDC) considers door-to-door trick-or-treating and “trunk-or-treating” (where kids get candy from trunks of cars in parking lots) as “higher risk.” Likewise indoor haunted houses or costume parties and hayrides with people not in your household. Make-believe frights become a little too real when, as the agency warns, screaming increases the risk of spreading the virus.

But this doesn’t mean kids have to miss out on spooky celebrations (or bags full of candy). “It’s definitely going to be a different Halloween, but it’s been a fun challenge to look at it from that perspective,” Jay Grenier says. “The creativity that you have by celebrating the season is not going anywhere.”

Lori Bergamotto, style director at Good Housekeeping and a Halloween enthusiast, says parents should look to outdoor, lower-risk activities, especially ones recommended by the CDC, such as socially distanced outdoor movie nights, decorating pumpkins outside or virtual costume contests. “As parents, it’s really important for us to remain positive,” says Bergamotto, who is eight months pregnant with her third child. “It’s all about reframing it in a way where it’s not canceled, but instead, here’s an awesome way we can celebrate.” Her family will place carved pumpkins 6 ft. apart on the lawn of her Mamaroneck, N.Y., home. Each pumpkin will hold an individual treat bag full of candy, which can then be replenished. Instead of a costume party, Bergamotto is also organizing a “dress up from the neck up” Zoom call with her extended family, where they’ll don fancy headwear, accessories and makeup.

Because of the pandemic, Erin Dunphy Rickel, a production coordinator in Burlington, Conn., will get to spend Halloween with her 2½-year-old nephew, who’s visiting from Florida. She’s put together a full agenda of safe activities, including indoor trick-or-treating, in which each adult will stand behind a door in a room or closet, giving her nephew the experience of knocking and asking for candy. They’ll also paint pumpkins outside and have a family-only parade in the driveway, in place of the one he would have had at school. “While it can feel a little sad that it’s not a normal Halloween, I’d rather be safe and create some special memories that are different than run the risk doing the same things,” Dunphy Rickel says.

Leyla Momeny, a teacher in San Francisco, notes it’s probably just one Halloween. She’s planned a night hike with a scavenger hunt for her two children and another family where the kids will search for candy with flashlights. “Kids are generally pretty resilient,” she says. “I’m hoping that I can be empathetic to their loss here while also modeling joy and eagerness toward a new experience. Besides, what’s spookier than the woods at night?” 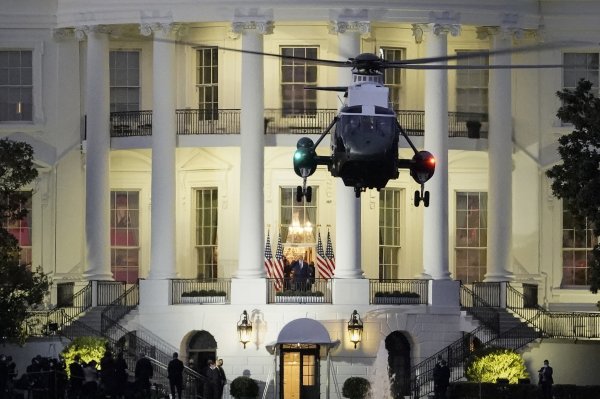 As Donald Trump Heads Back to Work in the Oval Office, His Colleagues Face 'A Dangerous Moment'
Next Up: Editor's Pick