President Trump Is Using His Anti-Mueller Playbook on Woodward

The two men are veterans of the Washington Establishment, respected by members of both parties for their skill at sussing out hard-won facts. Their personal backgrounds are even similar: Woodward, a Yale grad and Navy vet who has spent his career at the Washington Post; Mueller, a Princeton grad and former Marine who is dedicated to the FBI.

And the fruits of their investigations — an upcoming book for Woodward, a series of guilty pleas and court verdicts for Mueller — are particularly damning for Trump.

In responding to Woodward’s book, “Fear: Trump in the White House,” which comes out on Sept. 11, Trump has echoed his 15-month attack on the Special Counsel’s investigation and may be foreshadowing his next moves. There were denials from loyal aides. A volley of counter accusations that Woodward made up parts of his book. Even an allegation — offered without evidence — that Woodward might be a Democratic Party operative.

Even before Woodward’s book became a topic of discussion, Trump began his counterattack, expanding his usual criticism of the media last week to include “fake books” which use anonymous sources and are “pure fiction.” (It is an argument he’s previously used to attack Michael Wolff’s controversial “Fire and Fury.”)

On Tuesday, initial reports based on early copies of the book obtained by the Post and CNN came out, with juicy details about Trump staffers taking documents off his desk to keep him from signing them, Trump calling Attorney General Jeff Sessions “mentally retarded” and a “dumb Southerner” and members of his staff calling him a “liar” and an “idiot” with the understanding of a “a fifth- or sixth-grader” on foreign policy.

And that’s not to mention the book’s troubling accounts of serious issues such as Trump’s response to the Mueller investigation, his desire to assassinate Syrian President Bashar al-Assad and his nonchalance about key American alliances in Asia.

In response, the White House swung into a familiar routine. On Twitter, Trump claimed the book had already been “discredited and refuted,” argued that stories and quotes in it were “made up frauds” and “a con on the public.” Chief of Staff John Kelly, Defense Secretary James Mattis and Trump lawyer Jay Sekulow backed him up with statements refuting parts of the book, while White House spokeswoman Sarah Huckabee Sanders gave a more polished version of Trump’s argument.

“This book is nothing more than fabricated stories, many by former disgruntled employees, told to make the President look bad,” she said in a statement. “While it is not always pretty, and rare that the press actually covers it, President Trump has broken through the bureaucratic process to deliver unprecedented successes for the American people. Sometimes it is unconventional, but he always gets results.”

(In a statement to the Post, Woodward said, “I stand by my reporting.”)

The response echoed Trump’s approach to the Mueller investigation: scattershot but always aimed at credibility. Neither Trump nor his staffers took pains to spell out specifically what was untrue, staking their critique on a few assertions and then calling the entire thing discredited.

In the same way, Trump has repeatedly attacked the Special Counsel, arguing that the investigation is a “witch hunt” and a “hoax” without addressing the dozens of indictments and guilty pleas or the reams of publicly available evidence in the charging documents.

Not content to merely argue that Woodward has been misled by disgruntled sources, Trump then amped up the criticism, arguing that the reporter, in fact, made up the quotes himself. “He made this up to divide!” he tweeted late on Tuesday.

Ari Fleisher, who was the White House Press Secretary for President George W. Bush from 2001 to 2003, defended Woodward’s ethics as a reporter. “I’ve been on the receiving end of a Bob Woodward book. There were quotes in it I didn’t like,” Fleisher wrote on Twitter. “But never once — never — did I think Woodward made it up. Anonymous sources have looser lips and may take liberties. But Woodward always plays is straight. Someone told it to him.”

That also echoes Trump’s response to the Russia investigation. He’s repeatedly called former FBI Director James Comey, former CIA Director John Brennan, former Director of National Intelligence James Clapper and even his own former staffers liars — typically without explaining exactly why — in a bid to undermine the credibility of their claims against him. During discussions of the Stormy Daniels controversy, Trump’s current lawyer, Rudy Giuliani, even asserted that Trump’s former longtime attorney, Michael Cohen is actually a “pathological liar.”

But calling someone a liar begs the question of motive, which Trump then supplied in a tossed-off aside in a tweet without evidence. “Woodward is a Dem operative? Notice the timing?”

That echoes a similar attack Trump has made against Mueller, a registered Republican who was appointed FBI director by George W. Bush. Trump has repeatedly claimed that Mueller’s team is made up of “angry Democrats” who supported Hillary Clinton in the 2016 election, arguing that their investigation could potentially “wrongfully” affect the midterm elections.

In an Oval Office interview with the conservative Daily Caller after excerpts from Woodward’s book were published by the Washington Post, Trump called the work “just another bad book,” adding Woodward “has had a lot of credibility problems.” Trump said he didn’t get Woodward’s interview requests. “It’s just nasty stuff. I never spoke to him. Maybe I wasn’t given messages that he called. I probably would have spoken to him if he’d called, if he’d gotten through. For some reason I didn’t get messages on it.”

In August, just after the manuscript was complete and being prepared for printing, Trump told Woodward he wanted to talk, in brief phone call that echoed the on-again, off-again approach his team has taken to the question of whether Trump will sit down with Mueller for an interview.

In a transcript of the call published by the Post, Trump said he didn’t get any of Woodward’s earlier requests for an interview. “It’s really too bad, because nobody told me about it, and I would’ve loved to have spoken to you,” he said. Woodward then noted that Republican Sen. Lindsey Graham said that he had told Trump about the request for an interview — something Graham confirmed again on Tuesday — and Trump changed his story in the middle of the phone call. “Senator Graham actually mentioned it quickly in one meeting,” he said.

As the phone call wrapped up, Trump managed to claim that he had and hadn’t been told about the book in a single breath, demonstrating why his own lawyers have been hesitant to sign off on an interview with Mueller under oath. 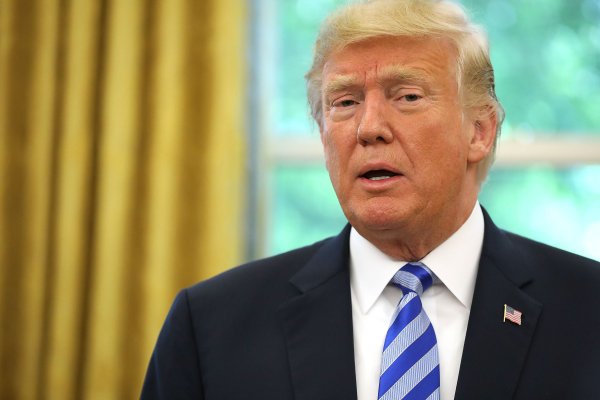