More than 40 states have absentee ballot applications that are not fully accessible to millions of visually impaired voters and those with other disabilities, according to the results of an audit being released by digital accessibility company Deque Systems on Wednesday.

As the coronavirus pandemic and the 2020 election collided this year, states rushed to expand their mail-in voting operations to help people cast ballots and avoid exposure to COVID-19. But while Americans are voting by mail in record numbers, that won’t help everyone. Absentee or mail-in voting has traditionally involved filling out a paper request and a paper ballot—actions that voters who are blind or who have a range of mobility or cognitive disabilities can’t do independently.

This forces these voters to make a difficult choice, according to Christina Brandt-Young, managing attorney at Disability Rights Advocates. They must either give up their right to an independent and private vote by asking for help filling out their ballot, risk exposure to COVID-19 by voting in person, or not vote at all. “Voters without disabilities don’t have to do that. And voters with disabilities shouldn’t have to,” Brandt-Young says.

Absentee ballots, along with election websites and absentee ballot applications, all fall under Title II of the Americans with Disabilities Act (ADA), which says that “any program, service or activity of a government has to be accessible to people with disabilities,” according to Brandt-Young.

Disability rights advocates have filed lawsuits or pushed elections officials to add an accessible absentee ballot option in at least a dozen states this year. Some states, including Maryland, West Virginia and Ohio, had already added accessible absentee systems in previous years. But many states still do not have a fully accessible voting system.

Voters with disabilities typically turn out in lower numbers than those without disabilities, but voter turnout among disabled Americans surged in 2018, and advocacy groups have been hoping to repeat that this year. Research from Rutgers also shows that disability turnout is higher in states with all-mail or no-excuse mail ballot systems than in those that require an excuse, suggesting that voting by mail could be positive for turnout—if it is accessible.

Even for states that have added accessible electronic absentee voting this year, Deque Systems found that they often still point voters toward inaccessible PDF forms in order to apply to use those systems.

The company reviewed the absentee ballot applications available on 43 states’ websites, and found that every state had at least one “critical” issue that would make it nearly impossible for someone using assistive technology, such as a screen reader, to complete the application correctly. Overall, states had an average of 10 critical or serious accessibility issues.

To evaluate the PDF applications, Deque used its own automated accessibility tools, Adobe Acrobat, and a team of experts that included blind individuals who conducted user assessments with screen-reading software. Deque did not audit California, Colorado, Hawaii, Utah or Washington state, some of the states where all registered voters are automatically receiving a mail-in ballot, or Massachusetts or Michigan, which it found have accessible applications.

Some of the issues the team encountered included instructions that couldn’t be logically converted into audio messages by screen-reading software, forms that could not be filled out in their correct order using keyboard commands, and images without any descriptive text for the screen reader to interpret.

While disability rights lawyers say inaccessible ballot applications would likely violate the ADA, Deque Systems CEO Preety Kumar was not interested in filing a lawsuit. “We decided that we would download every single request for a mail-in ballot, see what’s wrong, and fix them and make them available to state election officials,” Kumar says. The company has made accessible versions of the applications available on its website, and Deque staff has reached out to election officials in all the states it reviewed.

Even if these absentee ballot applications are more accessible than the versions currently on states’ websites, disabled voters and advocates say there is a lot more work to do to ensure they can vote safely this year—and in the future. A report by Miami Lighthouse for the Blind this month found that election websites for 12 battleground states do not meet web accessibility guidelines. And several states are still involved in litigation over various other voting access issues.

While the ADA was passed 30 years ago, disability rights attorney Eve Hill notes that part of the problem ensuring the rights it guarantees is there are only two enforcement mechanisms for the law: private people suing and the Justice Department. Since President Donald Trump took office in 2017, the Justice Department has significantly limited its civil rights enforcement.

Leaving it up to nonprofits and private companies to remind states to make voting accessible takes longer, costs more money, and leaves people with disabilities voting at the last minute, Hill says. The National Federation of the Blind, which Hill represents, sent letters to states with inaccessible absentee ballot systems last September, and has continued to press the issue.

“For any state that has ignored this, we’ve told them it’s required over and over again,” Hill says. “They therefore have knowledge of the requirement. And if they ignore it, and people are denied the right to vote absentee privately and independently, they will get sued. And they will have to pay damages to those people.”

Hill says that people with disabilities have gotten used to navigating a series of obstacles in order to vote, but that has caused problems for years, and COVID-19 has made it more clear than ever the situation needs to change.

“For 30 years, they’ve honestly fought tooth and nail against letting us vote in any way,” Hill says. “People have been trying to get the job done more than trying to force the state to make it easier. And we’re tired of that.” 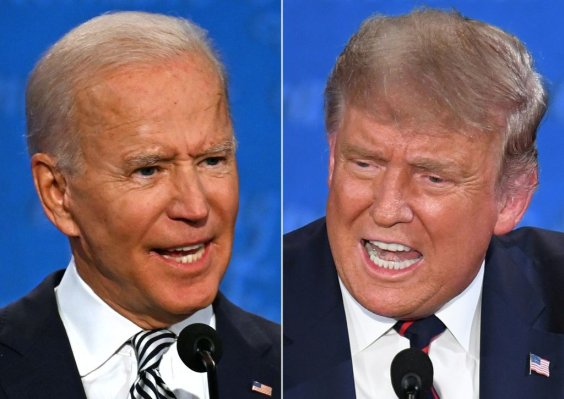 All About the Very Uncivil Tone of the First Debate
Next Up: Editor's Pick