Why Donald Trump Thinks He Can Flip Minnesota

There’s at least one person who thinks President Trump is likely to win Minnesota in November, even though polls show him well behind in the state. “There’s no way that I’m nine points down,” Trump told the enthusiastic crowd that packed an airplane hangar in the small Northern Minnesota town of Bemidji on Friday night.

“This,” the President added, “is not the crowd of somebody that’s going to finish second in this state to Sleepy Joe,” his derisive nickname for Democrat Joe Biden.

A few hours earlier, Biden, too, had appeared in northern Minnesota, touring a union hall outside Duluth and giving a speech about improving the lives of working Americans. The twin visits, which came on the state’s first day of early voting, shone a spotlight on the state that may be 2020’s most intriguing new battleground.

The geographic and demographic trends that enabled Trump to win the Midwestern “blue wall” states of Michigan, Wisconsin and Pennsylvania in 2016—and with them the election—nearly tipped Minnesota, too. The state has a large population of the rural white voters without college degrees who disproportionately support the President, even as urban, nonwhite and college-educated voters trend in the opposite direction. Minnesota was also the origin point for the summer’s racial justice protests after Minneapolis police killed George Floyd, sparking a worldwide movement. Trump’s hopes depend on whether these trends intensify or reverse. That could make Minnesota the bellwether for the clashing political forces of the Trump era.

President Donald Trump speaks to supporters during a rally at the Bemidji Regional Airport in Ohio on Sept. 18, 2020.
Stephen Maturen/Getty Images

No Republican presidential candidate has won Minnesota since 1972. But Trump outperformed expectations to come within 1.5 points in 2016, and his campaign has touted Minnesota as one of its top 2020 pickup targets. Like its Midwestern neighbors, the state has seen its rural areas trend increasingly Republican even as its urban and suburban areas increasingly vote Democratic. Nineteen counties in what’s known as “greater Minnesota”—a term used to refer to areas outside the Twin Cities region, or non-urban areas more generally—flipped from supporting Barack Obama in 2012 to Trump in 2016, even as Hillary Clinton improved on Obama’s margins in Minneapolis and St. Paul.

“It’s sort of a microcosm of the country: as the urban centers get more radical blue, it pushes everyone out here in Greater Minnesota into Trump’s column and into my column,” says Jason Lewis, the Republican nominee for the U.S. Senate seat currently held by Democrat Tina Smith. A former one-term congressman and talk-radio host, Lewis’s campaign signs say “TRUMP ENDORSED.”

Though Lewis is widely seen as a long-shot candidate, he says both he and Trump will benefit from a voter backlash to the protests over Floyd’s death, which consumed Minneapolis over the summer. “The suburbs are coming back, don’t get me wrong, because of the chaos,” Lewis says. “But there’s 2.3 people in the metro [area]; there’s 5.6 million in Minnesota.”

Democrats, however, contend that Trump is likely to lose rather than gain ground in Minnesota this time around. Democratic turnout surged in the 2018 midterms, enabling the party to sweep the governorship and other statewide offices and flip the state House of Representatives. Biden has a 9-point lead in the polling average maintained by FiveThirtyEight. In the Duluth suburb of Hermantown on Friday, Biden emphasized his infrastructure proposals and kinship with working-class voters. “I view this campaign as between Scranton and Park Avenue,” he said, accusing Trump of favoring Wall Street.

The themes of Trump’s speech in Bemidji underscored the widening cultural and demographic gap between urban and rural Minnesota. The President repeatedly cited the Minneapolis protests, which he described as “far-left rioters rampaging across Minneapolis,” as well as the city council’s subsequent attempt to “get rid of” the police force. (A proposal to change the city charter to allow replacing the current police department has been delayed and will not go before voters this November.) Trump also accused Biden of wanting to flood Minnesota with refugees “from the most dangerous places in the world,” and singled out Rep. Ilhan Omar, a Minneapolis Democrat and former Somali refugee, for particular opprobrium.

Northern Minnesota’s Iron Range was once a Democratic bastion thanks to the labor unions whose members worked in its mining industry, which is the source of 85% of American steel production. Democrats’ hold on the region has weakened as they increasingly embrace socially liberal positions, as well as environmental policies that would stifle the area’s extractive industries, including mining, logging and a controversial Northern Minnesota oil pipeline.

But like other Midwestern states, Minnesota’s demographic trend lines appear to cut against Trump. The state’s overwhelmingly white rural areas are losing population, while its diverse, educated cities and suburbs continue to grow. For that reason, most analysts believe the polls are right and Trump is an underdog to win the state.

“There’s certainly a chance Trump wins Minnesota, but how much of a chance is the question,” says Larry Jacobs, a political scientist at the University of Minnesota. “Trump is very strong in the northern part of the state, but his problem is that it’s just not where most of the votes are.” 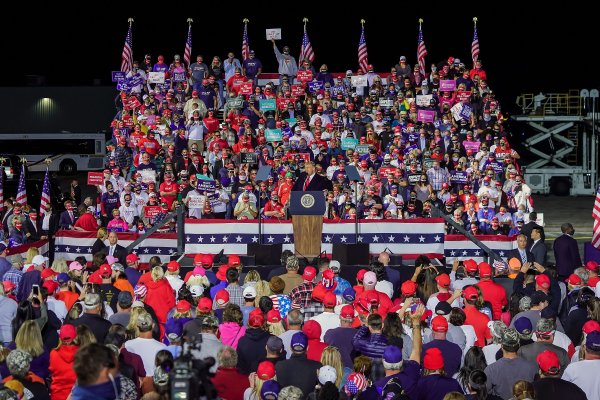 How Trump Is Weaponizing His Supreme Court Pick
Next Up: Editor's Pick