It looked more like a flash mob than a political demonstration. But as thousands of masked and socially distanced Israelis gathered at an anti-corruption rally in Tel Aviv’s Rabin Square on Sunday, an array of opposition politicians belied any impression that this was performance art.

Israel has been mired in a political crisis as far back as December 2018, when Prime Minister Benjamin Netanyahu called early elections just as he was facing corruption charges. Three successive polls have failed to deliver a decisive victory to Netanyahu or any of his rivals, and although Israel’s longest-serving leader has been formally indicted he was embroiled in 11th-hour negotiations to form a new government as the protests took place. On Monday, Netanyahu and his political rival Benny Gantz signed a coalition deal that will involve them rotating the premiership—with Netanyahu serving the first 18 months.

His critics accuse him of undermining Israel’s democratic institutions in a bid to hang onto power. “A person with indictments can’t appoint a police chief, a state prosecutor, an attorney general, the judges who will deal with his case. That is Netanyahu’s list of demands,” opposition lawmaker Yair Lapid told the gathered crowd. “That’s how democracies die in the 21st century. They’re not wiped out by tanks overrunning parliament. They die from within.”

Lapid defected last month from the opposition Blue and White party after its leader Benny Gantz agreed to serve as Israel’s parliamentary speaker, a move widely interpreted as a precursor to a power-sharing deal with Netanyahu. Lapid was one of around 2,000 people who attended the “Black Flag” demonstration in Rabin Square to express their opposition to anti-democratic moves introduced by Netanyahu, according to Israel’s Haaretz newspaper.

Protestors were carefully spaced two meters apart, but the social distancing measures were not the only thing striking about the protest. It brought together a diverse group including former members of Blue and White, including Lapid and Moshe Ya’alon—Netanyahu’s former Defense Minister—alongside left-wing activists, and lawmakers such as Ayman Odeh, who leads a coalition of four Arab-Israeli dominated parties that Netanyahu has attempted to portray as “terror supporters.”

“It’s not easy for me to stand among some of the speakers here tonight, but we need to see the main point – only through a joint Jewish-Arab struggle can we succeed,” Odeh told protesters, adding that the crisis presented “a huge opportunity for a wide Jewish-Arab front for peace and democracy.”

“What connects all the groups and causes is the shout out for Israeli democracy that is being harmed these days by Netanyahu and his allies,” Shaqued Morag, executive director of the anti-occupation group Peace Now tells TIME.

Morag says she sees Netanyahu’s plan to annex swathes of Palestinian territories—a move President Trump greenlit in January—as the principal threat to Israeli democracy. But other demonstrators focused on Netanyahu’s corruption cases, and on the Blue and White leader Benny Gantz, who was negotiating with Netanyahu after having vowed not serve in a government led by a prime minister under indictment.

Like many world leaders, Netanyahu has enjoyed a recent bump in popularity. In a late March poll, the majority of Israelis said they approved of his handling of COVID-19. That included being one of the first world leaders to impose mandatory quarantine on all foreign arrivals.

But his transitional government has also introduced controversial new measures in response to the pandemic. Among them is a new law that allows the country’s internal security agency, the Shin Bet, to trace the cellphones of people believed to have come into contact with COVID-19.

For human rights advocates, the law—which passed without parliamentary debate—constitutes a potentially dangerous expansion of the state’s surveillance apparatus. “We see it as a way in which the occupation leaks from the West Bank to the Israeli society,” says Peace Now’s Morag. “These are tactics that are used in order to govern civic space with military technologies.”

Besides the popularity bump, the COVID-19 crisis has bought Netanyahu several other political benefits: it delayed his corruption trial, which had been scheduled to start on March 17; it also bolstered his calls for the formation of an “Emergency Government” to navigate the pandemic.

In late March, Gantz and Netanyahu were reportedly close to a power-sharing agreement that would have allowed Netanyahu to remain prime minister until September 2021, with Gantz rescinding on a pre-election promise not to work with the indicted Likud leader. Days later, Netanyahu scuppered that deal anyway, imposing a set of last-minute demands.

Netanyahu’s demands now include the power to appoint a police chief, state prosecutor, and attorney general Yapid told protesters, comparing the deterioration of democracy in Israel to the process that has occurred in Hungary and Turkey. 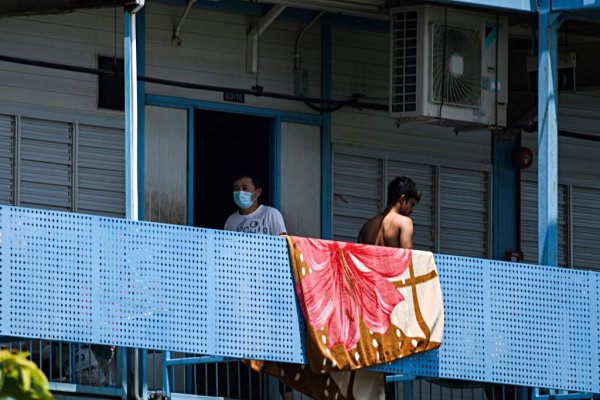 Why Singapore Lost Control of Its Outbreak
Next Up: Editor's Pick