Yoshihide Suga Is Japan's New Prime Minister. Here's What That Means for the U.S.

Yoshihide Suga poses for a portrait following a press conference after being elected the president of the Liberal Democratic Party (LDP) in Tokyo, Japan on Sept. 14, 2020.
Nicolas Datiche—Getty Images
By Amy Gunia

As Japan’s new prime minister, Yoshihide Suga, takes the reins of the world’s third-largest economy this week, he inherits a domestic agenda swamped by the coronavirus pandemic, the country’s biggest economic slump on record and the postponed Tokyo Olympics.

The leader of one of America’s closest allies also steps into a tense geopolitical climate amid rapidly deteriorating U.S.-China relations. Yet experts say this new premier is largely untested in the foreign policy arena.

“Suga is more domestically-oriented and several questions have been raised about his propensity to deal with foreign relations and international issues,” says Donna Weeks, professor of political science at Musashino University in Tokyo.

Suga takes over from the country’s longest-serving prime minister, 65-year-old Shinzo Abe, who resigned due to health reasons.

During Trump’s 2019 visit to Japan, Abe’s pandering made headlines. They played a round of golf (stopping to take a smiling selfie in between holes), ate a hamburger lunch, sat at ringside seats at a sumo competition and then tucked into a Japanese barbecue dinner.

When Abe announced in late August that he was stepping down, Trump was quick to comment on Twitter. He called Abe “the greatest Prime Minister in the history of Japan,” adding that Japan’s “relationship with the USA is the best it has ever been.”

That begs the question: what will a new prime minister mean for U.S.-Japan relations?

A shift from personal politics

Trump’s foreign policy has often been defined by his personal relationships with world leaders, and Abe appears to have fostered among the closest ties to the volatile American President.

Suga, Abe’s longtime chief cabinet secretary, is largely expected to follow in his predecessor’s footsteps when it comes to foreign policy. But he may not be able to replicate the Trump-Abe bromance, not least because he admits he lacks the diplomatic skills.

“Prime Minister Abe’s leadership diplomacy was truly amazing. I don’t think I can match that,” Suga said on Sept. 12, adding that he will continue to consult with Abe on foreign relations.

Still, Suga’s role as Abe’s right-hand man for the last eight years means he has a strong understanding of how to manage the relationship with the U.S., says Yoshikazu Kato, an adjunct associate professor at the University of Hong Kong’s Asia Global Institute.

Yoshihide Suga, president of the Liberal Democratic Party (LDP), middle, receives a round of applause after being elected as Japan's prime minister during an extraordinary session at the lower house of parliament in Tokyo, Japan, on Sept. 16, 2020.
Kiyoshi Ota—Bloomberg/Getty Images

The White House said in a statement that Trump “looks forward to working with Prime Minister Suga to make [relations] even stronger.”

“Suga is less outgoing than Abe, but he knows what he has to do—at least until November,” Michael J. Green, senior vice president for Asia and the Japan Chair at the Washington D.C-based think-tank the Center for Strategic and International Studies (CSIS), tells TIME. “One of [Suga’s] most important jobs for the near term will be managing the constant insults and unpredictability of President Trump.”

The benefits of Abe’s U.S. charm offensive are also up for debate. Trump still imposed aluminum and steel tariffs on Japan, strong-armed Abe into a one-sided trade deal and proposed to quadruple the $2 billion Japan pays for hosting U.S. troops in the country. And Trump withdrew the U.S. from the Trans-Pacific Partnership, a big regional trade deal that Japan had promoted as a way of containing China’s growing influence.

Still, Suga is not a completely unknown quantity in Washington, and has already built relationships with some top U.S. officials. He met U.S. Secretary of State Mike Pompeo in Tokyo in 2018, and visited Washington D.C. last May, meeting Vice President Mike Pence (at the time, Suga’s visit sparked speculation that he was being groomed for a bigger role).

Experts say Suga will be closely watching the U.S. election to determine what a Biden presidency might mean for Japan.

At the outset, the new prime minister may be occupied by trouble at home. The 71-year-old inherits an economy battered by COVID-19, which he will have to attempt to resuscitate despite a shrinking and aging population. He will also have to determine the fate of the postponed Tokyo Olympics.

He said on Sept. 11 that his top priorities will be fighting the virus and turning around the economy.

“I think Suga will focus on COVID-19 first and foremost,” says Weeks, of Musashino University.

Abe faced public scrutiny for his handling of the virus. Although Japan’s response has been more effective than many other nations, many in Japan perceived the national government’s response as too slow. As of Sept. 17, about 1,480 people have died and 77,000 have been infected in Japan.

Even while juggling a busy domestic agenda, Suga will still have to do a balancing act between the U.S. and China, one made no easier by particularly fraught relations between the superpowers.

Jeff Kingston, Director of Asian Studies at Temple University’s Tokyo campus, tells TIME that Suga will prioritize U.S. relations, but he will also seek to maintain the thaw in relations with China. Economic ties between Japan and China had improved under Abe, but historic tensions remain and Chinese incursions into Japanese waters around the disputed Senkaku Islands (known as the Diaoyu Islands in China) have caused agitation.

China expects to deepen cooperation on fighting COVID-19 and to grow economic ties, according to foreign ministry spokesperson Wang Wenbin.

An editorial in late August in the Global Times, a state-run mouthpiece for the Chinese Communist Party, called for closer partnership with Japan amid tense relations with the U.S. “China must win the support of countries like Japan” as it is “faced with strategic containment from the U.S,” it said.

Suga has also said that he wants to resolve some unfinished business on the diplomatic front. Abe had failed in his goal to resolve several wartime legacies, including normalizing ties with North Korea and signing a peace treaty with Russia to formally end their hostilities in World War II.

In early September, Suga told a news conference that he would consider meeting North Korean Leader Kim Jong-Un without preconditions. He said that he wants to “make a breakthrough” on the issue of the abduction of Japanese nationals by Pyongyang in the 1970s and 1980s, a goal that Abe said he regretted not achieving.

As far as North Korea diplomacy on nuclear issues goes, it will be important for Japan to continue working closely with the U.S., says Nakabayashi of Waseda University.

Even as some in Japan worry about the rare uncertainty this new administration brings, experts say the U.S.-Japan alliance is likely to remain stable under Suga.

“If he follows Abe, and that seems likely, he will seek a better economic relationship with China despite differences on security, territory and history and do whatever it takes to keep Uncle Sam engaged to provide security,” says Kingston of Temple University. About 54,000 U.S. troops are deployed in Japan, and the country hosts the U.S. Navy’s Seventh Fleet. Japan’s post-World War II “pacifist” constitution renounced war, and Abe left office without fulfilling long cherished plans to alter the charter.

Plus, says Kristi Govella, an assistant professor of Asian Studies at the University of Hawaii at Mānoa, the foundations of the U.S.-Japan alliance run much deeper than ties between individual leaders.

“The U.S. and Japan share significant interests and values that give them strong incentives to maintain good relations with each other, and this is unlikely to change under a Suga administration,” she says. “Japan is a key U.S. partner in dealing with China and North Korea and maintaining stability in the region more broadly.” 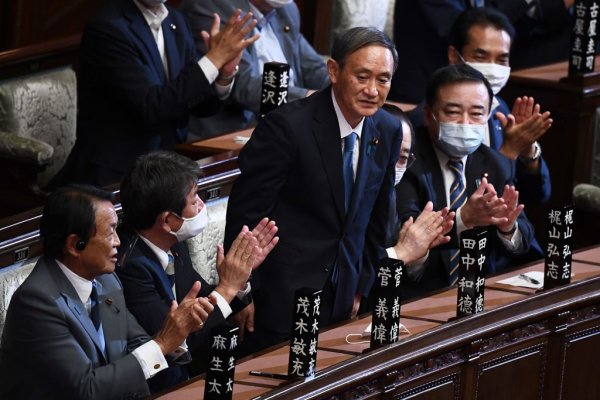