Naomi Osaka’s U.S. Open Masks Showcase One of an Athlete’s Most Powerful Tools for Protest

Naomi Osaka of Japan wears a protective face mask with the name Ahmaud Arbery stenciled on it after winning her Women's Singles third round match on Day Five of the 2020 U.S. Open in New York City.
Al Bello—Getty Images
By Anna Purna Kambhampaty

When Naomi Osaka took the court in the first round of the U.S. Open on Aug. 31, she wore a face mask with Breonna Taylor’s name printed on it. And, she revealed, she’d brought a different such mask for each round of the tournament, each bearing the name of a Black person whose death raised awareness of racial injustice in America. “I actually have seven [masks], and it’s quite sad that seven masks isn’t enough for the amount of names, so hopefully I’ll get to the finals and you can see all of them,” Osaka said after her first win.

On Saturday, that hope will come to fruition, as Osaka faces Victoria Azarenka in the women’s singles finals. Which mask she wears won’t be revealed until the day of, but there’s no longer any doubt that she’ll use the opportunity to make a statement.

Osaka isn’t the only athlete using her clothing to bring awareness to racial injustice this year. Most notably, as part of what has been an unusual basketball season, NBA players were given the option of wearing jerseys with social-justice messages above their numbers in place of their names. The list of 29 pre-approved messages included “Black Lives Matter,” “Say Their Names” and, most popularly, “Equality.” Osaka is also part of a history that dates back far beyond 2020, explains Henry Navarro Delgado, designer and associate professor of fashion at Ryerson University.

Russell Westbrook #0 of the Houston Rockets wears "Black Lives Matter" on the back of his jersey on Aug. 2, 2020 in Lake Buena Vista, Fla.
Mike Ehrmann—Getty Images

In fact, this form of protest—athletes using their outfits to make a statement—in some ways dates back to the Ancient Greeks, Delgado tells TIME. It is very likely that Ancient Greek athletes used dress for political purposes, says Delgado, because “individual athletes often represented rivaling city-states. Those rivalries played out in the games, with each city-state trying to have the most winners to exert their, albeit symbolic, dominance.”

In the centuries that followed, many sports fans became unaccustomed to seeing athletes speak out in this way, Delgado says. That sense of the unexpected lends even more impact to the political messages of recent years—but it is now once again becoming the norm.

Protesting a 2010 Arizona state law that required immigrants to carry registration papers at all times and targeted hirers of undocumented immigrants, the NBA’s Phoenix Suns wore “Los Suns” jerseys in a game against the San Antonio Spurs. “Our players and organization felt that wearing our ‘Los Suns’ jerseys on Cinco de Mayo was a way for our team and our organization to honor our Latino community and the diversity of our league, the State of Arizona, and our nation,” Suns Managing Partner Robert Sarver said in a statement.

Jason Richardson #23 of the Phoenix Suns high-fives teammates Steve Nash #13 and Grant Hill #33 after scoring against the San Antonio Spurs on May 5, 2010 in Phoenix, Ariz.
Christian Petersen—Getty Images

Much of the power of the “Los Suns” jerseys, according to Delgado, came from their being worn by the whole team. Acting as a group can be powerful in any form of protest. But that doesn’t mean individual athletes can’t draw attention by acting on their own. As Delgado puts it, both forms of protest send a strong message, but with a different undertone about whether the larger environment—the sport’s league or players’ union, for example—is supportive.

Case in point: former NFL player Colin Kaepernick, whose best-known protest actions include kneeling and sitting on the bench during the national anthem. Kaepernick acted alone, and the response to that choice made a point about not just the broader United States, but specifically the world of football. And he too, Delgado says, clearly saw that the way he looked could be part of the protest. “You can see that this evolution coincides with him becoming more and more aware of the power that he had because of his visibility. When he started wearing his afro and his cornrows, people were recommending that he clean [up] his act and get a haircut. And he didn’t stop,” Delgado says. “This was a clear messaging of taking pride in being Black.”

Similarly, in 2014, Derrick Rose of the Chicago Bulls stood out by wearing an “I Can’t Breathe” shirt in honor of Eric Garner during the warm-ups before a game. For Rose, his choice came out of feeling a connection to Garner’s story. “My biggest concern is the kids. I know what they’re thinking right now. I was one of those kids. When you live in an area like that and you’ve got no hope,” the athlete said. But though Rose at first acted on his own, he soon influenced others. A slew of other athletes, including NBA players from other teams as well as college and high school players, started to wear “I Can’t Breathe” shirts.

Though this type of messaging can be very effective, according to Delgado, there are moments it might not function in the way it was intended to. Most often, it can go wrong when the person who is trying to send the message is not entirely in tune with what they are promoting. Then, the message is not registered, or it could have a negative connotation and be perceived as a joke. Audiences may also be alienated by the messages.

But the discourse that comes from that disagreement might be exactly what is needed to affect change, Delgado argues.

“Once you put a message out there, you have no control over how the recipient is going to react, but as long as there is a reaction, there is an effect,” he says. “And the goal here is to affect, to create some kind of disruption in whatever narrative is happening at the time.”

As for Osaka, she appears to agree.

“I think tennis, people watch it all around the world and things that we think are common names are probably not common overseas,” she said. “For me, I just want people to have more knowledge. I feel like the platform that I have right now is something that I used to take for granted and I just feel like I should be using it for something.” 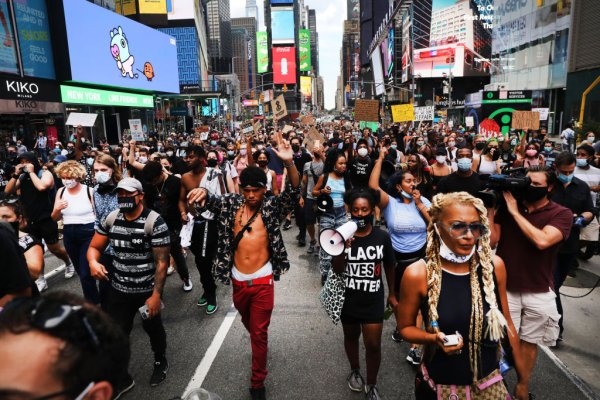 93% of BLM Protests Are Peaceful: Report
Next Up: Editor's Pick