A satellite image of the Northeast Pacific taken by the U.S. National Oceanic and Atmospheric Administration (NOAA) on Sept. 12.
NOAA
By Madeleine Carlisle

Satellite images recently shared by the National Oceanic and Atmospheric Administration (NOAA) show massive amounts of smoke engulfing the Western Coast of the United States and extending hundreds of miles over the Pacific Ocean, as dozens of wildfires continue to ravage California, Oregon and Washington and create dangerous air quality conditions for millions.

The unprecedented wildfires — which experts say are fueled by climate change — have burned hundreds of thousands of acres and killed at least at least 14 people, according to NPR. The fires have also created dangerous air quality conditions in much of the West Coast, and health officials recommend people stay inside whenever possible.

In satellite images taken by NOAA on Thursday and Friday, enormous amounts of smoke created by the fires can be seen extending and spiraling hundreds of miles out over the Pacific Ocean.

On Saturday, NOAA shared another 24-hour time lapse of satellite images, showing the smoke continuing to extend and swirl over the Pacific.

The fires have caused the Pacific Northwest of the U.S. to have some of the most unhealthy air conditions in the world, according to the Associated Press. On Friday, officials at Oregon Occupational Safety and Health department urged employers to stop or delay outdoor work activities due to the dangerous air quality. 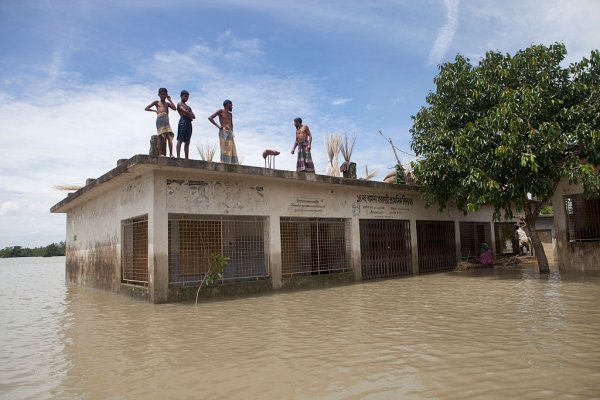 The Reopening Schools Debate Is a Peek at Climate Disruption
Next Up: Editor's Pick