During Fire Season in California, Breathing Feels Like a Luxury

The San Francisco skyline is barely visible through hazy and smoky conditions on Sept. 3, 2020, due to smoke from wildfires raging in California.
Justin Sullivan—Getty Images
By Alana Semuels

For the last few years, fall in California has given residents a glimpse of the apocalypse. Fires burn around us, the air becomes ashy and smells like a campfire, and the sharp edges of landmarks like Alcatraz and the Golden Gate Bridge blur in the hazy air. Taking a deep breath becomes a dodgy proposition that may set off a coughing fit, and the sun appears in the sky like a red moon behind the haze. We close our windows to avoid breathing smoke-infested air, stop going outside, and wear N95 masks—and that was before the pandemic.

If the past few years have been alarming, this year has felt impossible. The three mega-fires burning are among the four biggest in state history, and it’s only early September—fire season often lasts into November. The air quality has become worse as temperatures rise.

Over Labor Day weekend, cities in the Bay Area like Oakland, Livermore, and Redwood City broke heat records, and San Francisco reached 100 degrees. This may not impress people living in Arizona or Florida, or in the humidity of the northeast, but almost no one in the city of San Francisco or along the coast of Northern California has air conditioning. Pacific breezes keep the average July temperature around here at about 67 degrees, so most people just open their windows to cool off.

Since opening windows is not an option now, and since we can’t escape to air-conditioned movie theaters or restaurants because of the pandemic, many of us in Northern California are resorting to desperate measures. One night, it got so hot inside my west-facing San Francisco apartment that I slept outside on the deck for a few hours, wearing a mask. I woke up with gritty ash on my face and spent the next day coughing. I am eight months pregnant, and as my growing baby compresses my lungs, I feel more panicked that neither he nor I can breathe.

“If you aren’t oxygenating properly, your baby isn’t oxygenating properly,” a nurse tells me, suggesting I find access to air conditioning. So one Saturday morning I wandered around Target, sucking in the cool air while hoping I was not breathing in the coronavirus at the same time. By the time my husband and I decided to splurge on a portable air-conditioning unit, every hardware and box store in a 100-mile radius was sold out. A Home Depot clerk told me gleefully over the phone that people were marching out of the store with the remaining fans two by two, as if preparing to board Noah’s Ark.

Other San Francisco residents shared their stories of temporary relief on Twitter: renting a car so they could experience AC, taking a cold shower with their clothes on, soaking their sheets with cold water before going to bed.

People across the American West are experiencing similar misery. On Sept. 8, the air quality in Modesto, in California’s San Joaquin Valley, got a score of 646, or hazardous, which meteorologist Dan Satterfield labeled “the worst air quality I’ve ever seen in the U.S.” The air near Salem, Oregon turned red the same day as haze and smoke moved north. Regions across Colorado issued air quality warnings Monday, and temperatures climbed to 100, even as the region prepped for a freak summer snowstorm.

Before the pandemic, San Francisco was one of the most economically prosperous cities in the world, but this year’s fire season has made one thing clear: no amount of prosperity can save us from the changing climate that is sending temperatures soaring and fueling wildfires. Even driving to a place to cool down can turn hazardous, as hundreds of people camping and boating on a reservoir in the Sierras discovered last weekend when a rapidly expanding fire trapped them in a recreation area. This year, fast-moving fires have forced closures of major roads like Interstate 5 and Highway 101, cutting off routes out of some California towns.

I learned from experience that trying to outdrive the wildfires does not work.

Two years ago, when fires in Sonoma County made the air unbreathable, I drove three hours south to California’s Central Coast to get outside for a walk. When I arrived, the air was hazy and smoke-clogged; I’d escaped the air from the Sonoma fires, but a new fire in the Los Angeles area was creating new billows of smoke. This year, my family rented an Airbnb near Eureka, Calif., four hours north of San Francisco, to access fresh air for a week before Labor Day. As we drove north, past the LNU Lightning Complex Fire, the mountains by the side of the road vanished in the thick smoke and the highways were eerily empty. We considered turning back, but the thought of trying to breathe the air in our stuffy apartment urged us on. The air was marginally better in Eureka, but not for long; one morning, I woke up to find the car coated in gray ash, smoke from yet another fire.

People without the means to get out of town or to buy expensive fans or AC units are far worse off. Low-income Census tracts have lower rates of air conditioning than higher-income ones, a recent study shows. The city of San Francisco set up cooling centers in a handful of libraries with air conditioning, but people using them risk contracting COVID-19. Many beaches were closed across San Francisco, San Mateo, Santa Clara, and Marin Counties because of the pandemic, which meant the ocean could provide no relief. San Francisco’s large number of homeless people cannot heed warnings to limit their outdoor activities; this weekend, in the Tenderloin, they lined the sidewalks, baking under the broiling sun.

The Bay Area has long been known as a hub for innovation and creativity, bringing the world products like Twitter and Facebook and Google, but there has been no cloud-seeding technology deployed to make it rain, no giant drone to spray fire retardant across millions of burning acres. Last spring, California Gov. Gavin Newsom announced he was partnering with a foundation to launch a cash prize for innovative ideas to stop wildfires; the initiative has not yet raised enough funds to even launch the competition. The power company’s best idea has been to turn off power to millions of customers so its equipment doesn’t inadvertently start fires.

The state may lead the way in environmentally friendly policies—we compost our food waste and set standards for automobile fuel efficiency—but those attempts seem laughable in the face of this year’s hazards. It begins to feel like there is no solution for those who composted and bought electric bikes and tried to conserve energy so conscientiously. We’re still spending weeks or months living in hazardous air, and there’s no escape.

I love California; from the first year I lived in the state, in 2006, I could not believe that there was a place with such stunning natural beauty, where people grew lemons in their backyards and where I could jump in the ocean in December. But as I sit inside a stuffy apartment, trying to remember what the state looked like when the outlines of the purple mountains were crisp and when a stiff, clean breeze blew off the sea, I wonder how I can stay when breathing feels like a luxury for more and more months of the year. 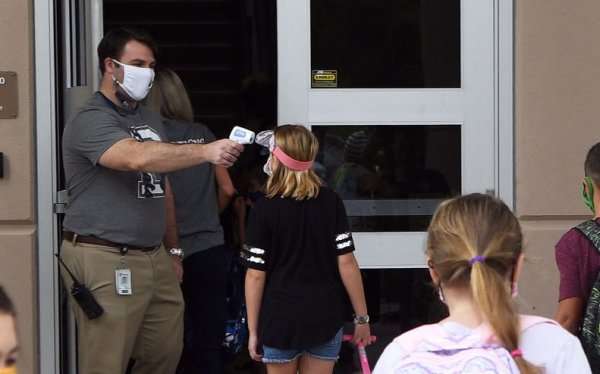 How One Counselor Is Navigating Returning to School
Next Up: Editor's Pick