As COVID-19 continues to spread across the United States, some of the healthcare workers on the frontlines worry they are not equipped with enough protective gear.
Getty Images—iStockphoto
By Abby Vesoulis

At the Southeast Florida emergency room where 62-year-old nurse Penny Blake works, hospital administrators put gloves, cleaning supplies, and N-95 masks behind lock and key because people were stealing them.

Twelve hundred miles away, at Mt. Sinai Hospital in New York City, N-95 masks, which are only supposed to be worn for up to eight hours, are so scarce that doctors are keeping them in their lockers. “Once you get one, the feeling is you keep it for as long as you can,” said Dr. Michelle Lin.

In more than a dozen interviews with TIME, medical professionals from California to New York painted a picture of scarce resources, growing anxieties, and frustrations with hospital administrators and the government for failing to adequately prepare. Chief among their concerns was the lack of personal protective equipment (PPE), including masks, gowns and eye gear. With more than 43,000 confirmed COVID-19 cases in the United States so far, a lack of this gear means they face a high risk of exposure to the virus—which, in turn, means accidentally exposing other patients, their own families, and their colleagues at a time when hospitals cannot afford to have critical personnel on the sidelines.

“The biggest concern we have is that we will not have enough personal protective equipment to take care of the number of patients that are coming in,” says Blake. “And if we can’t protect ourselves, then we’re not going to be able to be there for them.”

Dr. Matthew Baldwin, a critical care physician and pulmonary specialist at New York Presbyterian-Columbia Hospital says he expects the problem to get worse from here. “We’ve had an exponential increase in the number of patients that have come into hospital and have been hospitalized in the last 48 hours,” he told TIME on March 21. “I think there’s genuine concern now, that in the near future, we will run out of personal protective equipment.”

In recent weeks, governors, mayors and public health officials have begged President Donald Trump to address shortages in medical equipment, but they’ve received conflicting messages. On March 18, Trump signed an executive order invoking the Defense Production Act, a 70-year-old law that authorizes presidents to compel American companies to prioritize federal government orders to produce equipment necessary to protect national security over other orders. By March 24, FEMA administrator Peter Gaynor told CNN the law would be used to procure 60,000 more masks. But around the same time that day, the President tweeted he and his team “haven’t had to use it.”

Trump has suggested there was no need for mandatory marching orders because companies, like Fiat Chrysler Automobiles, were already ramping up production of PPE on their own. Trump also said on March 22 that invoking the act would be tantamount to socialism. “The concept of nationalizing our business is not a good concept,” he told reporters.

The Department of Health and Human Services has estimated that if the coronavirus outbreak lasts a year, healthcare providers and patients will require 3.5 billion N-95 masks, which are also called respirators. The U.S. currently has roughly 12 million respirators in its national stockpile.

Blake expresses disappointment in the government in part for failing to adequately prepare for the crisis. “It is part of the federal government’s responsibility to ensure that there are resources out there for protection of their citizens,” she says. “I find it hard to believe that no one foresaw that this could have been a potential need in this day and time.”

In the absence of a coherent national supply chain, states and health care facilities across the country are scrambling to ration what PPE they have. Administrators at hospitals in Seattle and Washington, DC have asked doctors and patients to reuse masks for prolonged periods, while staff at one Chicago hospital have started using washable lab goggles instead of disposable face shields, according to the Washington Post. An article in the American Journal of Infection Control recommends N-95 respirators be put on only five times before they lose their full effectiveness.

“Basically, I’ve been told to wear that same N-95 respirator mask for 24 hours,” an emergency physician working in a Tennessee hospital told TIME. “And if it doesn’t get contaminated, I was supposed to reuse it the next day.” At Mt. Sinai Hospital in New York City, some providers have also begun “reusing masks after shifts,” Lin said. Some have even gone as far as “spraying Lysol on the mask to reuse” it, she adds.

The Tennessee hospital has also moved some of its protective garb, like gowns and face shields, to more secure areas. While the measure is reducing theft, it’s also making it harder for healthcare workers to access the supplies when they need them. Recently, when the trauma physician was treating a critically ill trauma patient with a high risk of blood contamination, she didn’t have time to grab the tools necessary to keep her and her patient safe. “We did not have masks with face shields immediately available,” she says. “That was scary.”

The Centers for Disease Control and Prevention suggested on March 17 that health care providers “might use homemade masks (e.g., bandana, scarf) for care of patients with COVID-19 as a last resort.”

Administrators at both Memorial Sloan Kettering in New York and the Providence St. Joseph hospital chain based in Washington state predicted in mid-March that at least some of their facilities were down to a few days worth of critical PPE supplies.

In Los Angeles County, where there are at least 536 confirmed patients and seven deaths, a nurse who treats a vulnerable population at a large hospital told TIME she’s been instructed to limit how much PPE she uses, and in some cases, acquire her own. “We have been encouraged to go to Home Depot and buy our own eyewear,” she says. She’s also been asked to give blood, as her hospital grapples with a short supply due to fewer blood drive donations in the surrounding areas. “The Red Cross doesn’t have a normal flow of blood donors coming in,” she says. “Our job is blood, sweat and tears.”

In Pittsburg, a labor and delivery nurse tells TIME she is only permitted to wear surgical masks during cesarean sections, despite frequent visits from other staff and unscreened patients who come from at-risk floors. Providers in her department are not given access to the N-95 masks, which provide the best protection against airborne illnesses. “I’m mentally and physically exhausted,” the nurse says. “I’m here to help the community but at the same time, I’m probably exposing them.”

According to staff guidance published by the Mt. Sinai Hospital System last week, asymptomatic employees, “regardless of exposure to a known case of COVID-19” would not be tested for the disease. It would also not test employees with mild symptoms “who do not require hospitalization.” In a statement to TIME, Dr. David L. Reich, the system’s president and chief operating officer defended the protocol, saying that Mt. Sinai is following state and city guidelines. “As priorities shift in the coming weeks, Mount Sinai has the capacity to perform additional testing and we will do so, as directed from our city and state officials,” he said.

The Tennessee doctor, who asked not to be named to avoid retribution by her employer, explained she’s nearing a breaking point. “It’s pretty overwhelming. This is the most anxious I’ve ever felt in my entire life,” she said through tears, adding, “This is the most stressed out I’ve ever been.”

In Italy, where COVID-19 has claimed the lives of more than 6,000 people, according to a Johns Hopkins University tracker, doctors are facing so many serious cases that many are forced to decide which patients are given ventilators, a life-saving breathing machine. There are nowhere near enough ventilators available in either Italy or the U.S. “What I’d like to tell my American colleagues,” Roberto Tonelli, a 31-year-old pulmonologist in Modena, Italy told TIME, “is be prepared for the amount of deaths you will see.”

Back in Florida, Blake is watching Italy closely. “Right now, those of us in healthcare, we all have pre-traumatic stress disorder because we know what’s coming, and we know it’s going to be a storm,” she tells me. She knows that being in her sixties puts her at an increased risk of serious COVID-19 symptoms, she says, but she has no plans to step off the frontlines.

“That’s my job. I went into nursing because I wanted to help people,” she says. “I just feel like I’ve got to get in there and use my personal protective equipment.”

For her sake, and for that of her patients, hopefully she has enough of it. 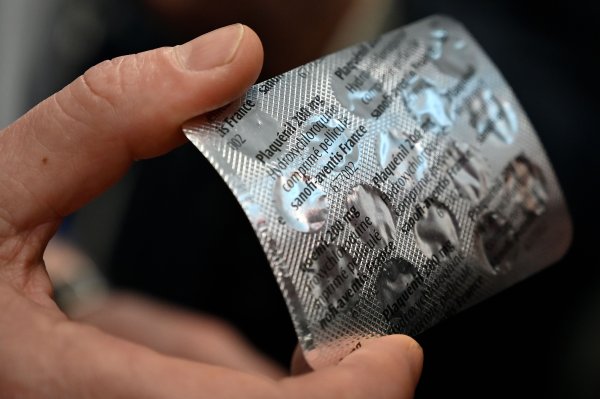 Hydroxychloroquine and Coronavirus: What Experts Say
Next Up: Editor's Pick