Kenosha Is a Test Of Donald Trump's 'Law-and-Order' Message. It Doesn't Seem to Be Working.

President Donald Trump tours an area Tuesday that was damaged during demonstrations after a police officer shot Jacob Blake in Kenosha, Wis., on Sept. 1, 2020.
Evan Vucci—AP
By Charlotte Alter/Kenosha, Wis.

Rolando Morales is the kind of voter that President Donald Trump is desperate to win. A 41-year-old stay-at-home dad in Racine, Wis., Morales voted for Hillary Clinton in 2016, and his wife and her family are solid Democrats. But he’s alarmed by the violence that erupted in nearby Kenosha after police shot Jacob Blake seven times in the back on Aug. 23.

Before Kenosha, “I would have said I would never vote for Trump,” says Morales, gripping a sandwich outside a Jimmy John’s. “Now, it’s like: Maybe. I saw the city get burned down.”

In the aftermath, Trump visited the city to pose in front of burned buildings, denouncing the “anti-police and anti-American riots.” But his true audience was not necessarily the people of Kenosha: it was the white suburban voters who could make or break his chances at re-election.

A peaceful gathering early Tuesday near the site where Jacob Blake was shot by police in Kenosha, Wis., on Sept. 1, 2020.
Patience Zalanga for TIME

Trump won the presidency in large part due to his success in suburban battlegrounds. In 2012, Barack Obama and Mitt Romney fought to a near-draw across suburban areas; in 2016, Trump beat Hillary Clinton in the suburbs by 5 points. But since then, Trump’s support among suburban voters has dipped. In the 2018 midterms, Democrats made huge inroads in the suburbs, winning districts in red states like Kansas and Oklahoma. According to a New York Times/Siena poll in June, Biden led Trump by 16 points in the suburbs, especially among voters with a four-year college degree. Whether or not the President gets a second term hinges on winning these voters back.

“This fall, it’s entirely possible that a surge in Democratic votes in suburban Wisconsin tips the state and the Electoral College,” says Ben Wikler, chair of the Wisconsin Democratic Party.

Which is why the Trump campaign is doing everything it can to scare suburban voters into sticking with him. In recent weeks the dominant theme of his campaign has been stoking fear of unrest and promising “law & order” to anxious white suburbanites. The Republican National Convention highlighted the story of a white St. Louis couple who pointed their guns at Black Lives Matter protesters passing by their home. In one tweet directed at “the Suburban Housewives of America,” Trump said “Biden will destroy your neighborhood and your American dream; I will protect it!” In case the message wasn’t clear, his campaign sent out a text yesterday that read: “ANTIFA THUGS WILL RUIN THE SUBURBS!”

Protestors clash outside a county courthouse after the President departs Kenosha, Wis., on Sept. 1, 2020.
Patience Zalanga for TIME

Kenosha County is a case study of whether this message can work. It’s full of suburbs and exurbs surrounding the main city, Kenosha, that was blighted after Blake’s shooting. Most of the windows downtown are boarded up and tagged with murals and graffiti, and the smell of smoke from burned buildings still hung in the air days after the violence subsided. The county went for Obama by 12 points in 2012 before Trump erased that deficit and barely eked out a win there in 2016; two years later, Democratic Governor Tony Evers won it by 4 points.

So is Trump’s strategy working? Polls paint a murky picture, and it varies by state. Take Pennsylvania: One Monmouth poll in early September showed the race tightening in Trump’s favor in swing and suburban districts in Pennsylvania, while a recent NBC/Marist poll showed Biden leading Trump by nearly 20 points among suburban voters there. A recent ABC News/Ipsos poll found that 80% of Americans were “very” or “somewhat” concerned with the protests, but not in a way that benefited the President: 55% said that Trump’s comments about the protests had made the situation worse, while 59% said Biden would do a better job handling the protests and 56% said Biden would do a better job “keeping me and my family safe.”

And on the ground, Trump’s bet on fear-mongering seems to have met limited success. In dozens of interviews in Kenosha and its surrounding suburbs in recent days, nearly every voter I spoke with agreed that the violent protests were unacceptable. Yet many suburban voters blamed Trump for inciting racial conflict.

Boarded-up windows on businesses let patrons know they are still open in Kenosha, Wis., on Sept. 2, 2020.
Patience Zalanga for TIME

“People here might be concerned about law and order, but they don’t want a President who’s stoking the fire; they don’t want him to pour on kerosene,” says Charlie Sykes, a longtime conservative radio host in Wisconsin and an anti-Trump Republican who is now editor-at-large of The Bulwark. “These really crude race based-appeals just don’t seem like they’re gonna resonate among suburban Wisconsin voters this year.”

Meanwhile, Biden’s denunciation of the violence and his refusal to adopt Black Lives Matter’s demands to defund the police have made it harder to paint him as soft on crime. “Rioting is not protesting. Looting is not protesting. Setting fires is not protesting,” he said in an August 31 speech in the aftermath of Blake’s shooting, before adding: “Do I look to you like a radical socialist with a soft spot for rioters? Really?” (The Trump campaign has to get its story straight: before they were attacking Biden as soft on crime, they were attacking him as too tough on crime, slamming him as “the architect of mass incarceration.”)

But like nearly everything in Trump’s America, both Democrats and Republicans in Kenosha and the surrounding areas saw what they wanted to see in the shooting of Blake and the subsequent racial-justice protests. For Trump supporters, it reinforced the need for law and order; for Biden supporters, the need for new policing policy and national healing. Trump thought it would terrify white voters into coming back to his base; Biden thought it was inspire suburban voters to embrace his message of unity. It turned out to be just another Rorschach test for a tribal nation.

A young boy gets his haircut at the community gathering hosted by Jacob Blake’s family in Kenosha, Wis., on Sept. 1, 2020.
Patience Zalanga for TIME

Supporters of the President said they credited him with ending the violence and voiced skepticism of the Black Lives Matter movement. “Why should Black lives matter any more than anybody else’s?” says JoAnn Clickner, 85, a Trump supporter in nearby Racine. “Miss Black America and Black this and Black that—just obey the law and do what you’re supposed to do.” Clickner says she supports the President because “we need a leader, a ruler who can handle things.”

“Mayhem and anarchy has been going on,” says Rhonda Dutton, a 61-year old retired carpenter who supports the President. “It’s very upsetting to see our town be destroyed for something that could have been easily avoided if you had just obeyed commands.”

But dismay at the damage done by protesters doesn’t necessarily translate into support for Trump. “I cried when I walked through downtown. I think the President is inciting a lot of this racist talk,” says Carole Mills, 75, a retired teacher, on her way out of a Dollar Tree in Kenosha. “There’s a lot of people who don’t like either one, but they’d prefer Biden over Trump.”

A street vendor selling T-shirts observes a crowd of protesters marching near the county courthouse in Kenosha, Wis., on Sept. 1, 2020.
Patience Zalanga for TIME

“The destruction of our beautiful old buildings has been disheartening,” adds Toni Detert, 63, a retired retail manager in Kenosha. Still, she says, Trump’s visit was “a political ploy,” and she plans to vote for Biden.

In fact, Rolando Morales appeared to be a rare specimen in these parts: the unlikely voter whose views may have been swayed by the events of the last few weeks. In more than 50 interviews, he was one of the only people who said he was considering changing his vote because of the events in Kenosha. “The only thing about Trump that’s positive is law and order. We need more of that,” he says.

Yet when pressed, it seemed like Morales was starting to make up his mind. Morales says he wants a President who’s “gonna pull humanity together.” In the end, he says, Biden will probably get his vote. 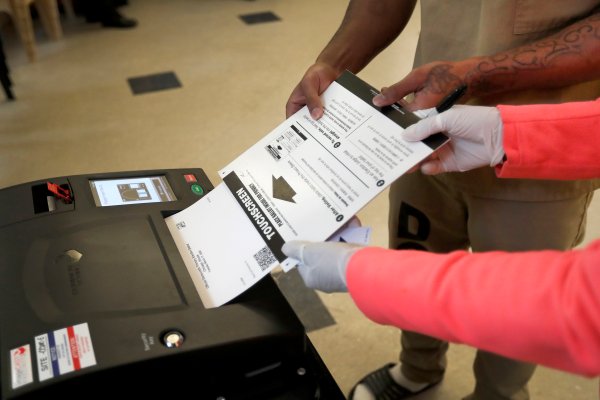 How Advocates Are Pushing to Register Voters in Jail
Next Up: Editor's Pick