Japanese Prime Minister Shinzo Abe bows to the national flag at the start of a press conference announcing he will resign over health problems on August 28, at the prime minister's official residence in Tokyo
Franck Robichon—Pool/AFP/Getty Images
Ideas
By Ian Bremmer
Bremmer is a foreign affairs columnist and editor-at-large at TIME. He is the president of Eurasia Group, a political-risk consultancy, and GZERO Media, a company dedicated to providing intelligent and engaging coverage of international affairs. He teaches applied geopolitics at Columbia University’s School of International and Public Affairs and his most recent book is Us vs. Them: The Failure of Globalism.

The Shinzo Abe era of Japanese politics came to a sudden end in August with the surprise announcement that Japan’s longest-serving prime minister was stepping down to deal with serious (but not life-threatening) health issues. The race to succeed the leader of the world’s third-largest economy is already in full-swing.

It’s hard to call Abe a transformational leader—despite his best efforts, he failed to amend Japan’s constitution to strengthen its military (which it is technically prohibited from possessing under the constitution as it stands now). The territorial disputes that existed at the start of his premiership will outlast him. Japanese-South Korean relations remain deeply troubled. From Tokyo’s vantage point, China represents as great a threat as ever. And the status of the primary alliance that’s supposed to help Japan counterbalance Beijing’s growing dominance in Asia—with the United States—depends more on the mood of the current occupant of the White House than Abe would like, in spite of Abe’s best attempts to put it on more stable footing.

But just because Abe failed to be a transformative politician hasn’t made him a failed one. Under Abe’s watch, Japan’s economy continued to grow modestly, no small feat in the wake of the greatest financial crisis the world had seen in generations… well, until this one. His “Abenomics” helped pull the country out of a deflationary funk, even if the country’s public debt remains at an eye-popping 251.91% (2020 projections), the highest among the world’s advanced industrial economies. And meaningful progress has been made toward opening up Japan’s economy to foreign investment and bringing more women into the workforce, even if much more work is required on both these fronts. These may not seem like massive achievements, but against the backdrop of the geopolitical turmoil of the last decade, they’re nothing to scoff at.

If Abe is lucky, he will primarily be remembered for his strong embrace of multilateralism at a time when it was increasingly under siege around the world. When the U.S. pulled out of the Trans Pacific Partnership (TPP) trade deal, Abe helped hold the pact together with the remaining signatories and get it over the finish line; Abe also forged ahead with the Japan-EU trade deal despite plenty of criticism. Abe turned out to be quite adept at building and fostering relationships with other world leaders. While U.S. support of Japan is not always as steadfast as Japan would like, Abe’s personal diplomacy with Donald Trump has helped Japan avoid much of the ire that has been directed toward other traditional US allies. His outreach to Indian Prime Minister Narendra Modi has helped bolster the prospects of an Indo-Pacific security framework. Abe even managed to use his relationship with China’s Xi Jinping to begin engaging more with China on the economic front, a critical hedge against Washington’s “America First” approach to Asia. Not all his outreach has achieved the desired outcomes—despite a personally warm relationship with Russia’s Vladimir Putin for example, territorial disputes between Japan and Russia stemming from World War II remain as entrenched as ever—but under Abe, Japan became a much more prominent international player. And Abe’s personal diplomacy is a big reason why.

On 14 September, Abe’s party, the Liberal Democratic Party (LDP), will hold elections to replace Abe as its leader, with the winner serving the remainder of Abe’s term, which goes until September 2021, before either stepping down or running for a new, three-year term as LDP president. On 16 September, the Diet, Japan’s national parliament, will vote to install a new prime minister. Given the LDP’s commanding control of the Diet, it is up to this party to decide who runs the country next.

Going into this week, if a nationwide vote was being held, a strong contender to assume the premiership would have been former Defense Minister Ishiba Shigeru, an LDP politician who enjoys wide support among local LDP chapters across the country and the population at large (in a poll earlier this week, he was the candidate the Japanese public would have preferred to see as its next prime minister, and by a large margin). However, Ishiba lacks a large following among LDP Diet members and is a perennial rival and critic of Abe. If the LDP leadership contest was conducted under traditional party rules—where LDP Diet members and local party chapters cast an equal number of votes—Ishiba would have been a much stronger candidate. But under cover of Abe’s sudden announcement, the Covid-19 pandemic, and the resulting economic crisis, the party has opted for a more streamlined process, giving LDP Diet members one vote each (for a total of 394) but greatly reducing the number of votes by local LDP chapters (from 394 to 141).

That made Chief Cabinet Secretary Suga Yoshihide the front-runner; while not a dynamic candidate, the longtime Abe ally has the relationships and skillset to emerge as the consensus candidate among the LDP leadership in this time of crisis. What’s more, while Suga was the preferred choice of just 14% of the Japanese public in that same earlier poll that had Ishiba with a sizeable lead, more recent polling shows him pulling ahead, indicating that voters have come around to Suga as the field of candidates has narrowed and backing for him among many major LDP factions has solidified. Other prominent figures expected to vie for the position have announced they aren’t running, looking to better position themselves to run in the LDP leadership election next year.

What would a Suga victory mean for Japan? On the face of it, not much. As such a prominent member of Abe’s cabinet, Suga would continue Abe’s general trajectory on foreign and domestic policy (and Suga has pledged to do just that). Suga wants more foreign investment (though not so much from China) and is focused on supporting stock prices and the economy as a whole to bolster support for the government in the business community—both domestic and foreign—and the population at large. He also seems more serious than Abe—at least on the margins—about pursuing reform, and has a track record of taking on special interests that stand in the way. For example, he muscled aside Japan’s powerful agricultural lobby to make way for passage of TPP and battled big telecom firms in an effort to reduce mobile telephone costs for consumers. He’s also knocked down resistance in the government bureaucracy to efforts to promote consolidation in Japan’s regional banking sector.

There is one area in which Abe’s absence will be particularly felt, and that is in fostering personal relationships with other world leaders. Abe managed to make Japan a much more influential international player by engaging in frequent, face-to-face interactions with his foreign counterparts. In fact, he often won larger praise from the Japanese public for his work abroad than for his work at home. Suga is a meat-and-potatoes (maguro-and-rice?), domestically-focused politician and unlikely to spend as much effort as Abe on international diplomacy. This is not to say that he is not a capable and savvy political operator, or that he will delegate foreign policy and the relationship-building that is so critical to it. But he would need time to grow into the role of being Japan’s face to the world and hand-shaker-in-chief. That very much matters in a G-Zero world where vocal and effective supporters of multilateralism are fast dwindling (Angela Merkel’s imminent departure in Germany leaps to mind); Japan and the world need Suga to roll up his sleeves and dive right into global politics. We’ll see if he’s up for that.

Ishiba is very unlikely to pull out the win given the LDP’s voting process. But that might be a blessing in disguise for him. Depending on how badly things deteriorate over the next year—and with a pandemic and economic crisis that are both proving hard control, that is a serious possibility—Ishiba might be better served letting Suga take control of the country for the next 12 months. In times of crisis it can often be easier to run as the challenger rather than the incumbent.

Today, Japan and Germany are the staunchest defenders of the post-war world order. And both are now about to lose their longstanding leaders. The countries themselves will be fine—both Japan and Germany have the domestic political stability to transition smoothly to whatever comes next. The bigger question is how well the world order around them can handle that same transition. 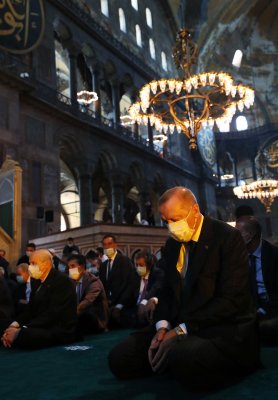 Erdogan’s Worrying Love for Ottoman Empire
Next Up: Editor's Pick