Businesses remain boarded up in mid-Manhattan, with U.S. unemployment at 11.1% in June
Elizabeth Bick
Ideas
By Ian Bremmer
Bremmer is a foreign affairs columnist and editor-at-large at TIME. He is the president of Eurasia Group, a political-risk consultancy, and GZERO Media, a company dedicated to providing intelligent and engaging coverage of international affairs. He teaches applied geopolitics at Columbia University’s School of International and Public Affairs and his most recent book is Us vs. Them: The Failure of Globalism.

The world is confused and frightened. COVID-19 infections are on the rise across the U.S. and around the world, even in countries that once thought they had contained the virus. The outlook for the next year is at best uncertain; countries are rushing to produce and distribute vaccines at breakneck speeds, some opting to bypass critical phase trials. Meanwhile, unemployment numbers remain dizzyingly high, even as the U.S. stock market continues to defy gravity. We’re headed into a global depression–a period of economic misery that few living people have experienced.

We’re not talking about Hoovervilles. Today the U.S. and most of the world have a sturdy middle class. We have social safety nets that didn’t exist nine decades ago. Fortunately, that’s true even for developing countries. Most governments today accept a deep economic interdependence among nations created by decades of trade and investment globalization. But those expecting a so-called V-shaped economic recovery, a scenario in which vaccinemakers conquer COVID-19 and everybody goes straight back to work, or even a smooth and steady longer-term bounce-back like the one that followed the global financial crisis a decade ago, are going to be disappointed.

Let’s start with the word depression. There is no commonly accepted definition of the term. That’s not surprising, given how rarely we experience catastrophes of this magnitude. But there are three factors that separate a true economic depression from a mere recession. First, the impact is global. Second, it cuts deeper into livelihoods than any recession we’ve faced in our lifetimes. Third, its bad effects will linger longer.

A depression is not a period of uninterrupted economic contraction. There can be periods of temporary progress within it that create the appearance of recovery. The Great Depression of the 1930s began with the stock-market crash of October 1929 and continued into the early 1940s, when World War II created the basis for new growth. That period included two separate economic drops: first from 1929 to 1933, and then again from May 1937 into 1938. As in the 1930s, we’re likely to see moments of expansion in this period of depression.

Depressions don’t just generate ugly stats and send buyers and sellers into hibernation. They change the way we live. The Great Recession created very little lasting change. Some elected leaders around the world now speak more often about wealth inequality, but few have done much to address it. Large segments of society, particularly people who weren’t already on the verge of retirement, were able to hunker down and later return to the same approach to saving and investing they practiced before the crisis. They were rewarded with a period of solid, long-lasting recovery. That’s very different from the current crisis. COVID-19 fears will bring lasting changes to public attitudes toward all activities that involve crowds of people and how we work on a daily basis; it will also permanently change America’s competitive position in the world and raise profound uncertainty about U.S.-China relations going forward.

In addition, political dysfunction–in the U.S. and around the world–is more severe than in 2008–2009. As the financial crisis took hold, there was no debate among Democrats and Republicans about whether the emergency was real. In 2020, there is little consensus on what to do and how to do it.

Return to our definition of an economic depression. First, the current slowdown is without doubt global. Most postwar U.S. recessions have limited their worst effects to the domestic economy. But most were the result of domestic inflation or a tightening of national credit markets. That is not the case with COVID-19 and the current global slowdown. This is a synchronized crisis, and just as the relentless rise of China over the past four decades has lifted many boats in richer and poorer countries alike, so slowdowns in China, the U.S. and Europe will have global impact on our globalized world. This coronavirus has ravaged every major economy in the world. Its impact is felt everywhere.

Social safety nets are now being tested as never before. Some will break. Health care systems, particularly in poorer countries, are already buckling under the strain. As they struggle to cope with the human toll of this slowdown, governments will default on debt. For all these reasons, middle-income and developing countries are especially vulnerable, but the debt burdens and likelihood of defaults will pressure the entire global financial system.

The second defining characteristic of a depression: the economic impact of COVID-19 will cut deeper than any recession in living memory. The monetary-policy report submitted to Congress in June by the Federal Reserve noted that the “severity, scope, and speed of the ensuing downturn in economic activity have been significantly worse than any recession since World War II.” Payroll employment fell an unprecedented 22 million in March and April before adding back 7.5 million jobs in May and June. The unemployment rate jumped to 14.7% in April, the highest level since the Great Depression, before recovering to 11.1% in June.

Now for the bad news. First, that data reflects conditions from mid-June–before the most recent spike in COVID-19 cases across the American South and West that has caused at least a temporary stall in the recovery. Signs of corporate economic distress are mounting. And second and third waves of coronavirus infections could throw many more people out of work. In short, there will be no sustainable recovery until the virus is fully contained. That probably means a vaccine. Even when there is a vaccine, it won’t flip a switch bringing the world back to normal. Some will have the vaccine before others do. Some who are offered it won’t take it. Recovery will come by fits and starts.

Leaving aside the unique problem of measuring the unemployment rate during a once-in-a-century pandemic, there is a more important warning sign here. The Bureau of Labor Statistics report also noted that the share of job losses classified as “temporary” fell from 88.6% in April and May to 78.6% in June. In other words, a larger percentage of the workers stuck in that (still historically high) unemployment rate won’t have jobs to return to. That trend is likely to last because COVID-19 will force many more businesses to close their doors for good, and governments won’t keep writing bailout checks indefinitely.

These factors lead us toward the third definition of depression: a slowdown that will last longer than recessions of the past 80 years. The Congressional Budget Office has warned that the unemployment rate will remain stubbornly high for the next decade, and economic output will remain depressed for years unless changes are made to the way government taxes and spends. Those sorts of changes will depend on broad recognition that emergency measures won’t be nearly enough to restore the U.S. economy to health. What’s true in the U.S. will be true everywhere else.

In the early days of the pandemic, the G-7 governments and their central banks moved quickly to support workers and businesses with income support and credit lines in hopes of tiding them over until they could safely resume normal business. The Fed, European Central Bank, Bank of England and Bank of Japan threw out the rule book to add unprecedented support to ensure markets could continue to function.

This liquidity support (along with optimism about a vaccine) has boosted financial markets and may well continue to elevate stocks. But this financial bridge isn’t big enough to span the gap from past to future economic vitality because COVID-19 has created a crisis for the real economy. Both supply and demand have sustained sudden and deep damage. And it will become progressively harder politically to impose second and third lockdowns.

That’s why the shape of economic recovery will be a kind of ugly “jagged swoosh,” a shape that reflects a yearslong stop-start recovery process and a global economy that will inevitably reopen in stages until a vaccine is in place and distributed globally.

What could world leaders do to shorten this global depression? They could resist the urge to tell their people that brighter days are just around the corner. People need leaders to take responsibility for tough decisions.

From a practical standpoint, governments could do more to coordinate virus-containment plans. But they could also prepare for the need to help the poorest and hardest-hit countries avoid the worst of the virus and the economic contraction by investing the sums needed to keep these countries on their feet. Today’s lack of international leadership makes matters worse. If COVID-19 can teach world leaders the value of working together to avoid common catastrophes, future global emergencies will be that much easier to manage for the good of all. Unfortunately, that’s not the path we’re on. 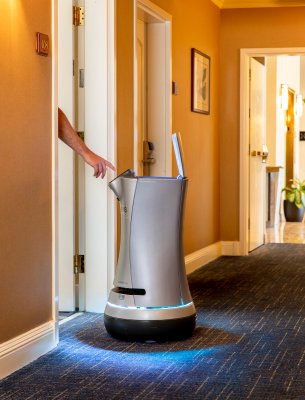 Millions of Americans Have Lost Jobs in the Pandemic—And Robots and AI Are Replacing Them Faster Than Ever
Next Up: Editor's Pick