The German occupation of Norway from 1940 to 1945 witnessed a remarkable building campaign to align this northern land with Hitler’s New Order. From gleaming highways and ideal cities to maternity centers for a purified Nordic race, plans to remake Norway into a model “Aryan” society fired the imagination of Nazi leaders.

These projects have a great deal to tell us about how Hitler and his henchmen envisioned the world under the swastika, which they had begun to construct in Norway. As the Greater German Reich expanded and stretched beyond the Arctic Circle, the Nazis wasted no time leaving their mark on the new territories. Their efforts to reshape occupied Norway, including everyday spaces where people lived and worked, give us a preview of the deeply ideological environments Hitler foresaw emerging in the wake of his ultimate victory, even in those nations he considered potential allies.

The Nazis believed that Norwegians were racially (although not culturally) superior to Germans, and Hitler hoped to win them over to his worldview. Rather than deploy the policies of mass extermination and slave labor used in Eastern Europe, he courted them using propaganda and incentives. With ambitious architecture and infrastructure projects, Hitler sought to literally and figuratively build bridges to Norway’s citizens, bringing them into the fold of his Greater German Reich. Yet despite claims made by the occupiers that Norwegians and Germans shared a special bond as Nordic brothers, Hitler’s construction schemes expose a deeply colonial mindset.

Within months of the April 1940 invasion, the Nazis had begun to develop sweeping plans for the transformation of Norway’s towns and landscapes. They viewed these changes to the physical environment as preconditions for the incorporation of Norwegians into the Greater German Reich and, importantly, also for the long-term presence of German rulers in this northern land. The Nazis had no intention of withdrawing, even as they publicly promised the Norwegians that the occupation was only a temporary measure to “protect” them from British aggression.

New Trondheim was the most grandiose of the projects, an entirely new city for Germans that Hitler commissioned Albert Speer to design on the Trondheim Fjord, which was also the intended site of a vast new German naval base. Hitler imagined New Trondheim as the German cultural hub of the north, and thus “fabulously built,” as he told Joseph Goebbels, with a German art museum and opera house as well as other luxurious amenities. Among the attractions of this location was the neighboring city of Trondheim and its association with the Vikings, a legacy the Germans wanted to appropriate for themselves. Knowledge about the new city and naval base was tightly controlled to avoid provoking the Norwegian resistance.

The Nazis’ desire to create ideal urban environments in occupied Norway—whether for the German rulers or the occupied Norwegians—underscores the importance of town planning for Hitler and his architects, who treated urban spaces as stage sets for the performance of the Volksgemeinschaft, the racial community. Even before seizing power, Hitler had begun to sketch out the architectural foundations for a new Germany, which later also shaped his ideas of empire building. The Germans invested considerable resources to create physical environments that would support a new social order in occupied Norway.

Although the occupiers did plan monumental projects, their broader strategy for intervening in Norwegian towns focused more on coopting existing environments rather than on erecting edifices that stood apart from their sites. We see this clearly in the reconstruction schemes for 23 Norwegian towns damaged in the 1940 invasion. Albert Speer oversaw the Norwegian architects tasked with rebuilding, who were expected to produce designs in accordance with town-planning principles developed in Nazi Germany. As in Germany, Speer favored neoclassical styles for public structures, including those meant to house new Nazi institutions, but he also accommodated Norwegian ideas of placemaking. Above all, the power of racial ideology in these reconstructed Norwegian towns derived from Nazi values becoming embedded into everyday spaces and everyday lives.

Even as Hitler reassured Vidkun Quisling, the head of Norway’s puppet government, that Norway would soon regain her independence, the Germans settled in for the long term. Beyond the cultural metropolis envisioned for themselves on the Trondheim Fjord, the creation of other exclusive German spaces indicates the occupiers’ attention to their own needs as rulers. Among these projects were the Soldatenheime, cultural and recreational centers that Hitler commissioned for the 400,000 German troops stationed in Norway. Generously designed and furnished, with theaters that showed German films, restaurants that served German food and walls that were decorated with German art, the Soldatenheime represented self-contained German worlds that reinforced the troops’ national identity in a foreign land.

If the German occupiers, despite their ideology of Nordic brotherhood, kept themselves spatially and culturally apart as rulers, they promoted fraternization of another sort. Occupied Norway became a locus of the Lebensborn program, initiated in Germany by SS leader Heinrich Himmler in 1935 to encourage the birth of Aryan babies. Intending to harvest the Norwegians’ supposedly superior genes to improve the racial health of the German population, the Nazis established more maternity centers in Norway than in any other country, including Germany. Treating these children like other natural resources in Norway that could benefit the Fatherland, the Nazis devised a pipeline that sent hundreds of babies from Norway to Germany during the war years.

While Norwegian babies flowed southward, Germans moved northward. Among other infrastructure projects, Hitler commissioned a superhighway that would have stretched from Trondheim to Berlin. Such transportation systems would have tethered the peripheries of Hitler’s European empire to its center, Berlin. The superhighway to Trondheim was also designed to encourage German tourists, driving their Volkswagens, to familiarize themselves with the northern reaches of their empire. Hitler believed that, in the wake of his victorious armies, this type of road travel would help Germans identify with the new territories of the Greater German Reich, preparing them to fight to retain them in the future.

When we look to Norway, we see not only the Nazis’ self-serving ideals of Nordic brotherhood taking form, but also, more broadly, how they envisioned their relationship to the conquered regions—especially the North, a place both physical and mystical to them. The Nazis considered the invasion of Norway to be a homecoming: they claimed that Germans had originated in the North and were finally returning, making the land their own again. Building was central to their strategy of dominance and re-appropriation. For all these reasons, the occupying Nazis invested enormous resources in the effort to remodel Norway. Ultimately, that transformation was in the service of their imagined Aryan empire and their role as its masters. That empire, thankfully, never came to be—but in these northern building blocks lies a striking clue as to the depth of Nazi desire to create total worlds. 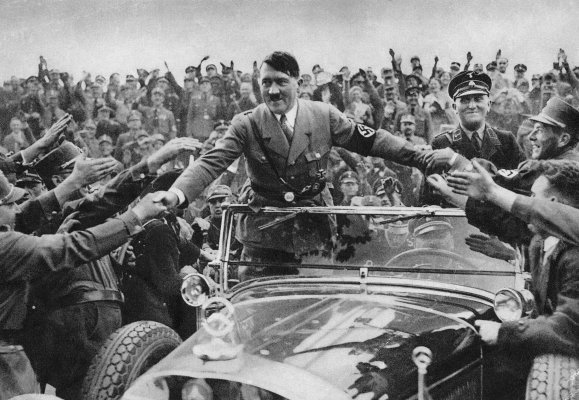 The Lesson of Hitler’s Unlikely Rise to Power
Next Up: Editor's Pick