SECRET STORYTELLER: The author known as Elena Ferrante (not pictured here, or anywhere) returns with a new novel
Elizaveta Porodina for TIME
By Belinda Luscombe

Mistakes, in Elena Ferrante’s new novel, are like prized family jewels, handed down from one generation to another. Both tend to cause strife and reveal weaknesses, but they’re also very hard to let go of. In The Lying Life of Adults, the latest work from the Italian author to be translated into English, Ferrante builds on the coming-of-age themes of her venerated Neapolitan series: the ferocious inner lives of young women, and how the things they inherit—be they beauty, brains or bracelets—are both a blessing and a curse.

The first of the Neapolitan quartet, My Brilliant Friend, thrust Ferrante into the limelight 28 years into her career. An unlikely sensation even before it was published in English in 2012, the book generated a rare appetite for translated literary fiction. It was swiftly followed by three sequels—all set against the backdrop of postwar Italy—and, in 2018, an HBO series. Recently, Netflix announced plans for a series based on The Lying Life of Adults.

Through all her success, Ferrante has hidden her true identity, with English-language media often relying on translator Ann Goldstein to speak about the books. Several theories have arisen as to who might be behind the nom de plume—including that she is actually a man (which she has denounced as sexist)—but none have so far been confirmed by the author. Anonymity in an age when nearly every-one carries a camera at all times is so unusual that the decision to remain unidentified has become part of the old-world appeal of her work. At the same time, the choice feels hyper-modern: it offers her the security to write about unpalatable realities, to explore the less civilized underbelly of the human psyche and especially to unpack the darker regions of female hearts. Precisely because of her obfuscation, Ferrante can tell the truth without fear.

The way stories are told to hide or highlight certain details—skills Ferrante has surely picked up in her own life—is at the heart of The Lying Lives of Adults. Giovanna, whose adolescence is tracked in the three or so years of the book’s arc, telegraphs what kind of narrator she is going to be at the outset. “Two years before leaving home,” the story opens, “my father said to my mother that I was very ugly.” Of course, it is soon revealed that that was not exactly what he said, and that he apologizes profusely afterward, and that although he is an imperfect human, he is not such a terrible father. But to a 13-year-old girl, those are less important details than the emotion her father raises in her.

As all adolescents inevitably do, Giovanna discovers that her accomplished teacher parents aren’t quite as flawless as her first dozen years of experience have suggested, nor are all their stories true. Maybe her parents’ marriage isn’t completely idyllic, maybe her father’s estranged family wasn’t that bad, maybe not all people—even those as highly educated as her father—can be swung by the power of reason. Maybe sex is not simply a physical act. Maybe there is a God.

Giovanna’s first inkling that her parents might not be reliable sources arrives when she meets the object of her father’s deepest revulsion, his sister Vittoria. A single woman living in the beaten-down apartment where the siblings grew up, Vittoria has not extricated herself, as Giovanna’s father has, from either the social or physical lower echelons of Naples. To get to her aunt’s house, our narrator literally has to go downhill. Giovanna’s father conjured Vittoria’s face when he insulted his daughter, a comparison so terrifying to the girl that it inflames her entire sense of self. But when she finally meets her aunt, she’s fascinated. “Vittoria seemed to me to have a beauty so unbearable,” she explains, “that to consider her ugly became a necessity.” Emerging from a childhood governed by the detached rationality of her father, the teenager is ignited by Vittoria’s passionate candor. She follows her long-lost family member into a captivating world where feelings are what matter most.

To a U.S. reader, the divisions that rend Giovanna’s elders may feel reminiscent of the widening gulf that divides the U.S., with one side accusing the other of being lowlifes who don’t know the truth and the other retorting that at least they’re not elitists who hide it. Navigating the politics of her own circle, Giovanna changes her -allegiance based on what serves her in the moment. She proves neither a loyal daughter to her parents nor a fully obedient spy to her aunt—that is, she learns to lie like an adult.

The shoals of brutality that live beneath the surface of outwardly civilized people are familiar territory for fans of Ferrante. The Neapolitan series traced the lives of two friends, Lina and Lenú, and their sometimes destructive relationships and ruthless inter-actions. If the Neapolitan novels represented the span of late 20th century womanhood, The Lying Life of Adults takes a magnifying glass to the difficult patch of terrain that girls have to negotiate when they move, as the old sex-education movies like to put it, from girl to woman.

Ferrante sugarcoats little of this rite of passage. Even such romance-infused interludes as first love and sexual discovery are dark experiences. Giovanna undergoes a period of self-loathing so deep that she experiences “a very violent need for degradation,” she says, “a fearless degradation, a yearning to feel heroically vile.” Her first sexual experiences disgust her, yet she seeks more; she pursues young men to whom she is not attracted and describes falling in love as a “violent pain in my chest.” Puberty stinks, and it stinks worse in a disintegrating family.

Although set in the early 1990s, the novel does not feel contemporary. The young characters’ lack of political awareness and digital devices evokes nostalgia for an extinct type of less mediated childhood. But it has a timeless quality—the turmoil, judgment and bewildering choices that girls face as their bodies morph and their minds begin to explore independent thought are eternal. It’s a coming-of-age novel, yes, but not for those who are coming of age. Ferrante raises a periscope into the ferocious inner workings of adolescent minds and spirits as they discover that the human body, “agitated by the life that writhes within, consuming it, does stupid things that it shouldn’t do.” If there is a moral for the type of educated readers represented perhaps by Giovanna’s parents, it is this: adults cannot sculpt how their children turn out, no matter how diligently they work at it. They can just watch them, worry about them—and be careful how they talk about their sisters around them. 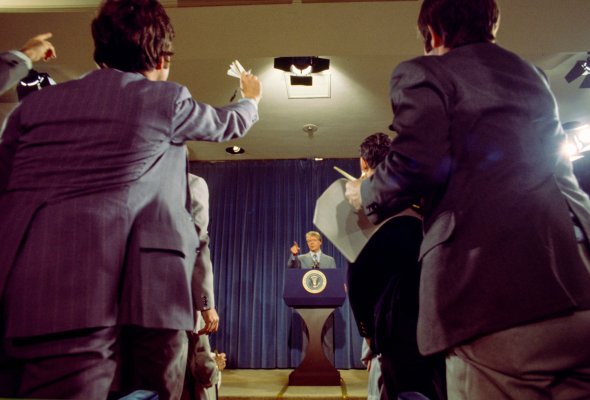 Carter Tried to Make it Easier to Vote in 1977
Next Up: Editor's Pick